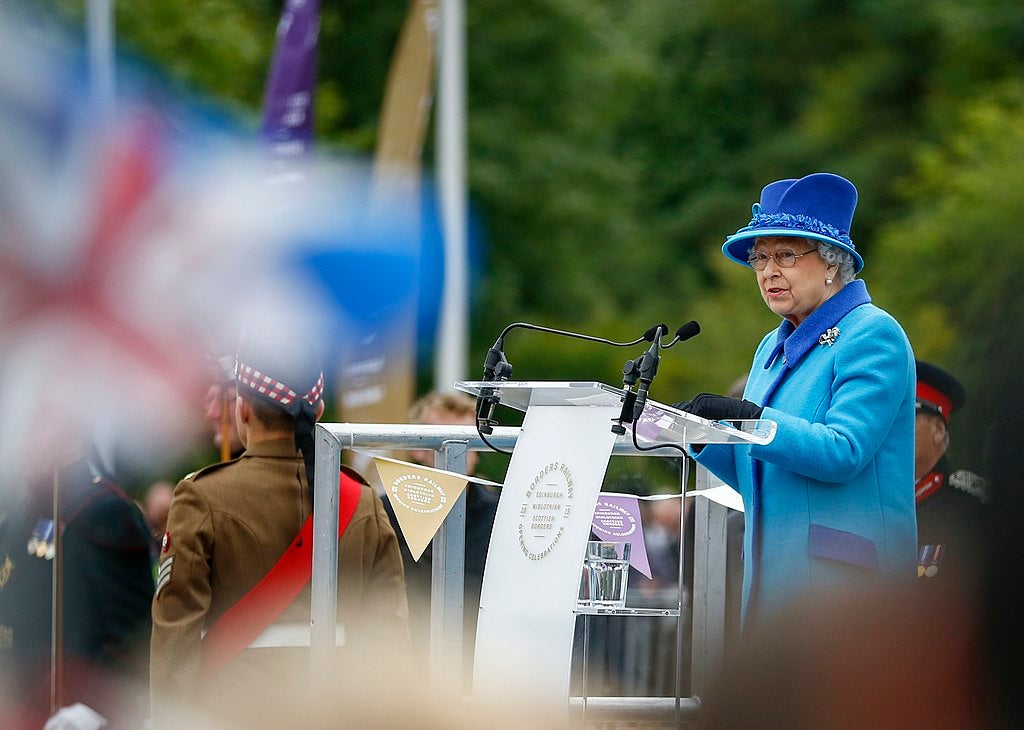 The Queen opening the Borders Railway on the day she became the longest-reigning British monarch, 2015. In her speech, she said she had never aspired to achieve that milestone.

For almost 69 years, Queen Elizabeth II has sat on the throne in England and dedicated her life to serving her people. She celebrated her 96th birthday on April 21 as the longest-reigning monarch of the United Kingdom and 15 other Commonwealth realms; it is hard to believe that she was never expected to wear the crown when she was born.

While she was third in line at the time, her uncle, King Edward VIII, was the sitting king when he met American Wallis Simpson. It was expected that King Edward VIII would marry and have his children who would take precedence over Elizabeth, but he only had eyes for Wallis. Since Simpson was divorced, the king would not be allowed to marry her; thus, King Edward abdicated the throne for love to his younger brother, who would become King George VI. After ruling for 18 years before falling ill, Elizabeth, the oldest daughter of King George, would step up and become the Queen we know today.

In 1944 with World War II in full scale, when Elizabeth turned 18, she wanted to do her part to support her country. At the time, unmarried women under 30 in England were required to join the effort, work the land or industry. Elizabeth chose the war efforts. She joined the Auxiliary Territorial Service (ATS or the women’s branch of the British Army), where she trained as a mechanic. A few months later, the war in Europe would end, making Elizabeth the only female royal family member to serve in the military.

A few years later, her mechanic training would come in handy when she and Prince Philips’s entourage would have engine troubles on a trip to Kenya. After they pulled to the side of the road, it would be said that Elizabeth told the driver to pop the hood and began giving instructions on how to fix the issue. Then, with the driver looking stunned, she responds, “it’s ok. I was a mechanic during the war.”

From there, she would go on to serve her country and the commonwealth, often putting them before her own family. She serves as a patron of more than 600 charity organizations in which she helps to bring public attention to these causes. Her work to raise money for them will impact world poverty as her legacy for years to come. In the last several years, she has begun to pass many patronages to other royal family members to ensure a royal patron always represents them.

Over the years, she had been encouraged to step down from royal duties to allow her son, Prince Charles, to take the throne as her mobility had become restricted. In each case, she had refused to do so, citing that when she was coronated in 1953, Elizabeth took an oath to serve her people and continue to do so until she died.

Queen Elizabeth II is the longest-reigning British monarch beating Queen Elizabeth I, who held the throne for 63 years and was the longest-serving female head of state in history. Queen Elizabeth is also the last surviving head of state who served during WWII. Her husband of 73 years, Prince Phillip, passed away in 2021. They will be laid to rest together in the King George VI memorial chapel in Windsor with her parents and sister when the time comes. Following her on the throne will be her eldest son, Charles, Prince of Wales, followed by her grandson Prince William.