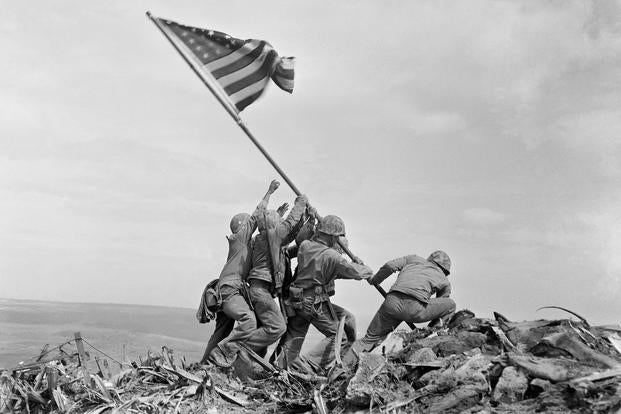 No historical account of World War II would be complete without covering the Battle of Iwo Jima.

At first glance, it seems similar to many other battles that happened late in the Pacific War: American troops fiercely fought their way through booby traps, Banzai charges and surprise attacks while stalwart dug-in Japanese defenders struggled against overwhelming U.S. power in the air, on land and by sea.

For the United States Marine Corps, however, the Battle of Iwo Jima was more than one more island in a string of battles in an island-hopping campaign. The Pacific War was one of the most brutal in the history of mankind, and nowhere was that more apparent than on Iwo Jima in February 1945.

After three years of fighting, U.S. troops didn’t know the end was near for the Japanese Empire. For them, every island was part of the preparation they needed to invade mainland Japan.

The 36-day fight for Iwo Jima led Adm. Chester Nimitz to give the now-immortal praise, “Uncommon valor was a common virtue.”

Here are six reasons why the battle is so important to Marines:

1. It was the first invasion of the Japanese Home Islands.

The Japanese Empire controlled many islands in the Pacific area. Saipan, Peleliu and other islands were either sold to Japan after World War I or it was given control of them by the League of Nations. Then, it started invading others.

Iwo Jima was different. Though technically far from the Japanese Home Islands, it is considered to be part of Tokyo and is administered as part of its subprefecture.

After three years of taking control of islands previously captured by the Japanese, the Marines were finally taking part of the Japanese capital.

Taking the island meant more than a symbolic capture of the Japanese homeland. It meant the U.S. could launch bombing runs from Iwo Jima’s strategic airfields, as the tiny island was directly under the flight path of B-29 Superfortresses from Guam, Saipan and the Mariana Islands.

Now, the Army Air Forces would be able to make bombing runs without a Japanese garrison at Iwo Jima warning the mainland about the danger to come. It also meant American bombers could fly over Japan with fighter escorts.

3. It was one of the bloodiest battles in the history of the Marine Corps.

Iwo Jima is a small island, covering roughly eight square kilometers. It was defended by 20,000 Japanese soldiers who spent a year digging in, creating miles of tunnels beneath the volcanic rock, and who were ready to fight to the last man.

When the battle was over, 6,800 Americans were dead and a further 26,000 wounded or missing. This means 850 Americans died for every square mile of the island fortress. Only 216 Japanese troops were taken prisoner.

4. More gallantry was on display at Iwo Jima than any other battle before or since.

Iwo Jima saw more Medals of Honor awarded for actions there than any other single battle in American history. A total of 27 were awarded, 22 to Marines and five to Navy Corpsmen. In all of World War II, only 81 Marines and 57 sailors were awarded the medal.

To put it in a statistical perspective, 20% of all WWII Navy and Marine Corps Medals of Honor were earned at Iwo Jima.

5. U.S. Marines were Marines and nothing else on Iwo Jima.

The U.S. has seen significant problems with race relations in its history. And though the armed forces weren’t fully integrated until 1948, the U.S. military has always been on the forefront of racial and gender integration. The Marines at Iwo Jima came from every background.

While African Americans were still not allowed on frontline duty because of segregation, they piloted amphibious trucks full of White and Latino Marines to the beaches at Iwo Jima, moved ammunition and supplies to the front, buried the dead and fought off surprise attacks from Japanese defenders. Navajo Code Talkers were instrumental in taking the island. They were all Marines.

6. The iconic flag-raising became the symbol for all Marines who died in service.

Associated Press photographer Joe Rosenthal’s photo of Marines raising the flag on Iwo Jima’s Mount Suribachi is perhaps one of the best-known war photos ever taken. Raising the American flag at the island’s highest point sent a clear message to both the Marines below and the Japanese defenders. In the years that followed, the image took on a more important role.