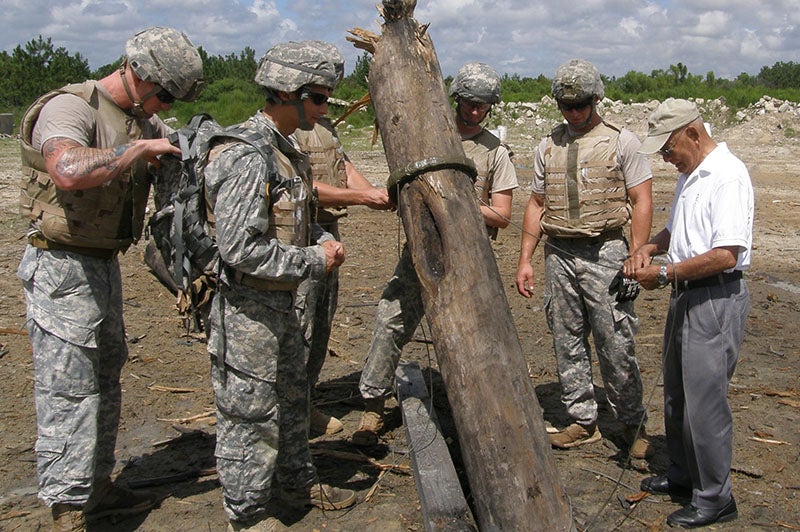 Ernest “Ernie” K. Tabata was born on Oahu, Hawaii in 1930. The son of Japanese immigrants, he began his military career at the age of 15 with the Hawaiian Territorial Guard. In 1949, he enlisted in the Army and completed combat engineer school at Fort Belvoir, Virginia.

In June 1950, Tabata was among the first American soldiers sent to the Korean War. During the war, he served with the 14th Combat Engineer Battalion, 1st Cavalry Division. Afterwards, he returned to Hawaii and was honorably discharged in 1952. However, his Army career didn’t end there.

In 1955, Tabata re-enlisted in the Army. He spent the next six years as a paratrooper in the 11th and 82nd Airborne Divisions. In 1961, he applied for Special Forces and made the cut. Following Special Forces training at Fort Bragg, Tabata was assigned to the 7th Special Forces Group (Airborne) and deployed to Southeast Asia.

As the Vietnam War heated up, Tabata volunteered for the clandestine mobile training team codenamed Operation White Star. Under the command of Green Beret legend Arthur “Bull” Simmons, Tabata and other Green Berets secretly trained the Royal Lao Army. In 1964, he was reassigned to the 5th Special Forces Group (Airborne)and deployed to Vietnam where he trained the Montagnards. The next year, he was reassigned again to the 1st Special Forces Group (Airborne) in Okinawa. There, he served as a team sergeant on a HALO Team.

While assigned to 5th SFG, Tabata and his detachment were sent to Korea. They trained the elite Korean White Horse Division and prepared them for their own deployment to Vietnam. In November 1965, Tabata was deployed to Vietnam himself. For his third combat tour, Tabata joined the elite Military Assistance Command, Vietnam Studies and Observation Group, better known as MACV-SOG.

After completing his tour with MACV-SOG, Tabata returned to the states in August 1970. He served with the 10th Special Forces Group (Airborne) and 12th Engineer Battalion. Following his promotion to Sgt. Major, Tabata served as the senior enlisted advisor to the assistant division commander, 8th Infantry Division, in Mainz, Germany. In 1978, he returned to Special Forces with 7th SFG(A). He retired from active duty in 1981 after 31 years of service.

In 2014, Tabata retired from the United States Army John F. Kennedy Special Warfare Center and School as an instructor. He tallied up a total of 59 years of honorable federal service. He passed away the next year. To recognize Tabata’s lifetime of service, the Special Forces Engineer Training Facility was named for him in 2018. “There is not a Combat Engineer who has not benefited from Ernie’s vast knowledge and skills,” said Donald Bennett, Jr., President of Special Forces Association Chapter 4-24. He remains one of the most well-known figures in the Special Forces community for his dedication, professionalism, and commitment to excellence.