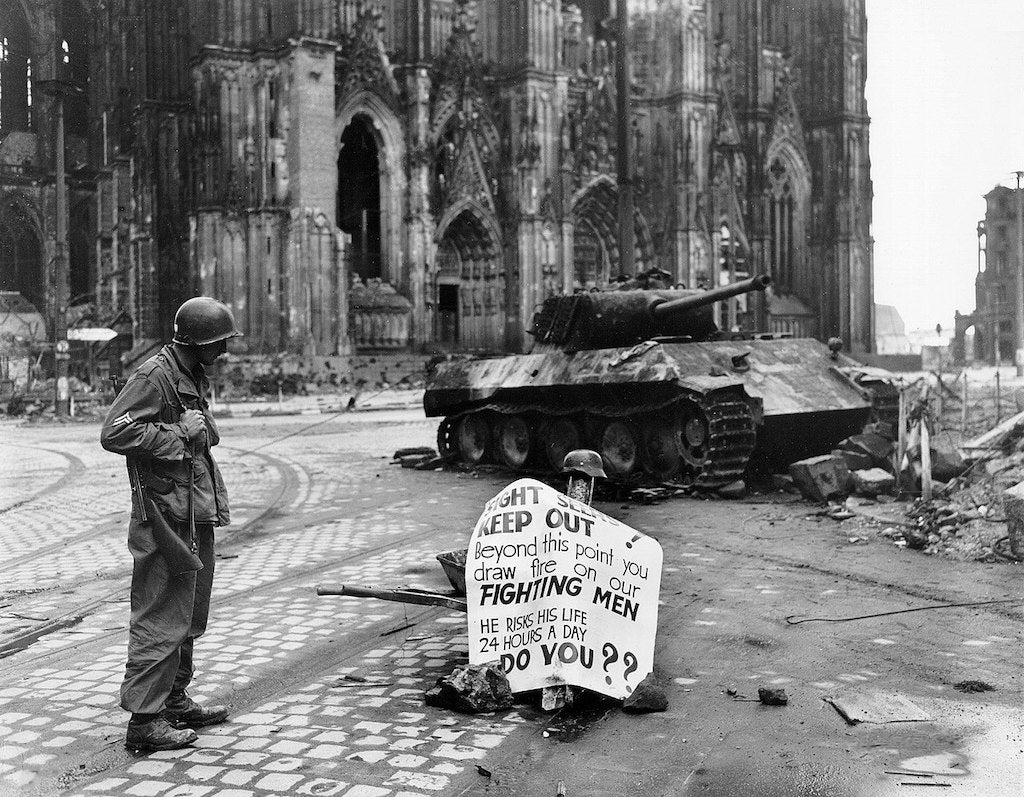 Cologne, Germany - Cpl. Luther E. Boger, Concord, N.C., skytrooper, reads a warning sign in the street. This street leads to the Rhine River and is under observation of the Germans who occupy a stronghold there. Cpl. Boger is with the 82nd Airborne Division. 4 April 1945. The German tank is burnt out and the torsion-bars have been destroyed by the immense heat of the fire.

Architecture plays a huge and important role in exhibiting the history of multiple cultures. Numerous wars have erupted on the face of the earth and have brought about the destruction of property. Buildings have turned to rubble, been leveled or left in ruins. In contrast, a handful of buildings have survived, probably due to sheer luck. Some of these buildings have been reconstructed, thus, giving us a view of their region’s religious, architectural and cultural identity.

The Cologne cathedral is recognized as one of the world’s biggest churches and is popular due to the golden shrine that holds the remnants of the three magi, popularly known as the three wise men. Its initial construction began in 1298 and went on till 1880. During World War II, the gothic architecturally styled church was first raided in 1940, where the allies conducted 262 separate air raids. In order to effectively attack Germany, the cathedral formed a locus for attacking the pilot bombers as it was an easily recognizable navigational landmark. The raid resulted in the death of 474 people, the destruction of 3300 homes, 5000 wounded people, and approximately 45,000 people were left homeless. After 14 bomb hits, the cathedral was heavily damaged, but its twin steeples remained towering.

When World War II ended in Europe, plans, funds and building materials for the church’s reconstruction and renovations were facilitated by the Men of the Monuments, Fine Arts and Archives Division, which was the officially designated entity tasked with the protection of cultural treasures. Later on, UNESCO declared the cologne cathedral a World Heritage Site, sufficiently protecting the historical site.

The first picture that pops up in your mind when you think of Rome is certainly the Colosseum or the Flavian amphitheater. It is one of Rome’s cultural identification marks and most prominent tourist attraction sites. It stands out profoundly due to its diverse architectural style as the ground floor columns exhibit the Tuscan style, while the third floor is accentuated by intricate details such as the insets and carvings of bronze and azurite from the Corinthian style. Culturally, the building represents the Roman empire’s power, majesty, and brutality. It hosted most of Rome’s cultural events, including mock sea battles, gladiator fights, drama plays and the presentation of exotic animals.

The Colosseum is not in its initial state as it was profoundly devastated by an earthquake that caused all its south side to collapse. It was also destroyed by the great fire of Rome that destroyed the amphitheater’s interior. After that, the building was not renovated. In war, enemies strive to destroy each other’s morale, and the Colosseum was an essential source for the Italian’s. However, during World War II, the Colosseum remained untouched as the allies aimed to avoid sensitive and ancient structures.

The Roman Baths of Somerset

Located in a famous spa town in Somerset, England, are the Roman baths, greatly accentuated by beautiful Georgian architecture. The roman baths were a destination exclusively for the wealthy elites during the 18th and 19th centuries. Certainly, one can wonder how intense roman culture found its way into England. In 43 CE, the Romans conquered and occupied England, where they constructed a temple and a bath as a dedication to the Celtic goddess of healing and sacred water, Sulis. The roman baths had a great religious significance in England, as some British tribes adopted the Roman religion.

Aside from that, the building is accentuated by some statues of the Roman generals and empires that ruled over Britain. The roman baths have stood the test of time as they have not been a victim of wars or combat. At the start of the 5th century, the Romans focused on preventing an invasion of Rome by the barbarians and, therefore, moved back, leaving Britain. As a result of the Roman withdrawal, the roman baths fell into disrepair and flooding. Currently, the Roman baths are listed by UNESCO as one of the World Heritage Sites due to their incredible insight into the ancient Roman culture.