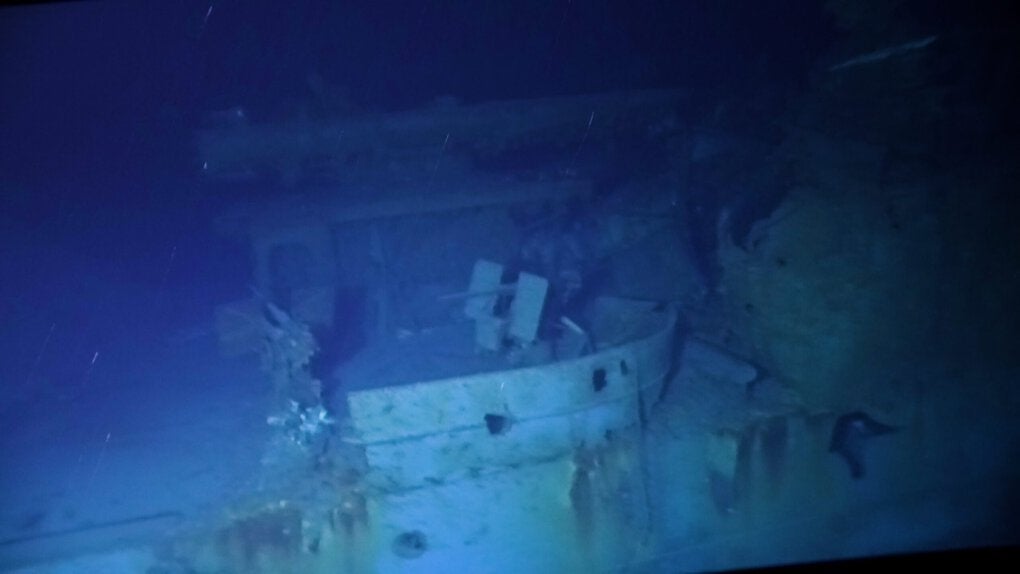 On October 25, 1944, the Japanese navy launched an all-out counterattack against the U.S. invasion of the Philippines. The Japanese were able to lure Admiral Halsey and the Third Fleet away from the Philippines by exposing the last of their aircraft carriers. With the departure of the Third Fleet, the small task force defending the island landings were left to face down the real Japanese attack.

The Japanese Center Force consisted of eleven destroyers, eight cruisers, and four battleships, one of which was the super battleship Yamato. With Halsey drawn away by the Japanese carriers, Task Unit 77.4.3 was all that stood in the way of the Japanese Navy destroying the invasion force. Known by their radio call-sign “Taffy 3”, the small U.S. naval element consisted of just six escort carriers, three destroyers, and four destroyer escorts. It would take an incredible amount of bravery and courage for the Americans to repel the huge Japanese offensive. Luckily, the crew of USS Johnston (DD-577) had both in spades.

Johnston was commanded by Cdr. Ernest E. Evans. On the day of the ship’s commissioning, Evans set the tone for his command. “This is going to be a fighting ship,” he fortuitously declared. “I intend to go in harm’s way, and anyone who doesn’t want to go along had better get off right now.” Seeing the mass of enemy ships bearing down on them, Evans ordered the Fletcher-class destroyer to charge.

Johnston‘s frontal assault was met with heavy Japanese gunfire. Multiple shells struck the ship, causing heavy damage and casualties. Evans himself was wounded, but ordered a second charge. The crew had expended all of their torpedoes on their first charge. The guns that were still fightable were low on ammo, but the brave sailors of USS Johnston charged again.

On the second attack run, Johnston shot a total of 30 more rounds into a much larger Japanese battleship. When the enemy ships turned their attention to the escort carrier USS Gambier Bay (CVE-73), Evans didn’t hesitate to issue new orders. “Commence firing on that cruiser,” he commanded. “Draw her fire on us and away form Gambier Bay.” Luckily for the escort carrier, the distraction worked. However, Johnston was not so lucky.

After two-and-a-half hours of courageous and ruthless fighting, USS Johnston sat dead in the water. With Japanese ships closing in, Evans gave the order to abandon ship at 0945 hours. Twenty-five minutes later, Johnston rolled over and began to sink. Only 141 sailors of the 327-man crew survived the battle; Evans was not one of them. He was posthumously awarded the Medal of Honor for his heroic command of the USS Johnston. Cdr. Evans became the first Native American in the U.S. Navy and one of only two destroyer captains during WWII to receive the honor.

The valiant head-on attacks by the crew of USS Johnston and the other sailors of Taffy 3 were able to route the Japanese attack. Their attacks were so fierce that the Japanese believed they were fighting a much larger force and decided to retreat.

75 years after she sunk, Johnston was discovered by the Vulcan Inc. research vessel Petrel. However, most of the wreck was too deep for their remotely operated submersible to reach. It was not until March 2021 that Caladan Oceanic was able to send a manned submersible down to Johnston‘s wreck. “Just completed the deepest wreck dive in history, to find the main wreckage of the destroyer USS Johnston,” tweeted Caladan Oceanic founder and submersible pilot Victor Vescovo. “We located the front 2/3 of the ship, upright and intact, at 6456 meters. Three of us across two dives surveyed the vessel and gave respects to her brave crew.” The Caladan Oceanic crew also laid a wreath in the vicinity of the battle site to honor the sailors who paid the ultimate sacrifice that day.