53 years ago, a vicious, unexpected attack showed Americans what kind of war they were really fighting in Vietnam - We Are The Mighty

53 years ago, a vicious, unexpected attack showed Americans what kind of war they were really fighting in Vietnam 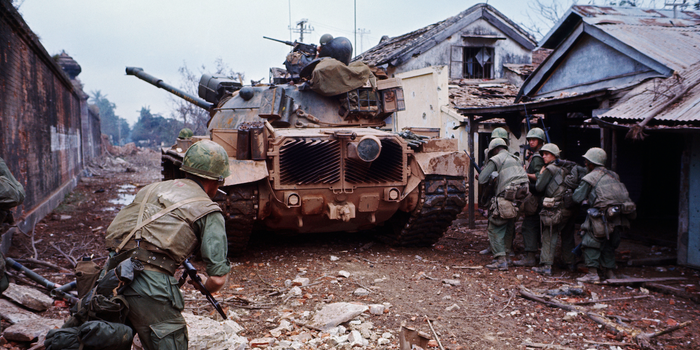 Many of the attacks were beaten back relatively quickly, some within hours, but the following days revealed that the fighting was not isolated.

Over 100 locations, including 36 of South Vietnam’s 44 provincial capitals, six of its largest cities, and dozens of towns, hamlets, and South Vietnamese Army (ARVN) and US bases faced a massive and well-coordinated attack.

The NVA and VC had launched their Tet Offensive, a brutal assault by some 84,000 soldiers and guerrillas across South Vietnam. They were told to “crack the sky” and “shake the earth” and that the offensive would be “the greatest battle ever fought in the history of our country.”

What ensued would change the course of the Vietnam War.

A plan to start an uprising

American military advisors had been on the ground in Vietnam for over a decade, but the country saw ever increasing fighting since the US directly intervened in 1965.

By 1968, at least 485,000 US troops were stationed in the country. The fighting on the ground was almost exclusively in the countryside, and bombing operations had expanded into Laos and Cambodia in an effort to destroy the Ho Chi Minh Trail, the main supply line for communist forces.

Contrary to statements made by President Lyndon B. Johnson and the overall US commander in Vietnam, Army Gen. William Westmoreland, there was no sign of victory in sight.

The war had entered a stalemate, and the leaders of North Vietnam, upset by the lack of progress, devised a plan that they believed would give them the decisive victory necessary to unify Vietnam under communism.

They would take the fight directly to South Vietnam’s centers of power — the cities.

The objective was to take control of the major cities, broadcast messages of revolution, and start a general uprising across the country, overwhelming American and ARVN forces and leaving the US with no choice but to withdraw.

The offensive took place during Tet, a holiday that was traditionally, but unofficially, seen as a ceasefire period, allowing ARVN soldiers to return home.

In the months before the offensive, the NVA and VC smuggled thousands of men, weapons, and tons of supplies down the Ho Chi Minh trail and into South Vietnam’s cities.

By December, US and ARVN commanders knew something was coming. They noticed the massive increase in activity along the Ho Chi Minh trail, and captured reports showed plans for attacking cities. They also intercepted a recorded message calling on locals to rise up.

Westmoreland believed these were diversions and that the true target was Khe Sanh, a large military base just a few miles from the demilitarized zone between North and South Vietnam.

Worried that the US could suffer a defeat like France’s disastrous loss at Dien Bien Phu 14 years earlier, Westmoreland ordered reinforcements to Khe Sanh and put its 6,000-strong Marine garrison on alert.

Believing this to be the main attack, the US threw a massive amount of firepower into the fight, dropping close to 100,000 tons of bombs on NVA positions. Half of the US Army’s mobile reserve was also sent into the area.

But Khe Sanh was the diversion.

A little more than a week after the fighting at Khe Sanh started, the true targets came under attack. Saigon, South Vietnam’s capital, was the biggest.

Shortly after midnight, the presidential palace came under assault, as did the airport, the city’s biggest radio station, and multiple bases, including Westmoreland’s own headquarters.

Most shocking, 19 VC commandos breached the US Embassy, engaging US troops in a six-hour long firefight before being killed or captured.

But things fell apart for the VC and NVA in Saigon. US and ARVN forces inflicted massive casualties, and operators at the radio station prevented the call for an uprising from going out.

By early February, the attackers were on the defensive, and the fighting was over by early March.