'Quiet professionals': These are the legendary Vietnam War marksmen every Marine scout sniper trains to be - We Are The Mighty

‘Quiet professionals’: These are the legendary Vietnam War marksmen every Marine scout sniper trains to be 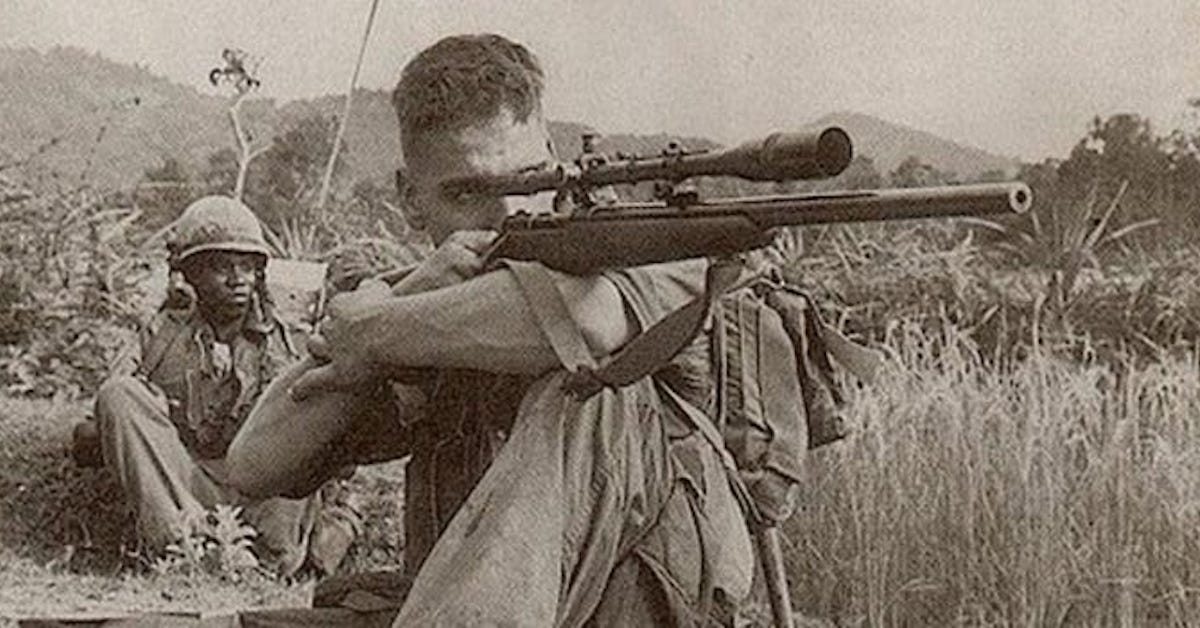 Marine Corps snipers struck fear in the hearts of their enemies in the jungles of Vietnam. The exploits of three sharpshooters, in particular, are legendary.

Charles “Chuck” Mawhinney, Eric England, and Carlos Hathcock had almost 300 confirmed kills combined and even more unconfirmed. They were masters of their craft, and their skills in battle, as well as their silent professionalism and humility, made these men examples for the Marine snipers that followed.

“The Marines who go forward and work to put 120% into it and let their accolades speak for themselves are the guys that we encourage [Marine snipers] to emulate,” Staff Sgt. Joshua Coulter, a Marine Corps Scout Sniper instructor, recently told Insider.

As skilled marksmen capable of putting precision fire down range at a distance, snipers excel at providing overwatch and gathering intelligence, eliminating enemy officers, and demoralizing opposing forces, among other things.

In many conflicts throughout US history, Marine Corps snipers have proven to be valuable assets on the battlefield. But when the fighting finished, the Corps time and time again failed to build the kind of lasting programs needed to preserve the skills. That finally changed with the Vietnam War.

“Vietnam was the foundation for our modern program,” Coulter said. He explained that the remarkable capabilities demonstrated by Marines like Mawhinney, England, and Hathcock during the conflict highlighted the value of  snipers in a very visible way.

“The only reason there is still a sniper program today is the guys who came before us, the quiet professionals who worked their assess off, went down range, and came home,” Coulter said.

They didn’t try to tack their names into the legends of the Corps, but by giving it their all, these snipers left their mark on history.

In Vietnam, Hathcock had 93 confirmed enemy kills and several hundred unconfirmed. He also set the record for the longest combat kill shot in 1967 at 2,500 yards — a distance of about 1.4 miles. The record held until the early 2000s.

The Arkansas native deployed to Vietnam in 1966 as a military policeman, but because he had previously distinguished himself as a marksman, Hathcock was recruited by Edward James Land, another talented Marine sharpshooter who had been tasked with building a sniper program from scratch to counter the enemy’s irregular warfare tactics.

As a sniper, Hathcock inflicted such tremendous pain on enemy forces that the North Vietnamese army placed a $30,000 bounty on his head, putting him in the crosshairs of elite enemy snipers.

One of his most memorable battles in Vietnam was with a notorious sniper nicknamed “Cobra” who was sent to kill him. The enemy sharpshooter had been purposefully killing Marines near Hathcock’s base of operations to draw him out. It worked, but not the way Cobra had intended.

As the two expert snipers stalked one another, Cobra made a mistake. He moved into a position facing the sun, causing his scope to reflect the light and give away his position. Hathcock fired, shooting clean through the enemy’s scope and killing him.

The nature of the shot suggested that had Hathcock not seen the glare or been faster than Cobra on the trigger, his enemy would have shot him instead.

Among Hathcock’s famous kills was also a woman nicknamed “Apache” who tortured captured Marines and a North Vietnamese general. He pulled off the latter on a secret one-man mission deep into enemy territory.

For many years, Hathcock was believed to have the most confirmed kills of any Marine Corps sniper. That never mattered to him though, according to Charles Henderson’s book, “Marine Sniper: 93 Confirmed Kills.”

“You can take those numbers and give ’em to someone who gives a damn about ’em,” Hathcock is said to have told a fellow Marine during a discussion about his kills.

“I like shooting, and I love hunting. But I never did enjoy killing anybody,” he said. “It’s my job. If I don’t get those bastards, then they’re gonna kill a lot of these kids dressed up like Marines. That’s the way I look at it.”

Hathcock left Vietnam in 1969 after suffering severe burns while rescuing Marines from a fiery vehicle that struck a mine.

Although his injuries prevented him from serving as he once had, he remained active in the sniper community, providing instruction even as his health failed later in life.

Hathcock died in 1999 after a long and painful battle with multiple sclerosis, but his memory lives on. Though he does not actually hold the record for the most confirmed kills as previously thought, Hathcock is widely regarded as one of the finest snipers in the history of the Corps.

England is one of two Marine Corps snipers who had more confirmed kills than Hathcock during the Vietnam War, though not a lot is known about his service.

Before the war, he had proven himself to be an excellent marksman in shooting competitions. Once in Vietnam as a sniper with the 3rd Marine Division, he continued to excel. In a period of just seven months before he had to be medically evacuated, he had 98 confirmed kills, with possibly hundreds more unconfirmed.

The Georgia native never really talked about his service or his kills, according to a 2011 report from the Union County Historical Society. His record, as was the case with Hathcock, was relayed by Marine Corps officers familiar with his accomplishments on the field of battle.

England opened up a little about his experiences during an interview with the Marine Corps in 2017, just one year before he died.

“About Vietnam, well, like all wars, it ain’t no good feeling, especially some of the jobs you have,” England said, explaining that shooting at human beings in war is different from shooting at targets in competition, though snipers can’t focus on that.

“When you go to get that one shot off, you have to put yourself in another world,” he said. “You try to put yourself in a little bubble. You cut the world out, and you just concentrate on those things you got to do to get a good shot off because if you don’t, you could be dead.”

He told the Marine Corps that he did not not brag about his kills because he was not seeking glory. He did, however, say that he considered himself better than the average Marine because a good shot makes a better Marine and he could shoot better than most.

Despite his legendary status, England is not very well known outside the US military sniper community, but Hathcock once said that “Eric is a great man, a great shooter, and a great Marine.”

Mawhinney spent almost a year and a half in Vietnam, but when he returned home to Oregon in 1969, he kept the details of his service a secret. No one outside a small circle of Marines he served with knew the truth: he was the deadliest sniper in Marine Corps history.

Ward’s book triggered an investigation into Marine Corps records, and it was found that the number he reported was incorrect. It turns out that Mawhinney actually had 103 confirmed kills. He also had another 216 “probable” kills.

With the release of Ward’s “Dear Mom: A Sniper’s Vietnam” and the end of Mawhinney’s quiet life of anonymity, this outstanding sharpshooter came out of the shadows and shared parts of his story publicly.

In one particularly intense engagement, Mawhinney put 16 bullets in 16 enemy troops in just thirty seconds, and he did it in the dark.

“I got 16 rounds off that night as fast as I could fire the weapon,” Mawhinney said in an interview for a documentary on Marine scout snipers. “Every one of them were headshots, dead center. I could see the bodies floating down the river.”

Vietnam, as it was for many, was hell for Mawhinney, but he extended his tour of duty because he knew he had the abilities to keep his fellow Marines alive.

One of the things that haunted Mawhinney after Vietnam was an enemy soldier that got away after an armorer had made adjustments to his rifle. He fired off multiple shots. All of them missed.

“It’s one of the few things that bother me about Vietnam,” he previously told The Los Angeles Times. “I can’t help thinking about how many people that he may have killed later, how many of my friends, how many Marines.”

Mawhinney left Vietnam after being diagnosed with combat fatigue. He is still alive, and his M40 rifle is on display in the National Museum of the Marine Corps.

There is a lot that modern-day Marine scout snipers can learn from legends like Mawhinney, England, and Hathcock. For Staff Sgt. Coulter, who instructs future Marine snipers, what stood out as most impressive was their attention to detail down to the smallest level.

“Their attention to detail was unparalleled,” he said.

“Those guys back in the day were handloading their own rounds,” Coulter continued. “They went to great depths to understand the equipment they used, the ammo they used, the effects of their environment.”

“They understood you are naturally at a disadvantage walking into someone’s backyard,” he said, explaining that they thought carefully about how they camouflaged themselves, the routes they took, the positions they held, and so on.

“They went into such nitty-gritty detail, and that was kind of the definition of success for them,” he told Insider.

As part of their training, Marine Corps scout snipers are required to take time to study their history and the outstanding snipers who came before them. It’s a reminder, Coulter explained, that “the only thing that kept our program alive was performance.”

During the Vietnam War, snipers proved their worth. It is said that for every enemy killed, the average infantryman expended 50,000 bullets. For snipers, with their “one shot, one kill” approach, it was an average of 1.3 rounds per kill.

And snipers continue to make a difference today.