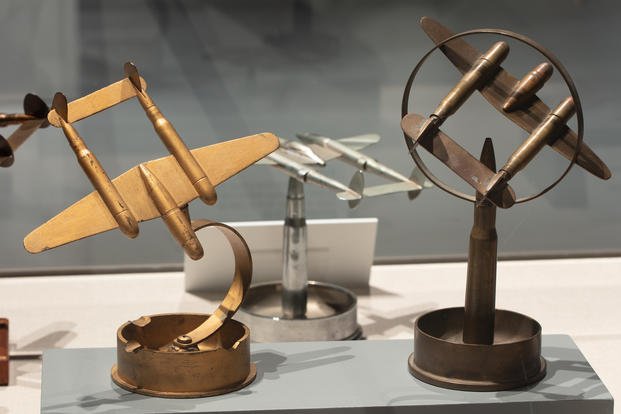 SOLDIER | ARTIST: Trench Art in World War II is on display now through Jan. 2, 2022, in the museum’s Senator John Alario Jr. Special Exhibition Hall, giving visitors a chance to plan a safe trip after we’ve all had a chance at getting a COVID-19 vaccination.Advertisement

The museum opened in 1991, and curators have spent much of the last two decades systematically collecting the more than 150 pieces featured in the show. Most were donated by the original artists or their families.

Time can move slowly between battles, and soldiers have been occupying themselves with creative projects since the beginning of warfare. Trench art came to describe the handiwork during World War I, and the term has survived even though soldiers had far more tools and opportunities during World War II.

The museum has shared some photos from the exhibit, but you’ll have to visit to see the entire collection up close.Advertisement

The United States managed to get an enormous amount of support gear into the fields, and soldiers suddenly had access to portable machine shops in almost all theaters of war. More powerful tools led to far more elaborate art.

Plexiglas was a revolutionary new material that transformed design, repair and maintenance during the era. Here’s an example of a knife repaired with Plexiglas washers. Most American military knives of the era were created with stacked leather washers. Take those to the South Pacific’s heat and humidity, and you’ve got the perfect recipe for handle rot.

Spent bullets and shell casings were plentiful and sturdy, so these leftovers became a popular medium for trench artists. The P-38 Lightning featured twin booms that lent themselves to bullet art. Abstract representations such as this one are immediately identifiable as the American plane.

Something else that soldiers did with their downtime was enjoy the free cigarettes sent by U.S. tobacco companies, and these sculptures are designed to be used as ashtrays.

Vases made from shell casings were particularly popular during World War I, and the practice continued into World War II. This vase was created in 1943 from a 105mm shell casing.

This incredibly ambitious project was undertaken by POW 1st Lt. Clair Cline, 448th Bombardment Group, 714th Bombardment Squadron, while he was imprisoned in Germany’s Stalag Luft I during 1944. Cline had serious woodworking skill and created this violin with makeshift tools such as broken glass and table knives.

He scavenged wood bed slats, table legs and aid cartons for materials and put the whole thing together with glue scraped from the bottom of German mess-hall tables. He finished the instrument in time to perform a short Christmas concert for his barracks.

Technician 3rd Grade John D. Sweitzer of the 551st Ordnance Heavy Maintenance Company oversaw a detail of German POWs at the 6960th Ordnance Depot at war’s end. The Germans thought Sweitzer needed to look more like a man in charge, so they made this elaborate swagger stick and gifted it to him.

Sweitzer, who obviously inspired respect even from enemy troops, kept the piece and later donated it to the museum.

The rest of the exhibit includes frames, cigarette cases, airplane models and even a vessel for communion wafers. If you’re looking for insight into what troops did before video games and social media, you’ve got almost a year to visit New Orleans and see for yourself.