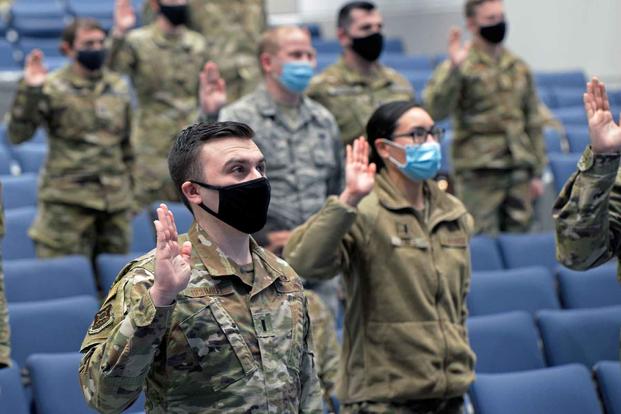 Those questionable offerings were among about 400 suggestions on what to call members of the military’s newest branch, submitted by Air Force and Space Force members before “Guardians” was chosen in December, according to a list provided to Military.com on Friday.

Someone even suggested: “Nothing, because you wouldn’t hear it in space anyway.”

Last year, Gen. John “Jay” Raymond, chief of space operations for the Space Force, said the service was sifting through nearly 700 crowdsourced names of what to call its space professionals. In December, then-Vice President Mike Pence made the official announcement that Space Force members would be called Guardians.

“Soldiers, sailors, airmen, Marines and Guardians will be defending our nation for generations to come,” Pence said during a ceremony the day before the Space Force’s 1st birthday.

Space enthusiasts and military members were quick to point out that “Guardians” evokes the Marvel Comics’ “Guardians of the Galaxy” film franchise about a motley crew of superheroes in space.

“Guardians of the Galaxy” was also a submission, according to the service’s list.

In 2016, the Air Force unveiled its list of rejected names for its new stealth B-21 bomber, which was ultimately named Raider after the Doolittle Raiders, the World War II-era bomb crews who launched morale-boosting strikes on Tokyo after the Japanese attack at Pearl Harbor.

Check out the full list of rejected Space Force names below: