Ebony Anglers reel in success - We Are The Mighty 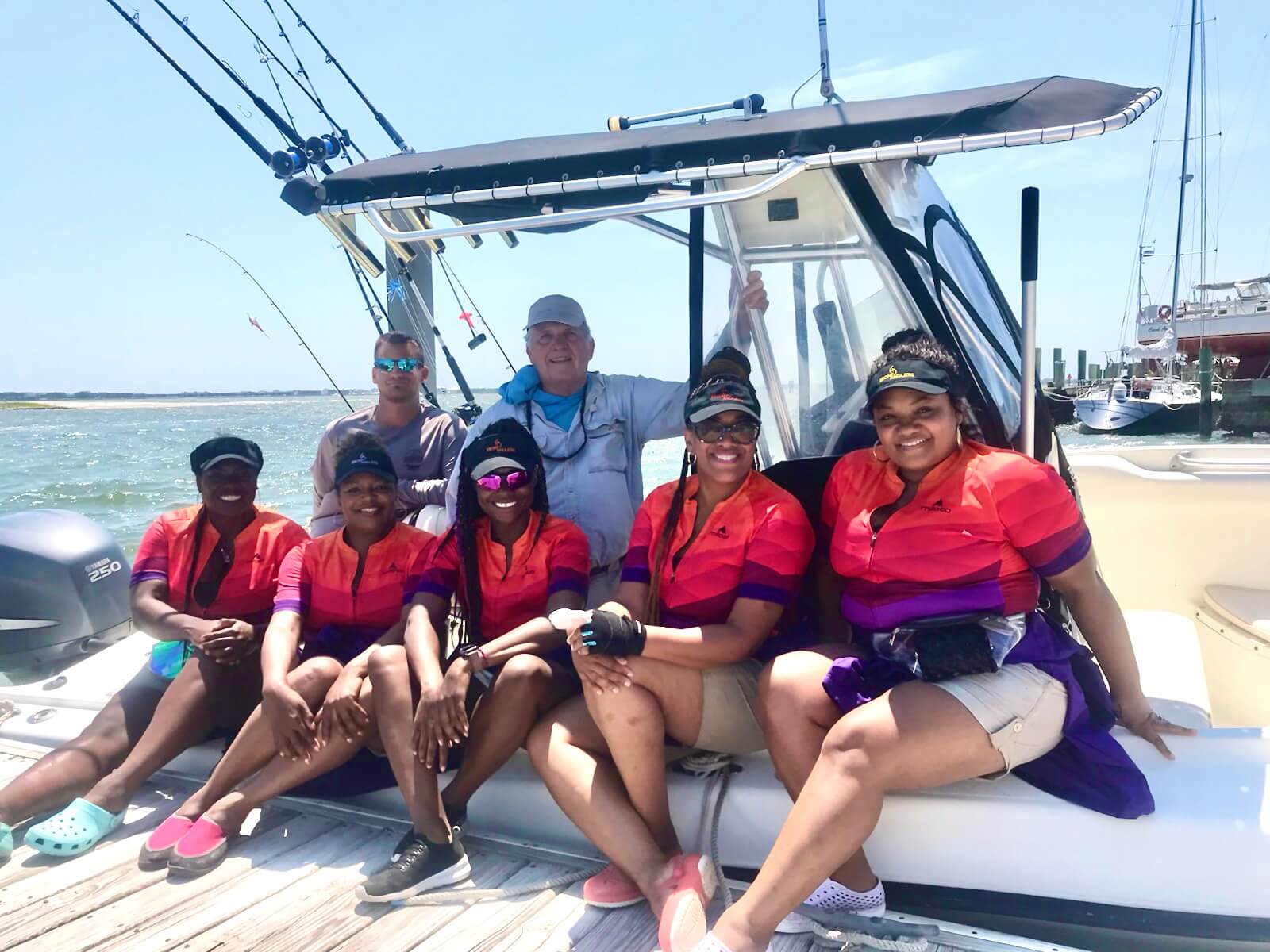 The Ebony Anglers, a group of five African-American women, are turning heads and reeling in success in the world of competitive deep-sea fishing. Based in North Carolina, they are fulfilling their passions out on the water and making inroads in the predominately male and Caucasian world of angling.

The minute you meet the group’s members, Gia Peebles, Lesleigh Mausi, Glenda Turner, Tiana Davis and Bobbiette Palmer, you instantly feel the comradery and affection they have for one another. All five are small business owners, friends, and mothers — collectively they have 19 children and step-children among them.

The group started in the summer of 2020 and was the brain child of Peebles, who is called “T-Cap,” short for team captain. While watching competitors at the Big Rock Fishing Tournament, Peebles couldn’t shake the idea that she could do this.

“These people were coming off their boats with huge fish and they looked like they were having fun and I thought, ‘okay I can do that.’ Okay, who is crazy enough to do this with me?” she said.

Peebles first called Mausi, a long-time friend, about collaborating. Mausi’s father was a professional angler who had recently passed away, and the thought of joining a team gave her goose bumps. Right before the group’s first big tournament, Mausi cut off the tip of her pointer finger, and now she’s affectionately known as the “Pointer Sister,” the group said over laughs.

Next came Davis, who is married to a disabled Navy veteran. She had fishing experience and is called “Princess Tiana.” Turner, who is the mother of three children — including an Army veteran — and has eight grandkids, came to the team next. She is affectionately known as the “Regulator” for her stern but loving grandmotherly persona.

When Peebles called Palmer to be the fifth and last person to round out the team, everyone initially laughed as her motion sickness is legendary among the group. When the laughter subsided and Palmer realized this was a serious request, she agreed, deciding that she wanted to get out of isolation during the pandemic and try something new.

On their first outing, Palmer “chummed the waters” with sea sickness and requested space to curl up and get into the fetal position on the boat. Recounting that story, the ladies all crack up. Peebles said that Palmer’s determination is legendary.

“She said, ‘As long as I can get in the fetal position, I can come back’ and she comes back every time . . . and she ‘thugs’ it out, every time,” Peebles said.

As you can guess, Palmer’s now referred to as “Thug It Out,” the group said through laughter.

More than just laughter, nicknames and comradery, the group is achieving professional success and building something broader. In July 2020, the Ebony Anglers took first place in the Spanish Mackerel & Dolphin Tournament in Morehead City, North Carolina after reeling in a 48 lb. king mackerel.

“It was beyond exciting and that’s just not a good enough word to describe the moment when we pulled it on to the boat,” Davis said. Pulling into the dock, the group learned that they were to receive a citation from North Carolina Wildlife Resources Commission.

“‘Ugh! Y’all, they are giving us a citation!’ I said, ‘We need to protect our fish!’” Mausi recalled.

She hurriedly attempted to get the fish and crew off the dock and back on the boat out of sight of state officials. Only then, did she learn that a citation recognizes anglers for their outstanding recreational catches. “We were lucky enough to receive one,” Mausi said chuckling.

Out on the waters, the group feels that they are both building something for themselves and serving as role models for others. Mausi says they do get interesting stares from other anglers but she marvels that it is often a conversation opener among people.

“I definitely feel like we are trail blazers in some respects,” Peebles said, agreeing. “Not necessarily that we are the first African American females to fish. . . we are bringing a new face to the industry of angling. While we haven’t been met with resistance, we’ve been met with a series of responses, emotion and curiosity because it is something different that people aren’t accustom to seeing.”

“It’s a lifestyle we want to expose children to,” Palmer said. For her, it’s a great way to teach life and survival skills. “You can use a compass. You can use radar. You can fish your own food, and there is power in that,” she said.

When asked why the story of the Ebony Anglers should matter to young women, the group agrees that their story shows that anything is possible.

“I want girls to understand that no matter what, you can find the strength in you to do something as interesting and as different as deep-sea angling and competitive fishing, where you look different and you also are unexpected,” Mausi said. “That’s a good place to step in. It takes a certain kind of strength and fortitude to blaze trails and to do something different and have the confidence to stand in that space and be excellent at it.”

For more information about the Ebony Anglers or their non-profits, visit www.ebonyanglers.com.