Brave little heart: One Air Force family navigates the unthinkable - We Are The Mighty 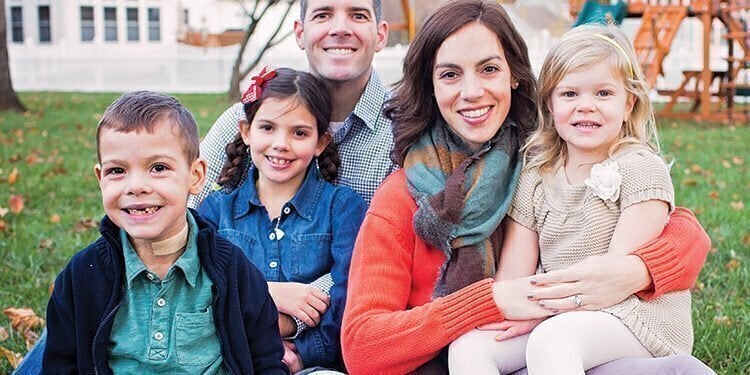 On the surface, the Benscoters are an ordinary military family— dad, Joe, is a C-17 pilot, married to college sweetheart, Danielle, with three children, Sophia, 9, Tyler, 8, and Emily, 4. But dig a little further and you will find that there is a superhero in the family.

Joe and Danielle Benscoter met at Auburn University and were married shortly after he was commissioned into the Air Force in 2007.

When Danielle was pregnant with their second child, Tyler, the couple learned that their unborn son suffered from a rare, serious heart defect called hypoplastic left heart syndrome (HLHS).

“He essentially was born with half a heart since the left side of his heart was underdeveloped and unable to function properly,” she said. “Without surgical intervention, children born with HLHS will not survive longer than a couple of weeks.”

When Tyler was born, the Benscoters chose to take the surgical route and Tyler had his first surgery at 3 days old.

“His first open heart surgery, called the Norwood procedure, essentially changed his blood flow enough to allow him to grow larger prior to his second and third stage surgeries,” Benscoter said. “I was nervous, scared, anxious … all of the typical emotions a mother would have when their child is going into surgery. However, there was no second guessing on whether this was the right path for Tyler. I felt as if it were the only path for him and that gave me peace.”

The Norwood procedure was just the beginning of Tyler’s journey.

“He had his second stage surgery, the Glenn procedure, when he was 3 months old,” she said. “He had the Fontan procedure at 2 years old. These last two open heart surgeries allowed his blood to passively flow into the lungs instead of into the right side of his heart, get oxygenated, and get pumped out to the body by the right side of his heart, which is typically the job of the left side of the heart.”

Some children have survived into adulthood after Fontan physiology, not needing any other procedures after the third open heart surgery.

“Unfortunately, Tyler wasn’t able to tolerate the Fontan physiology for nearly as long as we had hoped he would,” Benscoter said.

“I brought him to CHOP and they confirmed that his body was no longer able to sustain his Fontan physiology,” she said. “His heart failure was so severe and came on so rapidly that he was referred to the heart transplant team and was listed for transplant within two months of his symptoms occurring. Unfortunately, his health continued to rapidly decline and his team was afraid he would die if he did not have a Ventricular Assist Device (VAD) implanted. The VAD his cardiac surgeon implanted during Tyler’s fourth open heart surgery was never put in a child as small as Tyler. Thankfully, it worked wonderfully in Tyler and we were able to have him live at home for approximately a year and a half while he waited on the transplant list for his new heart.”

“He did wonderfully for almost two years with his new heart before he began exhibiting signs and symptoms of heart failure in October 2019,” Benscoter said. “At that time, Tyler was diagnosed with rejection of his heart transplant.  His immune system began attacking his heart, causing his transplanted heart to fail.”

During this time, Joe transitioned from active duty to the Reserve so the family could avoid another PCS and keep Tyler with his cardiac team at CHOP.

“Our military family has been incredible throughout our journey with Tyler,” she said. “Joe has had several commanders who have done everything in their power to coordinate assignments that put Tyler near top-ranked pediatric cardiology care. We have had so much love and support from our Air Force friends who have cooked meals, babysat our daughters, and held fundraisers for us. The Dover Spouses’ Club has even donated money two years in a row to the Philadelphia chapter of Mended Little Hearts, a non-profit organization benefiting cardiac families at the Children’s Hospital of Philadelphia.”

Today, Tyler’s heart transplant team at CHOP is executing a very aggressive plan to help him fight off rejection with the hope that he may one day be eligible to be re-listed for another heart transplant.

“Joe and I feel so lucky to have Tyler as our son,” Benscoter said. “His existence has provided so much perspective in our lives. We have watched other parents lose their children to congenital heart defects and we realize that we may face that reality. When you live in that kind of mindset—knowing that your child may not outlive you—it forces you to really evaluate what matters.”

February is American Heart Month. It was established in 1964 by President Lyndon B. Johnson, who urged “the people of the United States to give heed to the nationwide problem of the heart and blood-vessel diseases, and to support the programs required to bring about its solution.”