These military spouses inspired a national effort for underserved youth 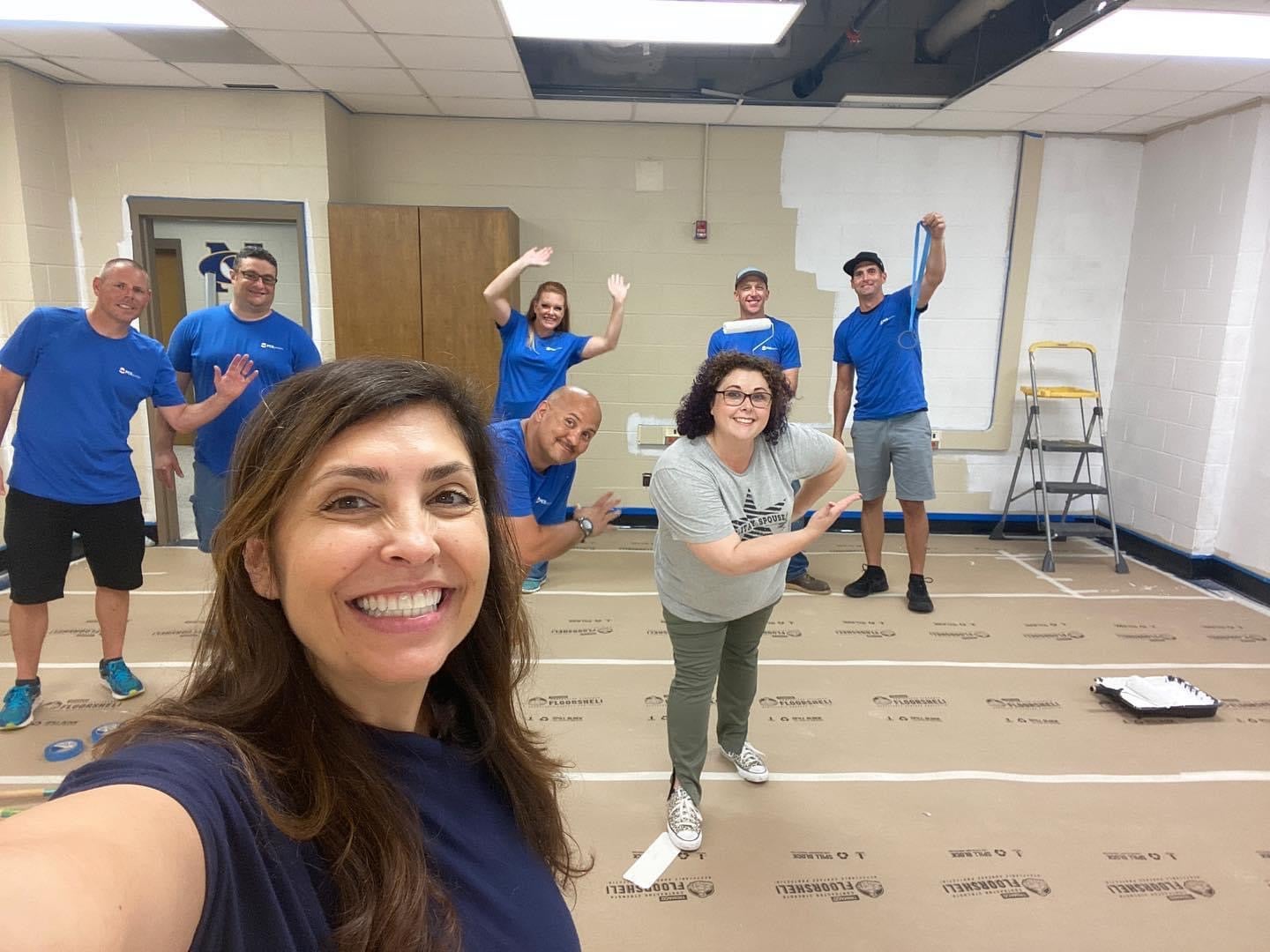 When four military spouses heard about the North Charleston High School principal working nights at Walmart to financially support students in need, they were inspired into action.

The Inspire Up Foundation’s visionary statement is, “One community, One mission” and while the organization primarily serves the military and first responder communities, their programming aims to also stand in the gap for all of those in need. When its founders heard about the school and its need, they knew they wanted to do something.

The South Carolina Department of Education estimates that almost 90% of North Charleston High School students were living in poverty during the 2017-2018 school year. With the COVID-19 pandemic causing nationwide layoffs, the already struggling community took an even bigger hit. The principal had donated over $2,500 of his Walmart earnings when the news of his honorable deed went viral.

“Watching his Today Show interview left us all in tears so on a whim I reached out to Principal Henry Darby to tell him what an inspiration he was to all of us,” Samantha Gomolka, COO of the Inspire Up Foundation and Army spouse said. “Then, the four of us got together to start thinking about how we could support his efforts and do even more for those kids.”

“Statistics have shown that impoverished youth tend to receive the majority of their nutrition on the days they attend school. Creating a pantry that allows them to bring food home so they don’t go hungry just made sense. The data also shows youth often skip school because they don’t have clean clothes and they’re ashamed which is where the laundry room came in,” Manfre explained.

The team didn’t just want there to be food in the school pantry, Bilodeau said. “The vision we had included essentials like toiletries, school supplies and even undergarment items,” she explained. “We wanted it to be an environment that felt like a fun store that they could easily get what they needed from.”

Big ideas aside, the nonprofit needed the financial support to make the dream a reality for the students at North Charleston High School.

Reed not only runs the Inspire Up Foundation with her fellow founders as its CEO but also owns and produces the television series, Moving With The Military. The show travels all over the country providing home makeovers for military families and veterans, filming it all for TV. Despite the pantry and laundry room idea being attached to a school filled with nonmilitary youth, she approached MWTM title sponsor Caliber Home Loans with the project.

“The idea was to demonstrate the military community’s commitment to serve and investing right here at home in America,” Reed explained. “For this makeover, the goal was to have every volunteer be active duty, veteran or a military spouse. We wanted to show this school and the community that they matter. Caliber said yes without even hesitating!”

Caliber’s National Director of Community Engagement for Military Lending, Brittany Boccher, said that saying yes was easy. “What better way to demonstrate the company’s commitment to investing in the community than by doing this? As an Air Force veteran’s wife, I can attest to the importance of our civilian communities. Without family and friends nearby it was them who carried us through with the support we needed to feel at home,” she explained.

Also joining in to financially support the project dubbed “Operation Community Pantry” was PCSgrades, whose founder Todd Ernst is an Air Force veteran. Community Outreach Manager for the company, Stacey Benson, is a Charleston resident and Coast Guard spouse. During the partial government shutdown, she was one of many Coastie spouses who created pantries to feed families when their service members went without pay.

As for the laundry room plans, the team decided to approach Lowe’s Home Improvement which is well-known for being a military friendly company. Lowe’s immediately committed to donating three washers and dryers for the school. Gomolka shared through tears how the support for the project was emotionally overwhelming at times. “Seeing this much kindness was a reminder of how much good there really is in the world,” she explained.

Manfre said she reached out to USCG Base Charleston Command Master Chief William P. Klein. With his support and collective efforts of the USCG Low Country Chief Petty Officers Association, USCG Enlisted Association and airmen from Joint Base Charleston, the dedicated volunteers were all in.

The local Starbucks district donated coffee every day of the week-long project and on the day of the big reveal, USO South Carolina showed up with their mobile USO bus. They were all in on taking care of the military members and spouses while they put the finishing touches on the makeover. “They are such a strong advocate and much needed support for our community. Watching them show up for us in this way was incredible,” said Bilodeau.

At 11am Eastern on June 28, 2021, Principal Darby was led by a parade of waving American flags held by uniformed military members, Caliber Home Loans employees, Lowe’s representatives, teachers and some very excited students to see his school’s new pantry and laundry makeover. Reed said the tears were flowing when he saw it all for the first time and he kept expressing his deep gratitude for the military community’s efforts.

It was a good day.

“Let this be the blueprint for the entire nation. This pantry project wasn’t about one person, organization or group – it was all of us,” Manfre said. “There are so many schools across the country who’s students are going hungry and we shouldn’t be okay with it. The old saying of ‘it takes a village to raise a child’ couldn’t be more true. Now more than ever, we need each other to not just survive but actually thrive. We are the change.”

To watch the full makeover, follow Moving With The Military on Facebook and Instagram. The North Charleston High School makeover episode will make its debut in September through social media, Roku, Farm and Ranch TV and it’s one you definitely wont want to miss. You can also learn more about the Inspire Up Foundation and their mission by clicking here.