These military spouses ran for political office in 2020, and won - We Are The Mighty

These military spouses ran for political office in 2020, and won 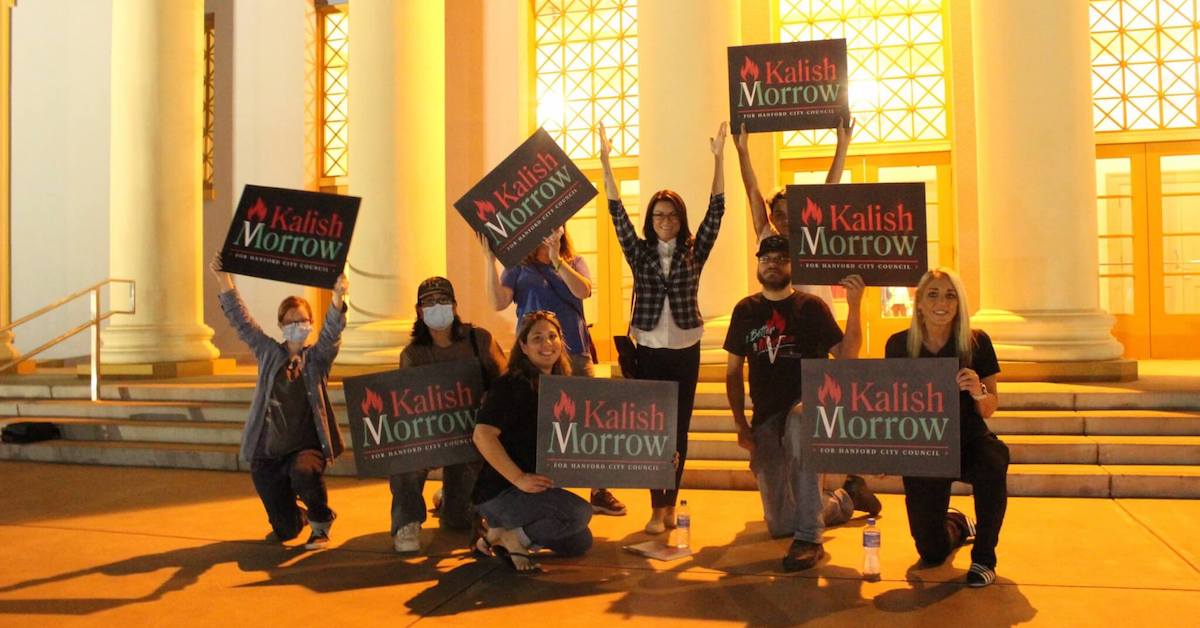 Three military spouses recently ran for political office in their local communities and won their campaigns in the most recent November election.

Kalish Morrow, a Navy spouse currently stationed at Naval Air Station Lemoore, was elected as the City Councilperson for Hanford, California. Although Morrow was not always involved in politics, her work as a small business owner in Hanford motivated her.

“As a business owner, I got involved with our Main Street program and quickly started seeing the issues our small businesses faced with onerous red tape and high fees,” she said.

However, Morrow didn’t win that election. She ran again in 2020, with support from the Libertarian Party.

“My campaign had a huge focus on the voice of the people … and rallied community involvement through leading by example,” Morrow said.

She spent her campaign doing things like organizing park cleanups, building with Habitat for Humanity, and driving donated items out to Fresno for victims of the recent wildfires over the summer.

Although her background as a military spouse did not have a direct effect on her decision to run for political office, Morrow does believe her experience with the military lifestyle will impact the way she leads her constituents.

“Over the years I’ve had to learn how to compartmentalize and keep moving forward when things get difficult,” Morrow said. “I’ll be stepping into a big role right in the middle of COVID and when the effects of the shutdowns begin to take its toll on the economy. My biggest job … will be to make sure the city keeps providing important services to its people while not placing any additional financial burden [on the people].”

Morrow learned a lot during her two campaigns in 2016 and 2020, but her biggest takeaway is that votes are about the people.

“Votes are earned one person at a time,” she said. “People do not like their votes are taken for granted so they appreciate you taking the time and putting in the painstaking effort of going and meeting with them to show you truly care about your community.”

For military spouses who are also interested in getting involved in politics, Morrow has a few pieces of advice.

“Above all else, you must knock on doors. It sounds tedious … but … people appreciate your willingness to take the time and meet with them personally,” she said. “[Also], having an organized campaign with a great campaign manager. … Your team is precious and vital to a successful campaign.”

Morrow also suggests military spouses get involved in their city councils if they are interested in making a change in the community, even if you will only be there for a short time. She recommends going to the city council and county supervisor’s meetings, or join a citizen’s advisory board. You can also attend local meetings.

She also notes that getting involved in the local community helps military spouses meet other like-minded people they might not otherwise have the chance to meet if they stay in their little military bubble. Those connections can become valuable tools if you’re interested in getting more involved in politics in the future as an elected official.

Allison Russo and Erin Pare, both military spouses, also won elections in their local communities on opposite sides of the political aisle.

Russo, a military spouse of a combat veteran, was re-elected as the state representative for the 24th District in Ohio. She first ran for the position in 2018 and flipped the seat from Republican to Democrat in that election.

“My plan was never politics, but as a combat veteran’s wife I have seen firsthand what a call to duty looks like. I know that to make a difference in your community, you have to know when to stand strong for what you believe and when you must put aside your differences to work together,” a statement on Russo’s campaign website said.

Erin Pare, a former Army spouse of 12 years, recently won the North Carolina State Representative seat for District 37 running as a Republican. She and her husband have strong ties to the small community of Holly Springs, North Carolina, where they live and own a sporting goods store. As a small business owner, Pare found herself wanting to make changes in policies regarding small businesses in their area. Her platforms include a pro-growth economy, education, public safety and more.