"The Rock": The last stage for the two female Navy SEAL candidates - We Are The Mighty

“The Rock”: The last stage for the two female Navy SEAL candidates 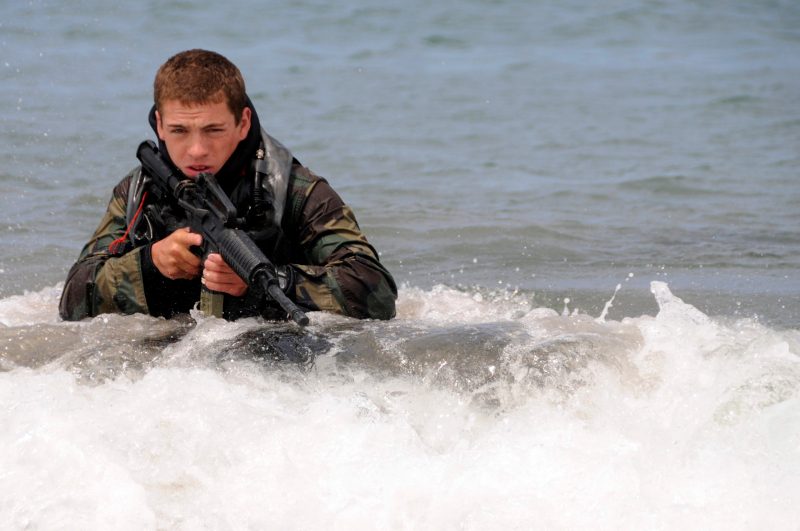 They had just completed a punishing land navigation course up in the mountains east of San Diego during heavy snowfall. They lost another four students from cold casualties and poor navigation skills that had resulted in them getting lost in the snowy mountains after dusk. Now the 28 students were headed out to “The Rock” at San Clemente island 80 miles off the coast of California.

On the Rock, they would learn basic marksmanship skills, weapons cleaning and breakdown, how to build electric and standard demolition charges, small unit tactics, and then do all that in and out of the water. It was basically pre-school for what was coming when they would graduate and go on to the three months of SEAL tactical training and then onto more core training in their SEAL platoons.

Everything got tougher on the Rock. The class worked with bare minimum sleep, three-four hours a night, and was expected to be sharp on the firing line and demolition range.

Everyone was fired up and they could taste graduation: it was so close but so far away.

The students were mentally tough, their minds were honed razor-sharp like a blade. They could take almost anything at this point. And the instructors knew that they had essentially created Godzillas in the closet who were banging to be let out.

Olga and JJ were the top shooters in the class. It didn’t matter what weapon system, be it the HK.45, M4, or M60, they were deadly accurate, much to the surprise of their class.

The first time Olga felt the rumble of the big M60 in her hands she was hooked, like a heroin addict after shooting up dope for the first time, she couldn’t get enough. “I’m in love with this fucking machine gun,” she’d said to herself.

But she, JJ, and the rest of the class would face one of their biggest challenges in the weeks to come.

Every day, every minute, was a test for them. They were pushed harder and harder. The instructors knew they had to mold them into hardened steel because life in the Teams was harder.

“The Only Easy Day Was Yesterday.”

Olga also loved this small remote California island off the coast of San Diego, a shame that she had to share it with the wannabe environmentalists that were more interested in sucking off the Navy and justifying their existence than they were about protecting local species.

When Olga stepped off the plane she could smell the musty odor of kelp and sea salt in the air. Looking down the declining slope off the runway she could see the dark shaded blue of the Pacific Ocean and the tip of the SEAL training base, the obstacle course, and the rifle range with smoke coming from the demo range.

The north side of the Rock and the northwest harbor was owned by Naval Special Warfare. It housed the BUD/S camp and the advanced training camp where the SEAL Teams rotated in and out. The SEALs had a demolition range, a 1,000-yard rifle, and pistol range just north of the runway, and the rough Pacific to play in. Northwest harbor was also home to a small seal lion habitat which attracted the “man in the grey suit,” as the instructors liked to remind the students. Sharks… and big ones.

To the south, there was a small town that housed mostly a few air traffic controllers, support personnel, and some Navy contractors. It had the island’s main pier, a chow hall, a small store, and “The Salty Crab”, a local restaurant and bar.

The main road ran down the center of the island, winding up and down small hills. The backside of the island to the south had incredibly jagged cliffs which the SEALs used to practice climbing, large surf operations, and rugged beach entries.

It was not for the faint of heart. San Clemente “The Rock,” 80-0miles off the California coastline was the perfect place for SEALs to train.

San Clemente was also used by the pilot community that practiced bombing runs on the south side of the island and landings and approaches on the main runway. The SEALs had the run of the island which was mostly barren with the exception of small shrubbery, cactus, and the island fox which was still hanging on despite the best efforts of the environmentalists to “fix” the delicate ecosystem. Their fixes turned into one fuck up after another.

Olga overheard the instructors talking at lunch one day about how the Navy-contracted environmentalists had decided that the snowy plover bird needed more food supply so they started hauling in mice. Soon the mice had overtaken the island and were threatening the local human population because they carried a strain of Hantavirus called “Sin Nombre.”

The “Envirotards” brought in cats by the boatload and soon the cats had taken over, eaten most of the mice, and the snowy plover’s food supply. Then contractors were brought to the island to hunt and shoot the cats at night with big spotlights.

The whole thing was a fucking mess.

Olga believed in protecting the environment. She had heard the nightmare stories from her grandmother about the nuclear meltdown of Cherynobl and how it destroyed so many lives. But, she agreed with the instructors who mentioned they should have just shot the environmentalists if they really wanted to solve the problem.

The town was off-limits to the students. Just as well for Olga who was a huge cat lover and would have loved to punch one of the envirotards in the nose. It was better if she stayed on her side of the island, she thought.

Today she was excited because the class was shooting for expert pistol and rifle qualification. Olga was sure she’d have no problem but that didn’t make her less nervous.

The pistol qualification was first. She shot the Sig Sauer P226 9mm and scored near perfect.

Next was the M4 rifle qual. This was a little more challenging because the wind howled on the north end of the island and sometimes the air that blew up from the ocean swirled around the jagged rocks and found its way up to the range in gusts. All this meant that even at 200 yards it could affect the bullet a few inches even if the shooter was holding perfect iron sight focus.

Olga timed the gusts. At the bottom of her exhalations, she unloaded the full magazine.

She felt good about the rifle test.

She and Ty were the top shooters in the class and she felt compelled to remind her classmates that evening at chow, how most of the top snipers in combat were women so there should be no surprise.

“You’re insane but I like your kind of insane Olga,” said Wedge at the dining hall.

A few of their classmates were outside on the cold metal tables nicknamed “Seaport Village.” The real Seaport Village was along the bay’s edge in downtown San Diego and had shops and outdoor restaurants. Her classmates didn’t meet the minimum pull-up requirements to eat dry or had cheated with half-empty water canteens. Now they had to do 20 dead hang pull-ups with full kit, any less and it was a trip down to the beach.

She liked Wedge because he led by example. So few leaders do this, Olga thought.

They were so close to graduation but it seemed so far away on this crazy rock off the California coast.

Click here to read all the installments of The Reservation.