From little girl in Ghana to Legislative Fellow in the U.S. Government; Reserve Citizen Airman embodies the American Dream - We Are The Mighty

From little girl in Ghana to Legislative Fellow in the U.S. Government; Reserve Citizen Airman embodies the American Dream 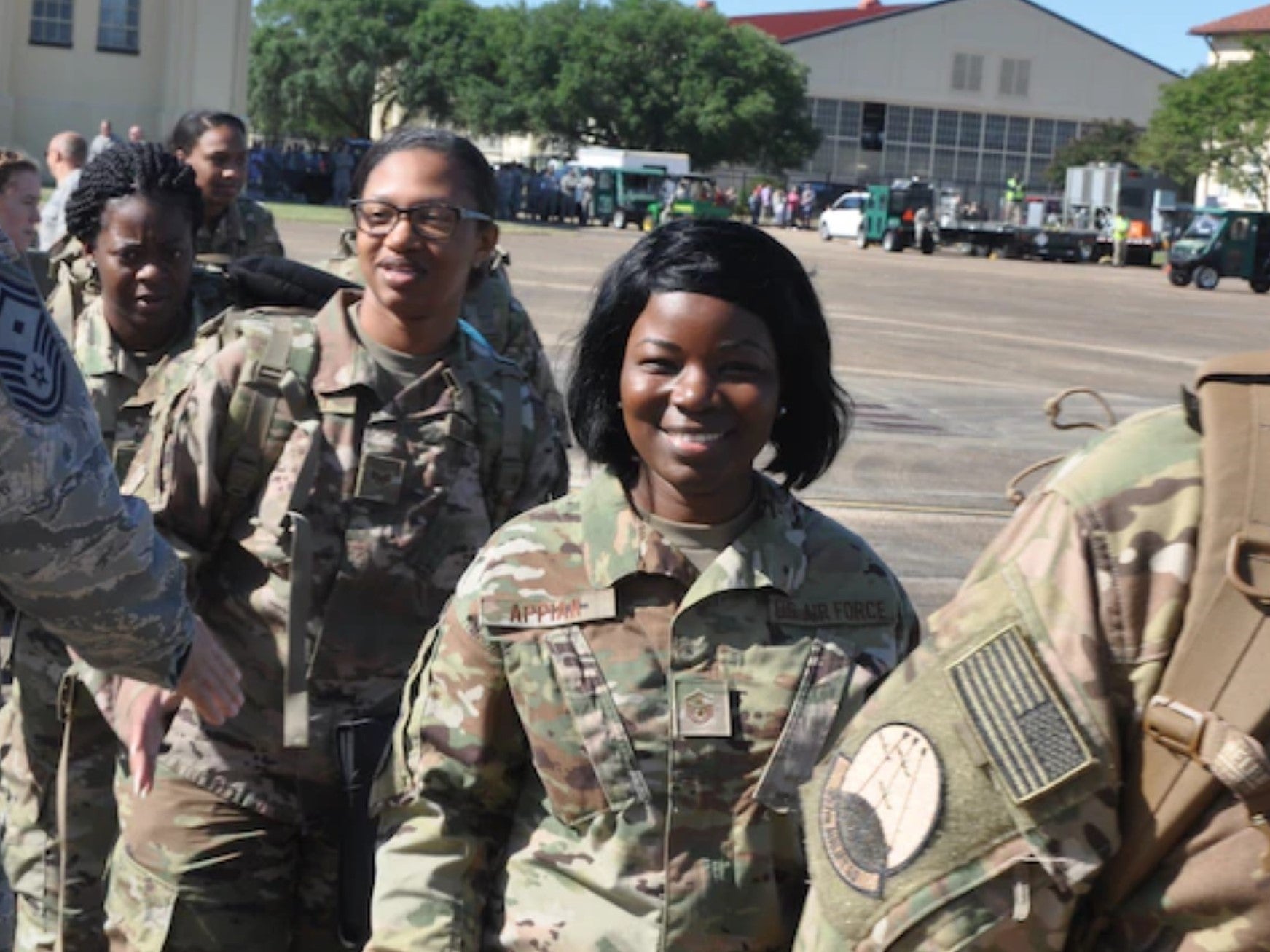 Her tepid attempt to subdue a smile betrayed a subtle amour-propre, grounded in mollifying unpretentiousness, as she sketched a picture of her childhood home in a sub-region of West Africa on a yellow Post-It note. Called a “compound house,” she shared the square-shaped structure with her great grand-parents, cousins, and several other members of her extended family. Rooms lined the walls facing inward toward an open living-area where the resident children would spend their days playing.

Senior Master Sgt. Eva Appiah (ah-pee-ah), 357th Airlift Squadron first sergeant, was raised by a working-class single mother in the small village of Agona Swedru in the Republic of Ghana, a country along the Gulf of Guinea in the Eastern Atlantic Ocean. Her mother and grandmother consistently stressed the importance of education, she reminisces, because they wanted her to have a better life than they had. Every school day, her grandmother would pay for a cab service to drive her and her cousin to attend.

Appiah’s mother sent her to study at Swedru International School (SWIS), a boarding school 45 minutes from their home, as it was more economical than funding a daily commute. As a result, she learned to become self-reliant at an early age. Appiah chuckled as she remarked, in a tongue-in-cheek manner, that her life at the boarding school prepared for life in the military.

“As typical of children in Africa, I became independent quickly,” she said as she twisted gently from side to side in her swivel-chair, her head titled slightly upward and her eyes scanning the recesses of her memory for dusty images of a time long ago. “In boarding school, our parents weren’t there to get us up for school or get us ready. We were structured to wake up, clean the campus, get ready for school, walk one-quarter mile to the school, and go in and study. Sometimes we had extra duties such as making sure all the tables and chairs were aligned properly.”

Though she had a few friends at SWIS, there wasn’t much time for socialization. Some people chose to participate in sports and other extra-curricular activities. Appiah, a self-proclaimed “nerdy-type,” tried out for track and field, but didn’t much care for it, instead opting to join choir. She cites her exposure to classmates from different cultures and dialects as preparing her for her eventual move to the United States.

Appiah longed to move out of Africa. With relatives in London, Amsterdam, and other European cities, she assumed she would end up there. However, in 1996 her mother announced she was getting married and the two of them were moving to America to join her step-father. In early October, at the age of 14, she and her mother arrived and settled in at Smiths Station, Alabama. One week later, on October 17, she enrolled at Smiths Station High School.

Her new classmates did not receive her openly. Even though she could read, write, and understand English (at SWIS, one could be expelled for failing to attain proficiency in the subject), she spoke with an accent. It didn’t help that she was more intellectually advanced than her peers. As a freshman she was taking classes with students in higher grade levels. Fellow students would say “not so nice” things to her and about her. She would go home and cry to her mother every night how she didn’t fit in.

As is characteristic of her unstoppable drive and hyper-optimistic view of life, Appiah turned an adverse situation into a growth opportunity. She began mimicking pronunciations of those around her, honing her observation skills and attention to detail, attributes befitting military service. For instance, back in Ghana, they would pronounce the English word “girl” as “gell.” She would over hear someone say something like, “hey, girl” or “come here girl,” and she would make a mental note and practice the pronunciations when at home. She slowly lost her accent and began to articulate in the local vernacular.

After graduating high school, Appiah’s mother urged her to join the United States Navy. Appiah declined. “I wasn’t going into anyone’s Navy,” she stated matter-of-factly as she shook her head with the corners of her mouth drawn down in the “uh-uh, no way” configuration. “I don’t know how swim.” That was that, and it was off to attend college at Auburn University Montgomery in Montgomery, Alabama.

During her freshman year, she moved off campus with her roommate. Appiah, un-familiar with the provisions of student financial aid, believed that she could use the funds for rent. She could not, a lesson she admittedly learned the hard way.

“All of a sudden I realized, hey, I have to pay half these bills. I need a job.”

Appiah obtained two part-time jobs, which she worked at for a few months, but then decided she wanted to join the military. On May 30, 2002, without her mother’s consent, she enlisted in the United States Air Force Reserve. After basic training and technical school, she was assigned to the 908th Airlift Wing, Maxwell AFB, Alabama, where she served several years in several different positions within the Logistics Readiness Squadron.

In 2016, armed with a master’s degree in health administration, Appiah applied for an officer commission in the Air Force Reserve, hoping to serve in the medical field. Her application was turned down. Though she was disappointed, she didn’t let it set her back. She had been told by numerous Airmen and senior noncommissioned officers that she would make an excellent first sergeant, so that’s what she became.

As a first sergeant, Appiah helped implement and lead quarterly enlisted calls. These were meetings held during the Reserve’s monthly Unit Training Assembly where important information, such as deadlines for Enlisted Developmental Education Board, Enlisted Education Plan, or Stripes for Exceptional Airmen packages, were discussed. While reading the EDEB invitation to apply and course descriptions, she noticed the opportunity to serve as Air Force Reserve Command Enlisted Legislative Fellow.

The fellowship provides hands-on experience through education and development activities consisting of an intensive orientation of Congress. The 54 month commitment includes six months of academic courses, one year on Capitol Hill as staffer to a member of congress or committee and a 36-month post-fellowship active-duty service commitment in the National Capital Region. The position intrigued her; however, she also noticed they were only looking for one primary and one alternate for the position and didn’t further consider applying.

Ironically, during the next enlisted call, facilitator Senior Master Sgt. Justin Nettles, a 908th Airlift Wing Operations Group loadmaster, mentioned the legislative fellow position. Appiah raised her hand and informed him that they were only accepting one person as the primary. Nettles then posed a question to the audience which would change the trajectory of her career: “What if you are that one person?”

In March 2020, the COVID-19 pandemic reared its ugly head and the country-wide shutdown began. The U.S. military was not exempt, as meetings, conferences, classes, and other mass gatherings were promptly cancelled or indefinitely postponed. Appiah received a notice that the EDEB had been cancelled, except to convene to decide the legislative fellow.

Appiah remembered Nettles’ question, how she encourages Airmen to aim high, and thought, “What if I am the one person?”

“I’ve always had interest in policies, and how they are developed, debated, and enacted for the betterment of servicemembers,”she said. “I also strongly encourage every Airman to look for opportunities and not be afraid to take a leap. I needed to take my own guidance.”

With the help of her then group commander, retired Col. Don Richey, the 357th Airlift Squadron’s director of operations, Lt. Col. Diane Patton, and wing command chief, Chief Master Sgt. Tracy Cornett, Appiah submitted her application. Soon after, she was notified she was a finalist. A few days after a virtual interview with three panel members, she was notified that she had been selected as the primary. Her leap of faith worked. Indeed, she was the one.

“I’m a bit nervous,” she confessed. “I’ve spent most of my life here in Alabama, but if I’m to accomplish bigger and better things I need to step out of my comfort zone. That is how we grow. We take that first step. I believe in having faith over fear.”

This is not at all surprising considering the meaning of her name. “Eva” is from the Hebrew “Eve” meaning life, living one, or full of life. The surname “Appiah” dates to the Ashanti Empire (1701 to 1957) and means king, prince or fearless warrior. Quite literally, “Eva Appiah” means “Fearless Warrior of Life.”

With an inextinguishable spirit and an ostensible tranquility, Appiah knows if she falls she will pick herself back up and keep moving forward.

“I’m ready for the challenge,” she declared. “I’m ready.”