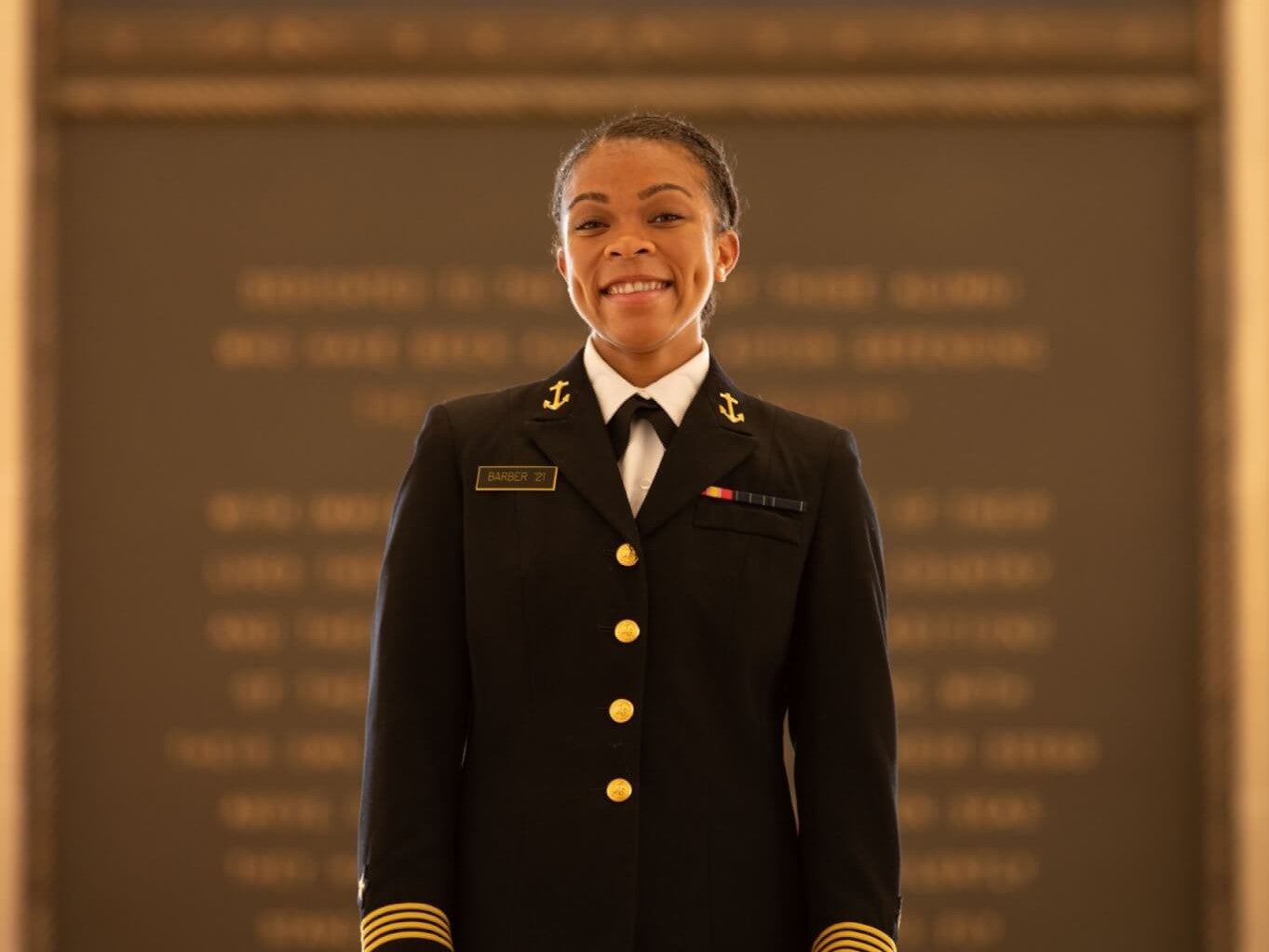 As the undergraduate college of our country’s naval service, the Naval Academy prepares young men and women to become professional officers of competence, character, and compassion in the US. Navy and Marine Corps. (U.S. Navy Photo by Mass Communication Specialist 2nd Class Nathan Burke)

Listening to 1st Class Midshipman Sydney Barber speak can make someone wonder if they are living up to their potential. But that’s what she does — reaches high and inspires those around her to do the same.

Barber, 21, found purpose at a young age through community service and now is making history as the first Black female brigade commander for the U.S. Naval Academy. And this is only the beginning of her professional impact.

Barber was chosen for this role because of her outstanding ability to perform as a leader. To plow a different path than her parents, who were both in the Navy, she initially resisted joining the Academy. But Barber learned a valuable lesson as a teenager — find your purpose and let it drive you. Her journey has been packed with life-changing moments of awareness.

Barber grew up in an affluent community in Lake Forest, Illinois, but her family had a lower socioeconomic status than her peers.

“I wasn’t going on the nice vacations and I didn’t have all the nice cars,” she said.

Her classmates drove Mercedes Benzes, BMWs, and Teslas in their sophomore year of high school, and she didn’t have a vehicle.

“I would often compare myself to the people around me,” she said. “But I know it wasn’t till later that I realized that I have everything that I need.”

She refers to this realization as her “awakening.”

As a middle schooler, a time when many kids are hanging out with their friends, Barber started serving at homeless shelters and soup kitchens.

“I remember that was a very eye-opening experience for me early on in my life,” she said. She also served with the Senior High Youth Group (SHYG) and led a small group for fifth- and sixth-graders.

“I really found my niche within my church community and within the community service clubs at my school,” she said.

Helping people in underserved areas like inner-city Chicago, India, and the Dominican Republic fostered a heart for service and opened her eyes to what matters.

“I saw people who were so filled with joy and passionate in their lives, not because of materialistic things or because of an abundance of money, but just because of their faith and their family and their purpose,” she said.

Afterward, she says she found a greater calling and more purpose in life by using that passion to give to others. It was the idea of service that guided her during the college selection process.

Barber discovered that the Naval Academy was the perfect place, because of its rigorous academics and dual alignment with her goals.

Read: This helicopter pilot will be the first female air craft carrier CO.

As Barber steps into her new role as brigade commander, she will lead over 4,000 midshipmen. Her duties will include managing their daily activities and professional training for the length of the semester. It wasn’t until 1976, 131 years after the Academy was founded, that women were admitted. Barber is one of 15 chosen to lead in the last 44 years. But most importantly, she is the first Black woman in command.

Brigade commander isn’t a role she initially set out for, but the value she places on her purpose won’t let her sit on the sidelines. Her internal push to be the best leader means jumping at any opportunity for professional growth and the chance to make others better.

However, she still faced some doubts.

“I thought that I had a very little chance of getting it just because it’s very competitive … The thing that really hit me over the edge is I didn’t want to be the person to count myself out and tell myself no,” she said.

Barber pursued this position, not because of her gender or race, but because she felt like she had to pursue it.

“It had to be because I knew that I was going to be Black and female and a great leader.”

Barber will continue to put her heart and soul into pursuing every chance to stretch herself while simultaneously making an impact. After graduation, she will be commissioning into the Marines, where she plans to be the best.