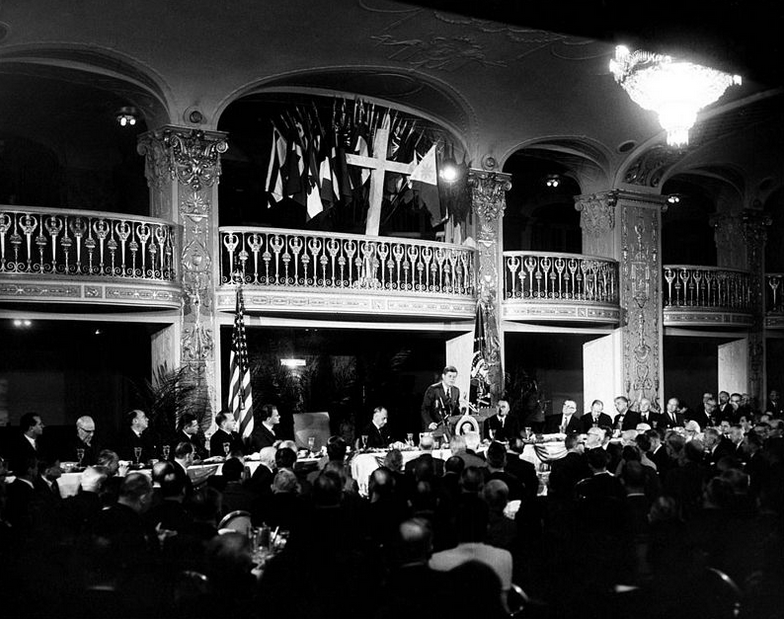 The National Prayer Breakfast has been an event attended by American presidents since its inception. February 4, 2021 it will be conducted virtually for the first time in its 68 year history.

The origin of the National Prayer Breakfast actually began in the 1930s. Abraham Vereide organized prayer groups throughout the Seattle area. Later on he moved to Washington D.C. and began creating similar events within Congress. At the invitation of one of the Congressional members and Billy Graham, President Dwight Eisenhower attended the first “official” National Prayer Breakfast in 1953.

Although it was called the President’s Prayer Breakfast until 1970, it began a long and rich tradition.

American presidents have been sitting down in faith and prayer ever since. It has often been the first speech made by the newly inaugurated president, since the current president is always one of the speakers at the event. Hosted by members of Congress and The Fellowship Foundation, it has grown and changed over the years.

Guests from over 100 countries attend the gathering which used to host around 400 and now boasts as many as 4,000. Although originally attended by those practicing the Christian faith, it has involved being inclusive of all. Jewish, Muslim and Buddhists could all be sitting at the same table. Cities and countries all over the world have also been modeling and having their own National Prayer Breakfast events, with many military bases joining in too.

Although religious in its very nature, at the heart of the Prayer Breakfast lies the deep hope for the future of man and goodwill to all.

Some of the more notable prayers and moments from previous National Prayer Breakfasts of the past below demonstrate that spirit. As history has shown us, we aren’t the first generation to experience such loss and hardship.

As we approach the next National Prayer Breakfast with President Biden at the helm, the country does so with heavy but hopeful hearts. Below are some of the more notable remarks and prayers from past presidents.

“As Benjamin Franklin said at one time during the course of the stormy consultation at the Constitutional Convention, because he sensed that the convention was on the point of breaking up: ‘Gentlemen, I suggest that we have a word of prayer.’ And strangely enough, after a bit of prayer the problems began to smooth out and the convention moved to the great triumph that we enjoy today–the writing of our Constitution.”

“These breakfasts are dedicated to prayer and all of us believe in and need prayer. Of all the thousands of letters that are received in the office of the President of the United States, letters of good will and wishes, none, I am sure, have moved any of the incumbents half so much as those that write that those of us who work here in behalf of the country are remembered in their prayers….This morning we pray together; this evening apart. But each morning and each evening, let us remember the advice of my fellow Bostonian, the Reverend Phillips Brooks: ‘Do not pray for easy lives. Pray to be stronger men! Do not pray for tasks equal to your powers. Pray for powers equal to your tasks.'”

“No man could live in the house where I live now or work at the desk where I work now without needing and without seeking the strength and the support of earnest and frequent prayer. Since last we met, it has fallen to me to learn personally the truth Thomas Jefferson spoke so long ago, when he said: ‘The second office of the Government is honorable and easy; The first is but a splendid misery.’ In these last 70 days, prayer has helped me to bear the burdens of this first office which are too great to be borne by anyone alone.”

“Since we last met, I have discovered another aspect of the power of prayer: I have learned how important it is to have people pray for me. It is often said that the presidency is the loneliest job in the world. Yes, and in a certain sense, I suppose it is. Yet, in all honesty, I cannot say that I have suffered from loneliness these past six months. The reason, I am certain, has been that everywhere I go, among old friends or among strangers, people call out from the crowd or will say quietly to me, ‘We’re praying for you,’ or ‘You are in our prayers,’ and I read the same sentiments in my mail. Of course, there are some that are not so inspiring, but the great ground swell of good will that comes from the true spirit of America has been a wonderful source of strength to me as it was, I am sure, to other Presidents before me.”

“But this is what I would like to leave with you. To set a time in each day to list all of the things that you consider to be most difficult, most embarrassing, the worst challenge to your own happiness, and not only ask God to alleviate it but preferably thank God for it. It might sound strange, but I guarantee you it works. And you might say, ‘Why in the world should I ask God for thanks — give thanks, for something that seems to me so bad or so damaging?’ Well, growth in a person’s life, growth for a nation, growth spiritually, all depend on our relationship with God. And the basis for that growth is an understanding of God’s purpose, and a sharing of difficult responsibilities with God through prayer.”

“We all in this room, I know, and we know many millions more everywhere, turn to God in prayer, believe in the power and the spirit of prayer. And yet so often, we direct our prayers to those problems that are immediate to us, knowing that He has promised His help to us when we turn to Him. And yet in a world today that is so torn with strife where the divisions seem to be increasing, not people coming together, within countries, divisions within the people, themselves and all, I wonder if we have ever thought about the greatest tool that we have — that power of prayer and God’s help.”

“We’re facing some serious opportunities and some great opportunities in our country — tough problems and great opportunities. And I believe that a wonderful resource in dealing with them is prayer — not just prayer for what we want but prayer for what is in the heart of God for us individually and as a nation. And shouldn’t we also remember, with all that we have to be grateful for, to pause each day to offer a prayer of thanksgiving. All of us should not attempt to fulfill the responsibilities we now have without prayer and a strong faith in God. Abraham Lincoln said: ‘I’ve been driven many times to my knees by the overwhelming conviction that I have nowhere else to go.’ Surely he was not the first President, certainly not the last, to realize that.”

“You do not make peace with your friends, but friendship can come with time and trust and humility when we do not pretend that our willfulness is an expression of God’s will. I do not know how to put this into words. A friend of mine last week sent me a little story out of Mother Teresa’s life, when she said she was asked, ‘When you pray, what do you say to God?’ And she said, ‘I don’t say anything. I listen.’ And then she was asked, ‘Well when you listen, what does God say to you?’ And she said, ‘He doesn’t say anything, either. He listens.’ In another way, St. Paul said the same thing: ‘We do not know how to pray as we ought, but the Spirit, Himself, intercedes for us with sighs too deep for words.’ So I ask you to reflect on all we have seen and heard and felt today. I ask you to pray for peace, for the peacemakers, and for peace within each of our hearts — in silence.”

“Every president since the first one I can remember, Dwight Eisenhower, has taken part in this great tradition. It’s a privilege for me to speak where they have spoken and to pray where they have prayed. All presidents of the United States have come to the National Prayer Breakfast, regardless of their religious views. No matter what our background, in prayer we share something universal, a desire to speak and listen to our Maker and to know His plan for our lives….I believe in the power of prayer. It’s been said, ‘I would rather stand against the cannons of the wicked than against the prayers of the righteous.’ The prayers of a friend are one of life’s most gracious gifts.”

“…And should that faith waver, should I lose my way, I have drawn strength not only from a remarkable wife, not only from incredible colleagues and friends, but I have drawn strength from witnessing all across this country and all around this world, good people, of all faiths, who do the Lord’s work each and every day. Who wield that power and love, and sound mind to feed the hungry and heal the sick, to teach our children and welcome the stranger. Think about the extraordinary work of the congregations and faith communities represented here today.  Whether fighting global poverty or working to end the scourge of human trafficking, you are the leaders of what Pope Francis calls ‘this march of living hope’.”