Under the Radar by Military.com 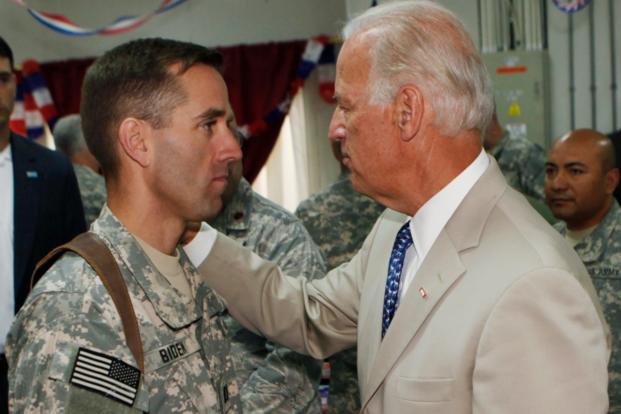 As President Joe Biden was addressing the nation Wednesday after swearing in as the 46th U.S. president, a quiet moment was captured 110 miles away from the nation’s capital.

A journalist with The News Journal in Delaware saw a lone person in a blue uniform kneeling over the grave of the president’s late son, Beau Biden, who died in 2015 at the age of 46.

“No one else was around on this cold, windy afternoon except for a few people doing outside work at the cemetery,” Patricia Talorico, the News Journal reporter, wrote about the moment. “… The person in the uniform bowed their head and clasped their hands. The image brought tears to my eyes.”

Read Next:Biden Says US Will Repair Its Alliances, Calls for Americans to Unite

The person captured in Talorico’s viral photo, which was shared by tens of thousands on social media, has not been identified. Talorico said that while the journalist in her wanted to ask the person’s identity and see why they were there, she “knew it was a time to be respectful.”

“I drove away,” she said, adding, “Some things in life you just let be.”

Beau Biden, a lawyer who served in the Delaware National Guard, is buried at St. Joseph on the Brandywine Church cemetery in Greenville, Delaware. In 2008, he deployed as a major to Iraq, where he served on the staff of Biden’s defense secretary nominee, retired Army Gen. Lloyd Austin.

Before Biden left Delaware this week ahead of his inauguration, he spoke at the Major Joseph R. “Beau” Biden III National Guard/Reserve Center, which is named for his son.

“Ladies and gentlemen, I only have one regret: He’s not here,” Biden said of his son, fighting back tears. “Because we should be introducing him as president.”

The person at Beau Biden’s grave kept their head bowed before and after Biden’s roughly 20-minute inauguration address, clasping their hands, Talorico wrote.

Biden, who said in a 2019 speech that he suspects his son’s cancer was caused by exposure to burn pits in Iraq, is expected to expand medical benefits for veterans who became sick after being exposed to environmental toxins.

“President-elect Joe Biden has made clear that our nation’s most sacred obligation is to take care of the members of our military and their families, when they’re deployed and when they return home,” Leo Cruz, Biden’s military and veterans issues campaign director, told McClatchy after the November election.