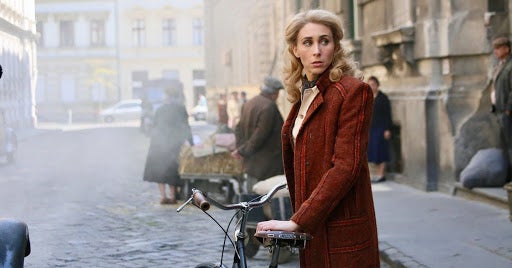 Virginia Hall was one of the most successful espionage operatives of World War II, earning not only the contempt of the Gestapo, but also the Distinguished Service Cross — the only civilian woman to be so honored. As a spy, she organized agent networks, recruited the local population of occupied France to run safe houses, and aided in the escape of Allied prisoners of war.

Oh, and she did it all with a wooden leg named ‘Cuthbert.’

Hall’s story is coming to the big screen in the feature film A Call To Spy, written and produced by Sarah Megan Thomas, who also plays “the limping lady” herself alongside Stana Katic (Castle, Absentia) as Vera Atkins and Radhika Apte (Andhadhun) as Noor Inayat Khan.

A Call To Spy features the unsung spies of Winston Churchill’s Secret Army — including their personal sacrifices, particular challenges and dangers, and social barriers that still resonate today.

Virginia Hall was recruited by British spymaster Vera Atkins to report on German troop movements and recruit members for the resistance in France. Posturing as an American news reporter, she encoded messages into news broadcasts and passed encrypted missives to her contacts.

She signed up with the U.S. Office of Strategic Service and in 1944 she organized missions to sabotage the Germans. She is credited with more jailbreaks, sabotage missions, and leaks of troop movements than any other spy in France.

In a conversation with Thomas, I asked why she was drawn to tell this particular story. “I loved James Bond. I loved Dunkirk and 1917. But by and large, if a woman is in a military film, the story involves a romance — and I know they have more significant roles than that,” she told me. “I studied World War II spies extensively and finally uncovered the women in Churchill’s Secret Army. For my film, I decided to concentrate on women who were part of the mission before it became a success.”

In studying women’s roles in particular during World War II, Thomas was surprised to discover just how many untold stories there actually are.

“In 1941, we were losing the war. Americans hadn’t yet joined the Allies. Women were recruited as an experiment. They were sent in because they were inconspicuous, they were unexpected. And it turned out they were very good spies,” Thomas observed.

“I was also surprised at how different the women were. Their only commonality was that they spoke French — but they came from all walks of life,” she explained. As women are featured more and more in stories previously centered on men, audiences are seeing the spectrum of personalities and strengths they have to offer.

A Call To Spy won the Audience Choice Award at Whistler Film Festival and the ADL Stand Up Award at the Santa Barbara International Film Festival. Thomas’ previous Sony Pictures Classic film Equity, a film about women on Wall Street, premiered at the 2016 Sundance Film Festival. Thomas created the concept, co-wrote the story, produced, and starred in the film alongside Anna Gunn.

A Call To Spy shares the 2020 challenge of being released during the COVID-19 pandemic. For an independent filmmaker, it came with a whole new host of challenges to solve. “We don’t have a $50 million press budget — we need word of mouth,” she explained. The film screened successfully and won awards at festivals before the pandemic, but afterwards Thomas and her team had to pivot.

She’s been following her own advice for emerging filmmakers: “Just do the work. It’s a difficult profession no matter what level you’re at — don’t let that be daunting. The right people will say yes at the right time.” Thomas is currently working on a mini-series that is a spin-off of the film.

“Audiences can expect a thrilling and entertaining spy film, but I also hope after they watch that there’s something to discuss on a personal level. How many people would put their lives on the line with such difficult odds? Right now we’re at a global crossroads — what sacrifices are we willing to make for each other?” she pondered.

Distributed by IFC films, A Call To Spy is currently available in some theaters or for streaming online.