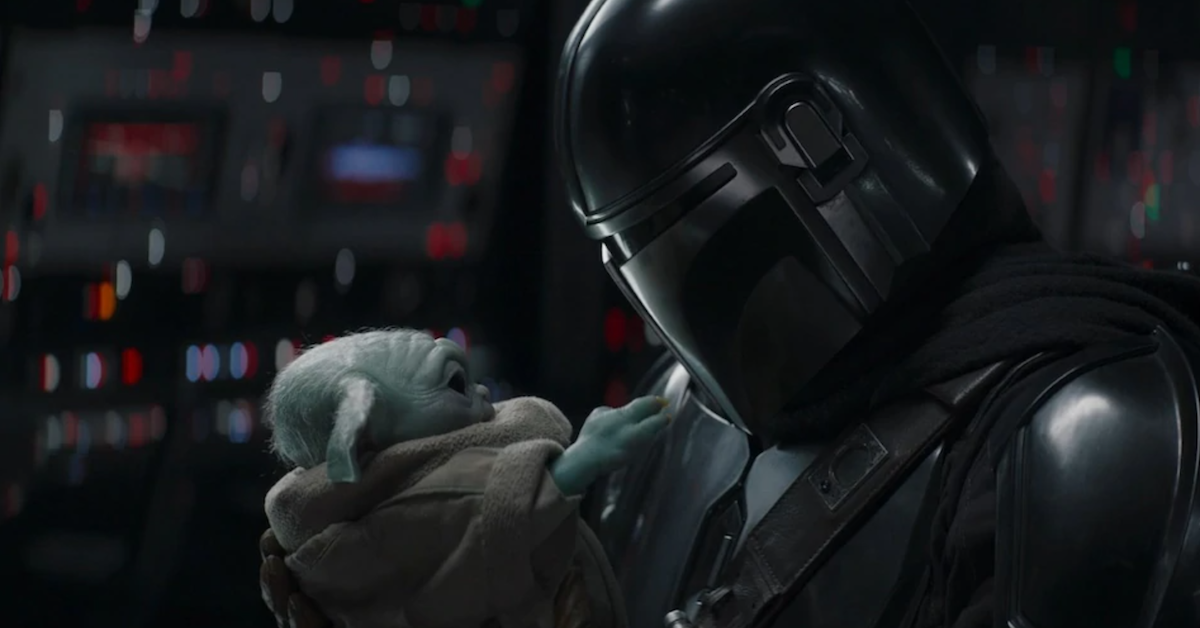 Chapter 16 “The Rescue” absolutely nailed three things: fight choreography, music, and Star Wars lore. It was so good, in fact, that I don’t know how the show will ever be able to top it, but if nothing else, season two showed that creator Jon Favreau is hitting his stride.

Spoilers through season 2 episode 8 ahead.

The hunt for Grogu the Yoda Baby is on.

The episode opens with a successful attack against Dr. Pershing’s transport ship, where Alderaan native Cara Dune faced an Imperial soldier who had proudly been aboard the first Death Star when it destroyed her planet. After exploring so many enslaved Stormtrooper stories in Episodes VII-IX, it’s nice to face an enemy with violent ideals that deserve to be quelled again.

For Alderaan. #NeverForget (The Mandalorian, Disney+)

With Dr. Pershing (Omid Abtahi) and his ship captured, discovering the location of Moff Gideon (Giancarlo Esposito) becomes easy work. Din Djarin (Pedro Pascal) recruits the help of some old friends, the Mandalorians Bo-Katan Kryze and Koska Reeves (Mercedes Varnado) and they devise their plan: fly the transport ship to Gideon’s cruiser under pursuit by Boba Fett’s Slave II. Once on board, Kryze, Reeves, Dune, and Fennec Shand (Ming-Na Wen) will attack the bridge and subdue Gideon while Djarin shuts down the Dark Trooper activation and rescues the child.

Again I want to iterate, the fight sequences are just plain fun in this episode. The Mandalorian armor means new fight tactics and choreography, and the stunt coordinators really capitalized on each fighter’s different attributes. At one point Dune’s weapon jams and she just starts pummeling Stormtroopers with it like a baseball bat.

When Djarin makes it to the Dark Trooper bay, he’s a heartbeat too late: one Dark Trooper manages to open the blast door. Director Peyton Reed really nailed some of the camera shots here while Ludwig Göransson’s score is better than ever. The Dark Trooper music really is bitchin’ — it almost reminds me of Daft Punk’s Tron: Legacy work.

Here we get to see the full strength of the Dark Troopers. Djarin really struggles to defeat just one — his Beskar armor is the only thing keeping him alive. Meanwhile, the rest of the platoon pounds the blast doors, breaking through at any moment. Finally, Djarin’s Beskar spear destroys the Dark Trooper and he opens the external launch door and sucks the troopers out into space.

The women successfully take the bridge…but no Moff Gideon. Instead, Djarin finds him in Grogu’s cell, holding the Darksaber over the little guy’s head. Djarin fights Gideon and manages to defeat and disarm him before marching him to the bridge.

Here, things get interesting. All Bo-Katan has been wanting is to find Gideon and reclaim Darksaber, which will give her the right to rule the throne of Mandalore. Unfortunately, it turns out that she needed to have won the saber in combat — much like the Elder Wand in Harry Potter. As Djarin was the one who took it from Gideon, Bo-Katan refuses to accept the saber when Djarin yields it back to her.

Put a pin in that.

This is when the platoon of Dark Troopers returns, boarding the ship and making quick work of the blast doors. Our group of heroes will never be able to take them…but we know from last week’s episode that a Jedi is coming…

…and sure enough, one does. The reveal is as predictable and f***ing satisfying as it could have possibly been. An X-Wing fighter appears outside the ship. Through the security footage we see a robed figure emerge and begin to battle the Dark Troopers. Finally, we see the green blade.

One by one, the Jedi and his lightsaber destroy the Dark Troopers. Little Grogu feels his presence and watches the footage with curiosity. Finally, he enters: Luke Skywalker.

In a heartwarming scene, Luke promises to protect Grogu with his life and train him to use the Force. Djarin removes his mask and Pascal delivers a fantastic and moving performance (considering there were so few words and he was holding a doll) as he says goodbye.

R2-D2 shows up and is cute as shit. Luke takes the baby. The day is won.

Okay, remember that pin? Let’s talk about it.

The first two seasons have all been about Djarin protecting the child. Now that Grogu is off to Luke’s Jedi Temple, what will Djarin do? Well, I have a feeling he’ll be diving deeper into his Mandalorian roots. Bo-Katan wants to rule and restore the Mandalorians — and she wants to do it with Darksaber. Will she become a nemesis to Djarin? Will they solve the ownership of the Darksaber with a friendly duel? I guess we’ll find out in season three!

Oh, and make sure you check out the post-credits for a fun little revenge scene.