Walk in My Combat Boots, a Fox Nation special you don’t want to miss - We Are The Mighty

Walk in My Combat Boots, a Fox Nation special you don’t want to miss 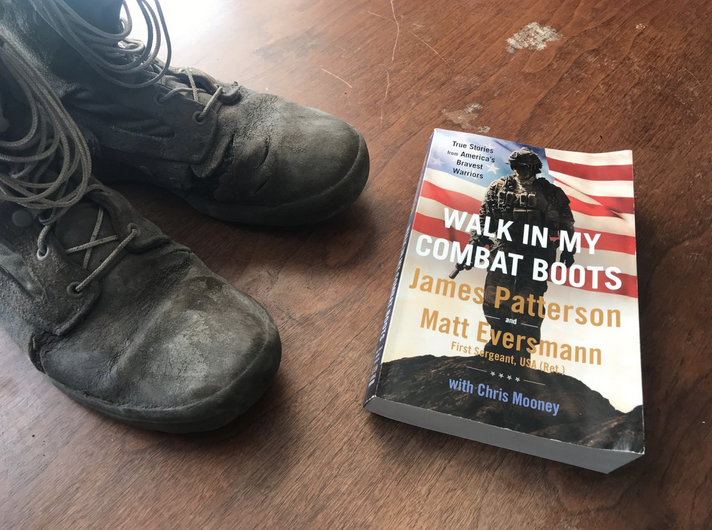 On February 10, 2021 – Fox Nation will air Walk in My Combat Boots, its newest military special.

The one-hour special will be presented by Best-Selling Author James Patterson and Army First Sergeant (ret.) Matt Eversmann, whose story was featured in Black Hawk Down. The aim of the television special is to give viewers a true look behind the curtain of service to country and what the implications of that service actually mean.

Patterson’s book list is filled page-turning well-known thrillers like the ones featuring character Alex Cross, who was portrayed by Oscar-winning actor Morgan Freeman on the big screen. He recently partnered up with Eversmann to write Walk in My Combat Boots, released February 8, 2021. The new book features stories from veterans across the span of the past fifty or so years and was created after undergoing hundreds of interviews with service members. This collection of stories takes the reader deep into what military service is really like.

One review of the book said it best: “Up close war is a tapestry of individual stories, as painfully raw, improbably funny, and completely human as the soldiers themselves. James Patterson and my former Ranger comrade Matt Eversmann, have brilliantly woven together an image that is as compelling as it is entertaining.” ―Stanley A. McChrystal, General, US Army (Ret.)

It was this groundbreaking book that was the inspiration for the Fox Nation special.

Eversmann himself will share his experiences of war and the jaw-dropping daytime raid he led fellow rangers on back in 1993. It would be those hours that would lead to the world-renowned book and eventual movie, Black Hawk Down. He was awarded the Bronze Star with Valor for his courage and heroism during that battle, which he eventually wrote about in The Battle of Mogadishu: Firsthand Accounts from the Men of Task Force Ranger.  Eversmann would go on to teach and eventually live with the Iraqi Army for 15 months during The Surge of the War on Terror. Following his retirement from active duty, he dedicated his life to serving the veteran community.

The reality of the after effects of war is hard to comprehend for the American public who may only read about things that occurred or see it portrayed somewhat realistically on film. This special takes you deep inside what comes after service and it isn’t always the pretty red, white and blue you imagined.

For the special, Patterson and Eversmann bring in Retired Army Sergeants Jason Droddy and Kevin Droddy, who are twins, to recount their experiences before, during and after service. In the clip shown to WATM we hear how the men did everything growing up together and it was no surprise to anyone that they enlisted and served together as well. In fact, they would even be put into the same unit, 3rd Ranger Battalion and deploy together. They’d be doing everything together, except combat. In the special, the viewers will hear the recounting of that experience.

Those watching at home will also hear from retired Sergeant Jena Lewis and Retired Staff Sergeant Jon Eyton, as they tell their stories of loss, combat and coming home.

As America heads towards 20 years at war, this special has never been more relevant and needed. While stories of the troops’ heroism and loss used to dominate the television and newspapers fifteen years ago, they are barely a line or two today. To truly thank a servicemember for their service, you must first recognize and understand what the true cost of war is and what serving the country really looks like.

Walk in My Combat Boots on Fox Nation will show you.