How the Marine Corps gave Leon Spinks his shot at greatness 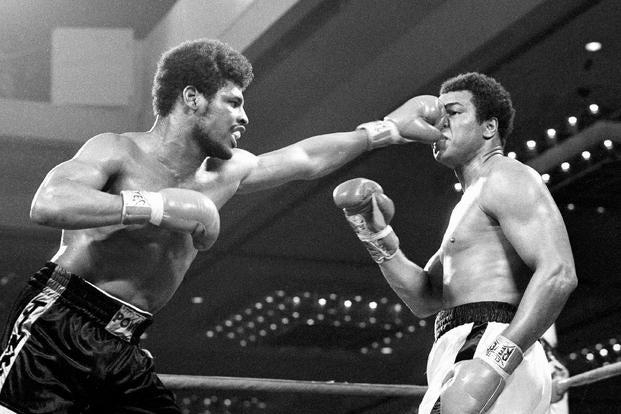 Former heavyweight boxing champion and Olympic gold medalist Leon Spinks joined the Marines as a pathway out of poverty, and the Corps’ sports program made him a champion.

Spinks died this weekend at the age of 67. Born in St. Louis, Missouri, he was the oldest of seven children. Beset by asthma as a child, he started boxing at age 13 at the city’s 12th and Park Center as part of a program to take kids off the streets.

He dropped out of high school to join the Marines in 1973 and won the Amateur Athletic Union’s amateur light heavyweight boxing championship for three consecutive years, from 1974 to1976.

While a Marine, Spinks was stationed at Camp Lejeune and became a well-known character around Jacksonville, North Carolina.

Mike Cline, chairman of the All-Marine Boxing Hall of Fame, told the Jacksonville Daily News in 2018, “He really liked the Camp Lejeune area and the town of Jacksonville. He always enjoyed coming back. This is like his second hometown.”Advertisement

It was the Marine Corps Boxing Team that honed Spinks’ skills and gave him the discipline to succeed on the biggest stage possible.

Spinks was named to the legendary 1976 U.S. Olympic boxing team alongside his younger brother Michael, who learned to box in the same St. Louis amateur program as Leon. Future boxing hall-of-famer Sugar Ray Leonard was also on the squad.

The fact that the games took place in the Eastern time zone allowed many of the bouts to air live on U.S. television, giving their accomplishments even more impact back home.

Those Montreal Olympics came at a crucial moment in the event’s history. They were the first Summer Olympics to be held after the terrorist attacks that killed 11 Israeli athletes at the 1972 games in Munich, so there was apprehension as athletes gathered to compete in Canada.

It was also the last Summer Olympics to feature both the U.S. and Soviet teams until the 1988 games in Seoul, South Korea.

Spinks turned pro after leaving the Marine Corps in 1976. He had only seven professional bouts under his belt when he was booked to fight heavyweight champion Muhammad Ali in February 1978, less than 18 months after he won his Olympic gold medal.

Ali’s defenders like to talk about the fact that he showed up fat and out of shape for the bout, but it’s indisputable that the champ was not prepared for Spinks’ relentless jabs. The “rope-a-dope” strategy failed to tire Spinks and, for the first time in his career, Ali looked old in a boxing ring. Ali lauded his opponent’s “will to win and stamina” after the fight.

The fight took place at a time when Ali was still reviled in much of American society for his refusal to report for military service after he was drafted in 1966 and his application for conscientious objector status was rejected. The fact that Ali lost his title to a Marine veteran was a cause for celebration in some quarters.

Ali regained his crown in a rematch seven months later, and Spinks never again enjoyed the same success in the ring. Still, the fact remains that he was the only boxer to ever take a title from Ali in a boxing ring. The (self-proclaimed) Greatest’s only other losses came in non-title bouts.

That’s one accomplishment that separates this Marine from Joe Frazier, Ken Norton and George Foreman. They may be considered among the greatest heavyweights of all time, but Spinks is the only one to beat Ali when it counted most.

Spinks’ last battle was a fight against prostate cancer that spread to his bladder. Hospitalized in December 2019, the fighter survived a year during the worst pandemic of the last century before passing away at his home in Henderson, Nevada.