In first, Air Force flies B-1 Bomber with externally mounted stealthy cruise missile - We Are The Mighty 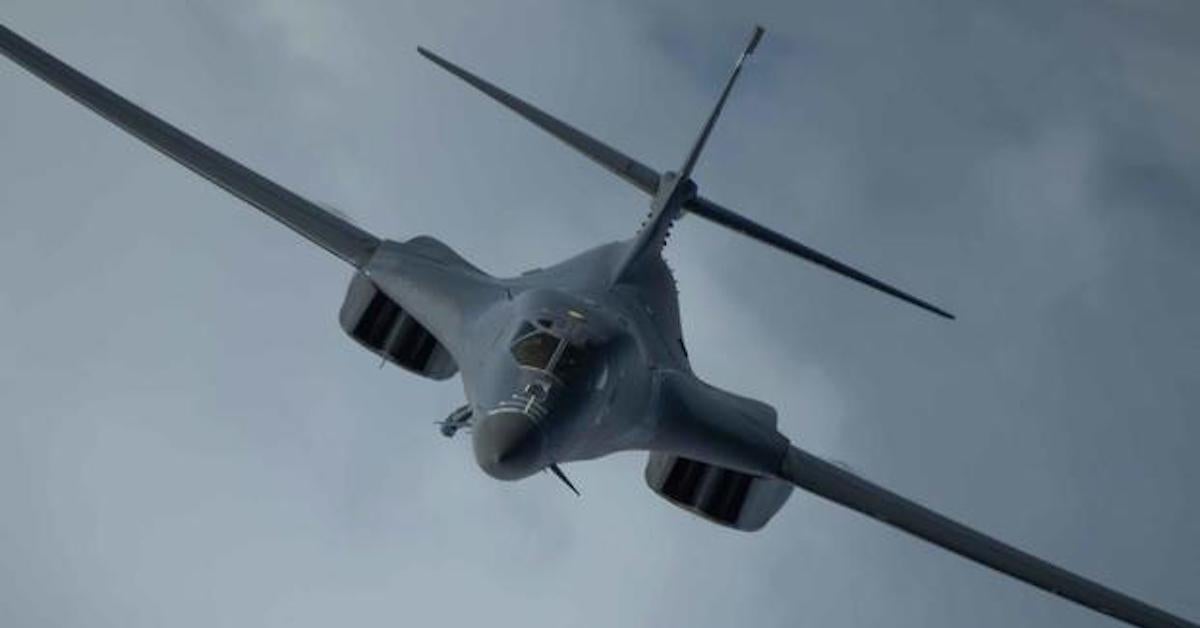 The U.S. Air Force just proved it can externally mount an advanced stealth cruise missile on the B-1B Lancer for the first time, a step forward in plans to have the B-1 carry future ordnance — like hypersonic missiles — outside of its internal bomb bay.

In the demonstration, carried out by Air Force Materiel Command and Boeing Co., the B-1 carried an inert AGM-158 Joint Air-to-Surface Standoff Missile, known as JASSM, on an external pylon. Then, the aircraft demonstrated its “ability to safely release” a mounted AGM-158 separation test vehicle, according to Air Force Global Strike Command spokesman Lt. Col. David Faggard.

“The captive-carry event is actually not a test, but a demonstration to revalidate the previously dormant external carry capability pre-existing on the B-1,” Faggard told Military.com. “No major modifications were needed.”

He added, “This demonstration may pave the way possibly for the B-1B to carry hypersonic weapons externally.”

“Adapting a small number of our healthiest B-1s to carry hypersonic weapons is vital to bridge between the bomber force we have today, to the force of tomorrow,” Gen. Tim Ray, head of AFGSC, said in a statement.

Service officials said the demo does not affect its request to retire 17 B-1B bombers in 2021, reducing the fleet to just 44 aircraft in order to better sustain the most viable planes. The service plans to retire the entire fleet by 2036.

Earlier this year, the House Armed Services Seapower and Projection Forces subcommittee said it would allow the bomber retirements as long as the service keeps 24 combat-coded aircraft; lawmakers previously demanded the service keep at least 36 bombers always ready for combat.

“My goal is to have a limited number of B-1s modified to become the roving linebacker of the western Pacific and the North Atlantic,” Ray said.

Some of those missions are already underway: This year, B-1s have been spotted conducting multiple high-visibility patrols in these regions, most notably across the East and South China Seas. In May, bombers from Ellsworth Air Force Base, South Dakota, also held their first-ever training mission over Sweden near the Arctic.

The weapons’ trial “is a true testament to the engineering and operations’ teams who took this idea from concept to rapid test in a short amount of time,” Ray added. He has previously advocated steps to make the remaining bombers even more lethal.

“This is a major step forward in our global precision fires capability and it is important we pursue these technologies to remain ahead of our competitors,” he said.

The external hardpoints on the B-1B were once built to carry nuclear-tipped cruise missiles — a mission the long-range aircraft no longer has. The conversion process to make the B-1 non-nuclear began under the Strategic Arms Reduction Treaty, with the final conversion taking place in 2011.

While the external carriage demonstration reactivates the original design and inherent capability, the aircraft “will remain treaty-compliant,” Faggard said. “The expanded capabilities will be conventional-only,” he said.

If the Air Force pursues permanent modifications, the B-1’s hard points would be reconfigured to carry modern conventional weapons and the right-forward hardpoint that currently supports the targeting pod pylon — a tracking device used for target detection and identification — that has been in operational use for the past 15 years, Faggard said.

Kingston Reif, the director of disarmament & threat reduction policy at the Arms Control Association, pointed out the Air Force has publicized increasing the B-1’s weapons’ payload — particularly with JASSM — for months now.

“This would not violate the treaty because the bomber is still only carrying conventional weapons,” Reif said Tuesday. “They’re not reinserting the electronics that would be required to make the bomber nuclear-capable, or to carry nuclear weapons.”

He added, “They’re doing something to reverse what they’ve previously done, but that doesn’t mean it’s a violation of the treaty.”

The variable sweep-wing aircraft is capable of carrying both precision-guided and conventional bombs.

During the Syria strike in 2018, the B-1 struck targets using 19 JASSMs, marking the first operational use of any variant of the missile (the standard JASSM-A missile variant was used, not the new extended-range variant, known as JASSM-ER).

In August 2019, the Air Force proved it could transform the Lancer to hold more ordnance, a first step toward carrying hypersonic weapons payloads. The test, also conducted by Edward’s 419th Flight Test Squadron, demonstrated that crews could fasten new racks onto the B-1’s external hardpoints as well as reconfigure its internal bomb bays to hold heavier weapons.

The B-1 is also capable of carrying the Long Range Anti-Ship Missile, or LRASM. A single B-1B can carry up to 24 LRASMs; the Navy missile, which can autonomously locate and track targets while avoiding friendly forces, achieved early operational capability on the bomber in 2018.

The current initiative enables the B-1 “to carry 24 JASSMs [and or] LRASMs internally with 6 to 12 weapons externally,” Faggard said. The proposed increase means that two bombers would equal three bombers’ worth of weapons, he said.

The trial also determined that the B-1 can still carry a full, internal weapons complement even if JASSMs are positioned outside the bomb bay, Faggard said. Furthermore, the B-1 is able to employ internal weapons “without expending external weapons first,” he said.

Engineers are now reviewing the data collected during the Nov. 20 flight before the service moves on to the next phase of the demonstration: an external weapons release, Faggard said.

“This extensive engineering review will help the Air Force understand areas where we need to focus in order to maintain the B-1B as a multi-mission weapon system, potentially laying the groundwork for integration of future weapons on the aircraft,” he said.