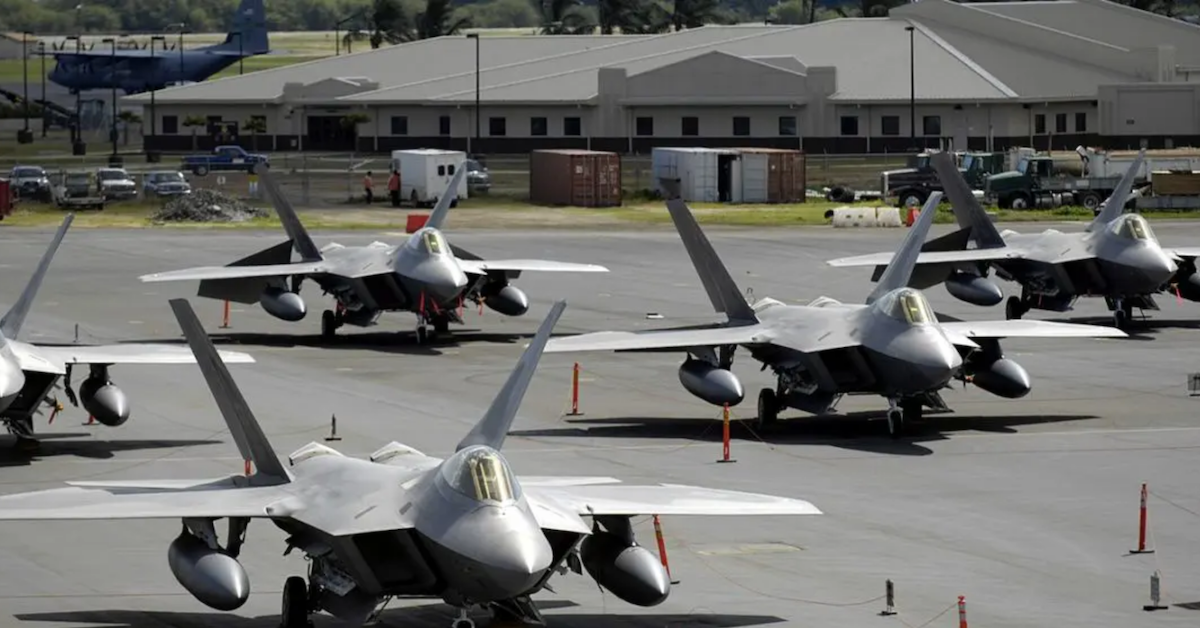 On Saturday, the Times of Israel reported that President Donald Trump had approved the sale of Lockheed Martin F-22 Raptors, America’s most capable air superiority fighter, to Israel. According to reports, the intent behind this potential sale is to help enable Israel to maintain the military edge within the Middle East, after the United States agreed to sell F-35 Joint Strike Fighters to the United Arab Emirates. On paper, this sale can’t (or won’t) happen until after Congress changes a law barring the sale of the F-22 Raptor to other nations, but the truth is, there’s a far more practical roadblock standing between Israel and a new fleet of Raptors: Nobody can make them.

While the F-35 Joint Strike Fighter is widely seen as the most technologically advanced fighter in the sky, it was designed as a sort of continuation of the F-16 Fighting Falcon’s multi-purpose architecture, with an emphasis placed on conducting air-to-ground operations. The older F-22 Raptor was intended to serve as a replacement instead for the legendary F-15 Eagle as the nation’s top-of-the-line dogfighter.

While both the F-22 and F-35 are 5th generation jets that leverage stealth to enable mission accomplishment and both are able to conduct air-to-air and air-to-ground combat operations, they each specialize in a different aspect of air combat and were intended to serve in very different roles. Israel already operates a number of F-35s, and in fact, was the first nation to put the new jet in combat, edging out the U.S. Marine Corps by a matter of months.

This isn’t the first time Israel has gone after the F-22 Raptor, which was the world’s first operational stealth fighter and remains America’s most capable intercept and air superiority platform. Just prior to leaving office in 2001, President Bill Clinton suggested that he would be in favor of selling the advanced fighter to Israel, but he ultimately left that decision up to his successor, George H.W. Bush. A few short months after taking office, the terror attacks of September 11, 2001, shifted President Bush’s attention and priorities to the burgeoning war on terror, seemingly disregarding the potential F-22 sale.

Even if President Bush had wanted to sell the fighter to Israel in 2001, he would have had to address the 1998 “Obey Amendment” passed by Congress that specifically barred the sale of the F-22 to Isreal, citing concerns that such an exchange would result in China gaining access to the fighter. Although Israel and the United States have long enjoyed strong ties, the U.S. has Israel to blame for giving China access to the F-16 Fighting Falcon in the late 1980s, which resulted in China’s fielding their own copy of the fighter in their highly capable Chengdu J-10.

In order to sell Israel the F-22 as a result, Congress would need to pass legislation to allow it… but that challenge pales in comparison to the logistical challenges Lockheed Martin would face in trying to re-start F-22 production.

Today, the F-22 exists in precious few numbers, despite its reputation as the best air superiority fighter on the planet. The Air Force originally intended to purchase 750 F-22s to develop a robust fleet of stealth interceptors, but the program was prematurely canceled with just 186 fighters delivered. As the United States found itself further entrenched in counter-terror and counter-insurgency operations against technologically inferior opponents, the need for advanced dogfighters became less pressing. As a result, the F-22 program came to a close in December of 2011.

Even the United States faces concerns about its own dwindling fleet of F-22 Raptors here in 2020. Only around 130 of the 186 F-22s Lockheed built were ever operational, and today the number of combat-ready F-22s is likely in the double digits. It’s extremely unlikely that the U.S. Air Force would be willing to part with any of their own F-22s to fill an Israeli order, so there would be no choice but to build new F-22s to complete such a sale.

As simple as just building more may sound, the truth is, re-starting the F-22 production line would likely cost the same or potentially even more than simply developing an entirely new and potentially better fighter. Lockheed Martin cannibalized a great deal of the F-22’s production infrastructure to support the ongoing production of the F-35, meaning it wouldn’t be as simple as just re-opening the plants that had previously built Raptors.

In fact, Lockheed Martin would have to approach building new F-22s as though it was an entirely new enterprise, which is precisely why the United States didn’t look into purchasing new F-22s rather than the controversial new (old) F-15EX.

Boeing’s new F-15s are considered fourth-generation fighters that are sorely lacking in stealth when compared to advanced fighters like the F-22 and F-35, but the Air Force has agreed to purchase new F-15s at a per-unit price that even exceeds new F-35 orders. Why? There are a number of reasons, but chief among them are operational costs (the F-15 is far cheaper per flight hour than either the F-35 or the F-22), and immediate production capability. Boeing has already been building advanced F-15s for American allies in nations like Qatar and Saudi Arabia, so standing up a new production line for the United States comes with relatively little cost.

The F-22’s production line, on the other hand, hasn’t existed in nearly a decade. In a report submitted to Congress in 2017, it was estimated that restarting F-22 production would cost the United States $50 billion, just to procure 194 more fighters. That breaks down to between $206 and $216 million per fighter, as compared to the F-35’s current price of around $80 million per airframe and the F-15EX’s per-unit price of approximately $88 million.

Does that mean it’s impossible to build new F-22s? Of course not. With enough money, anything is possible — but as estimated costs rise, the question becomes: Is it practical? And the answer to that question seems to be an emphatic no. The U.S. Air Force has invested a comparatively tiny $9 billion into its own Next Generation Air Dominance fighter program — aimed at developing a replacement for the F-22 — over the span of six years (2019-2025).

If Israel were willing to put up $50 billion to procure new F-22s, it would almost certainly be better off devoting that sum to developing a new air superiority fighter. The F-22, after all, first took flight all the way back in 1997. It may still be the best fighter around, but as the United States and its competitors continue to tease the new 6th generation of fighters, why would anyone want to invest so heavily in a design that would be thirty years old before the first of a new batch of fighters could roll off the assembly line?

If 2020 has taught any lessons, one of them must be that anything’s possible… but there doesn’t seem to be any logical process that leads to new F-22s being built anywhere, let alone any Raptors finding their way into Israeli hangars.