Memphis Belle: The legendary B-17 flying fortress - We Are The Mighty 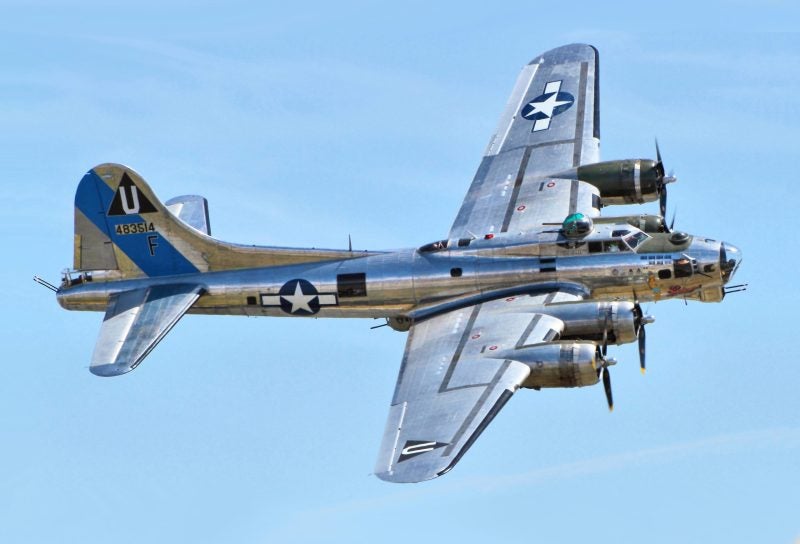 The “Memphis Belle” a B-17F Flying Fortress of the Eighth Air Force would become the most famous of the 12,750 B-17s produced by Boeing during World War II. The plane and her crew would become immortalized, first by the Army who filmed her crew for a documentary prior to a War Bond tour and later by Hollywood who made a fictionalized feature film on the exploits of her crew.

The casualty rates were so high, that the United States put a 25-mission limit on crews. If a crew flew 25 combat missions and survived, they were rotated back to the states. But none of the crews were surviving that long. The Memphis Belle was one of the first to do so.

The air war for the United States in 1942 and early 1943 was a bloody affair. The United States had entered the war just months before, and Britain decided to pressure the German war machine by bombing it around the clock. The British would bomb at night, the Americans by day.

The Allies didn’t yet have fighters that had the range to escort the bombers to their targets and back. The German Luftwaffe was a formidable adversary with very experienced fighter crews. The German anti-aircraft artillery which they called “Flak” was accurate and plentiful.

In the early days of daylight bombing, the Germans exacted a terrible toll on the new American formations. Casualty rates were appalling. It was here that Captain Robert Morgan and his crew would step into the war.

B-17F 10-BO, manufacturer’s serial number 3470, USAAC Serial No. 41-24485, was added to the USAAF inventory on July 15, 1942, and delivered in September 1942 to the 91st Bombardment Group at Dow Field, Bangor, Maine. The aircraft was deployed to Prestwick, Scotland, on September 30, 1942,  and stationed at a temporary base at RAF Kimbolton on October 1, and then finally to her permanent base at RAF Bassingbourn, England, on the 14th of October.

The marking on the sides of the fuselage bore the unit and aircraft identification markings of a B-17 of the 324th Bomb Squadron (Heavy); the squadron code “DF” and individual aircraft letter “A.”Read Next: The Eighth Air Force, “The Mighty Eighth” Was Born on This Day 1942

Morgan decided to name the plane after his sweetheart back home, a woman named Margaret Polk from Memphis, TN. Originally the plane would be named after Morgan’s nickname for Polk, which was “Little One” but after he and co-pilot Jim Vennis saw a film where the main character had a riverboat named the “Memphis Belle”, the name stuck. Morgan brought it up to the crew and they voted for it.

The drawing on the fuselage was from a pinup by artist George Petty that was in Esquire magazine in April of 1941 issue. Corporal Tony Starcer, copied the Petty girl pinup on both sides of the forward fuselage, depicting her bathing suit in blue on the aircraft’s port side and in red on the starboard. The Memphis Belle was born.

Morgan and his crew flew their first mission over Europe on November 7, 1942, at Brest, France. The command of the American Air Forces and the Pentagon set the incentive of 25 missions for crews to reach to be rotated back to the United States. But no one was reaching that threshold. Casualties among the bomber crews in those early dark days were at 80 percent.

In interviews much later, Morgan summed up the horror of the early days of the airwar in describing the awful casualties suffered by American aircrews in the first days of the bombing campaign.

“Eighty-percent losses means you have breakfast with 10 men and dinner with only two of them.”

Memphis Belle had her share of difficult scrapes with German fighter planes and flak and on five different occasions had an engine shot out. Another time, a diving German Focke Wulf  Fw-190 came straight at the plane and riddled the tail with holes setting it on fire. After the fire was out, Morgan climbed back into the tail to survey the damage.

His comments, captured by History.net tell of the difficulty he had in bringing the ship back safely. “It looked like we had no tail at all,” Morgan said. “I got back in the cockpit and flew back to the base in two hours. It was tough flying, and tougher than that to set her down. The elevators were damaged so badly that the controls jammed. Somehow we managed to get down safely.”

The American bomb groups were taking on tough, well-defended targets including the Focke Wulf plant at Bremen, locks and submarine pens at St. Nazaire and Brest, docks, and shipbuilding installations at Wilhelmshaven, railroad yards at Rouen, submarine pens and powerhouses at Lorient and aircraft factories at Antwerp.Read Next: The Australian Army Chief Got it Wrong…Bring Back the Punisher

During her 25 missions, Memphis Belle gunners were credited with shooting down eight German fighters with another five probable kills. They damaged 12 more fighters and dropped over 60 tons of bombs on the German war machine.

After their 25th mission, the crew which had been the subject of a war documentary by Hollywood director William Wyler, the crew was rotated home on a 31-city war bond tour. The men were treated as heroes wherever they stopped. Only one female was ever allowed to fly with the Belle. Stuka, a Scottish terrier bought by co-pilot Jim Vennis in England accompanied the crew and was spoiled with the rest of the crew.

One of the stops was in Memphis where Polk was in attendance, although interestingly enough the two never did marry but did remain life-long friends. Morgan put on a stunt at his own hometown of Asheville, NC where he flew the Fortress down the main drag in town and turned it between two large buildings on its side.

General Henry “Hap” Arnold, gave Morgan the choice of any assignment he wanted. He chose to transition to B-29 bombers and bomb the Japanese. He took part in the first raid on Tokyo in November of 1944. After flying 50 missions he was sent home for good. He remained in the Air Force and retired as a Colonel.

Memphis Belle Not the First to Complete 25 Missions

Unlike the feature film that came out in 1990, the Belle was not the first plane to fly 25 missions in Europe. That distinction belonged to Captain Irl Baldwin of the 303rd Bomb Group and the plane “Hell’s Angels” named after a Howard Hughes, Jean Harlow film from back in the day. Baldwin completed his 25 missions a week before Morgan did. Memphis Belle was the first to complete 25 missions and return to the United States. Baldwin and his crew would go on to fly 48 missions before returning to the U.S. for their own bond tour in 1944.

I met Baldwin at the Mighty Eighth Air Force Museum in Savannah, GA a few years before he passed away. And in talking to him, you got a great sense of how difficult life was for those bomber crews over Europe.

Asked which was worse, the fighters or flak he smiled and answered…”Yes!” He said, “it didn’t matter how large the group was when those German fighters were coming head-on into the group, you’d swear to God every one of them was firing at you.”

He added, “Once they’d open up it looked like they were winking at you and the next thing was those cannon shells ripping past.”

I asked how he managed to survive 48 missions where so many didn’t last long at all.

“Some of it is pure luck,” he said. “There is nothing you can do about flak and those German gunners were good. They’d get your range and it looked like you could walk from burst to burst with touching thin air.”

“But the other thing we learned right away was that we had to be better pilots. The only way we could survive the fighters was fly wingtip to wingtip. That way all of our guns could be trained as one. If the Germans could get in between the bombers of the group, and they were some great pilots, they’d cut you to pieces.”

Baldwin too transitioned to B-29s after his War Bond tour. But he never got the chance to fly in combat over Japan. “Right after I got there, we dropped the bomb,” he said with a shrug. “I got there a few days too late.”

Asked why he’d volunteer after already flying so many combat missions, he shrugged again. “We were at war and I felt I was better suited for it than other guys.”

“Besides,” he added, “ I figured the Germans were the best we’d go against. If they couldn’t get me I didn’t think the Japs could.”

This article was originally published on May 17th, 2020.