The Navy’s insane vertical take-off fighters of the 1950s 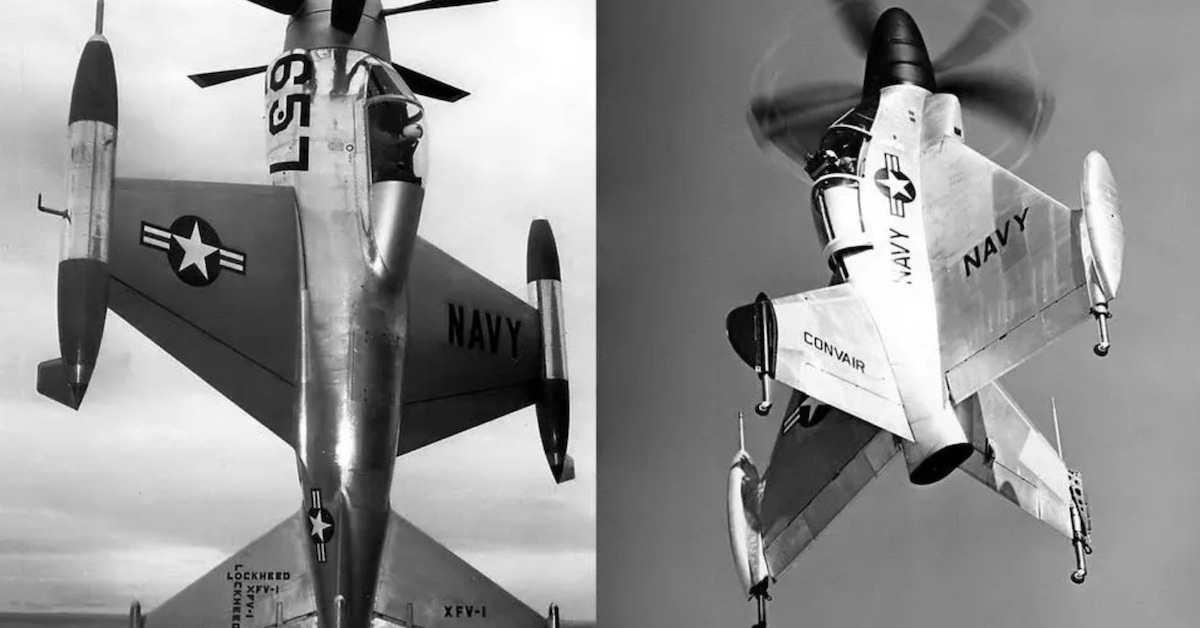 Nearly two decades before the Harrier jump jet would prove the efficacy of vertical take-off and landing platforms, the U.S. Navy considered taking another approach to fielding fighters without a runway.

In the years immediately following World War II, the United States found itself trying to adapt its newfound airpower to a world with nuclear weapons in it. America knew its monopoly on atomic bombs wouldn’t last forever, and by the mid 1940s, it seemed clear that the Soviet Union would eventually become the planet’s second nuclear power.

That day came sooner than many expected, when a nuclear detonation at the Semipalatinsk test site in modern-day Kazakhstan on August 29, 1949, ushered in an era of military competition between global powers. In just a few short decades, the combined nuclear weapon stockpile of the U.S. and Soviet Union exceeded 70,000. The doctrine of Mutually Assured Destruction tends to be discussed in terms of just the U.S. and Soviets these days, but with stockpiles that large, it was truly the world that hung in the balance as these two superpowers stared one another down from their respective hemispheres.

Nuclear war and the need for VTOL aircraft

For some time, nuclear war seemed not only possible, but even likely, as the two nations postured for territory and prestige. Within some defense circles, the question really wasn’t if a nuclear war would break out… but when.

The fact that just 21 years passed between the conclusion of World War I and the onset of World War II is an important piece of context to consider when looking back at the decades immediately following that second great conflict. Military leaders in both nations were largely old enough to have seen not one, but two world wars, each setting a new precedent for war’s horrific destructive capacity. World War III wasn’t a hypothetical concept for much of the world as it is today. World War III seemed like a very real and potentially likely scenario, and the one thing both sides were certain of was that the next global conflict would start the same way the last one had ended: With nuclear weapons.

While America’s politicians largely saw the concept of nuclear war as the end state of a diplomatic failure, America’s military leaders were stuck in the unenviable position of having to plan to fight and win such a war. That meant finding ways to stay in the fight after the first nukes made landfall, and one way that manifested in a number of military aircraft development programs was the concept of VTOL, or Vertical Take-Off and Landing.

Throughout World War II, the world saw an explosion of aviation infrastructure development, as landing strips popped up in every region of the fight. These airstrips throughout Europe and the Pacific would almost certainly be seen as an imposing threat to the Soviets in a new conflict, as they would provide America and its allies with ample opportunity to launch heavy payload bombers deep into Soviet territory.

As a result, Pentagon brass believed airstrips would be among the first targets of a Soviet nuclear attack. If they were right and the U.S. couldn’t count on having airstrips positioned around the globe to support combat operations, they needed a new fighter that could take off and land without the need for a well-manicured runway.

The U.S. Air Force considered the Canadian flying saucer known as the VZ-9 Avrocar. The U.S. Navy sought their own solution, and by 1950, they had received proposals from both Lockheed and Convair.

While the need for VTOL aircraft was seen all across the Pentagon, the Navy saw vertical take-off and landing platforms as an opportunity to deploy intercept fighters from non-aircraft carrier vessels. In fact, the Navy even considered launching VTOL fighters off of merchant ships in a new World War if necessary.

In June of 1951, Lockheed was awarded a Navy contract to build the XFV-1; a prototype fighter with traditional wings, a massive reinforced X-shaped tail, and a 5,850 horsepower turboprop engine spinning a pair of three-bladed contra-rotating propellers that made the aircraft look like the bastard child of a helicopter and a prop-driven fighter. Most unusual of all, the aircraft was designed to take off and land on its tail, with its nose pointed straight up in the air.

Lockheed called on famed aviation pioneer Kelly Johnson to design their VTOL XFV, and one could have argued at the time that the program couldn’t have been placed in better hands. Johnson was just coming off of the development of the P-38 Lightning and then America’s first jet fighter, the P-80 Shooting Star. His long and storied career as an aeronautical engineer eventually included overseeing first of their kind platforms like the U-2 Spy Plane, the SR-71 Blackbird, and the F-117 Nighthawk.

For testing, the XFV-1 was fitted with an awkward-looking set of landing gear, which included mounting wheels on the bottom of the lower tail wings. In December of 1953, the XFV-1 got its first taste of the sky when Chief Test Pilot Herman ‘Fish’ Salmon managed to make the aircraft “hop” briefly during taxing tests. Less than a year later, in June of 1954, it would make it all the way into the sky for its first real flight.

Unfortunately, the Allison YT40-A-6 turboprop engine installed on the prototype was not powerful enough to manage actual vertical take-offs or landings. Instead, Lockheed planned to use the forthcoming (and more powerful) Allison T54 engine, which would produce 7,100 horsepower, but issues with the engine’s development meant the XFV’s desperately needed power plant would never arrive.

The prototype XFV-1 did make a total of 32 brief flights and even managed to hover with its nose up for a short period of time, but never accomplished a single vertical take-off or landing.

Convair’s take on the vertical take-off and landing premise shared a number of similarities with Lockheed’s. Like the XFV, Convair’s XFY Pogo was designed to sit upright on its tail so it could leverage its pair of three-bladed contra-rotating propellers to take off like a helicopter. Then, once in the air, the aircraft would re-orient itself to fly forward like a traditionally prop-driven plane.

For its purposes, the Pogo was more successful than Lockheed’s outing. The first outdoor test flights began in August of 1954, and a series of 70 successful vertical take-off and landing drills following shortly thereafter. By November of that year, the team at Convair with test pilot and Marine reservist, Lieutenant Colonel James F. “Skeets” Coleman at the stick, achieved their first successful transition from vertical flight to horizontal. In order to make the transition easier, the pilot’s seat within the cockpit was mounted on gimbals that oriented the pilot at 45 degrees in vertical flight mode and 90 degrees when flying horizontally.

Despite its successes, subsequent test flights began to reveal problems with the VTOL upright fighter’s very premise. While flying, the Pogo lacked airbrakes or spoilers to help it slow down after high-speed flight, but more troubling was just how difficult landing the unusual aircraft could be. Pilots had to look over their shoulder and back to the ground as they slowly lowered the fighter down onto its tail. Eventually, a low-power radar system was installed that would help the pilot gauge their altitude with a series of lights, but landing was still risky. It quickly became apparent that the Navy’s plan to put these fighters on a wide variety of non-carrier vessels just wouldn’t work, because only the best pilots in the force had a chance at landing the plane.

Ultimately, the U.S. Navy would invest heavily into fixed-wing and sweep-wing carrier-based fighters like the F9F Panther, the F-14 Tomcat, and the F/A-18 Hornet. However, vertical or short take-off fighters did still find their way into America’s arsenal. The U.S. Marines began flying the AV-8A Harrier in 1971, and today, Marines are experimenting with using amphibious assault ships to launch sorties of the short take-off, vertical landing variant of the Joint Strike Fighter, the F-35B.