Sea Raptor: The Navy’s sweep-wing F-22 that wasn’t to be - We Are The Mighty

Sea Raptor: The Navy’s sweep-wing F-22 that wasn’t to be 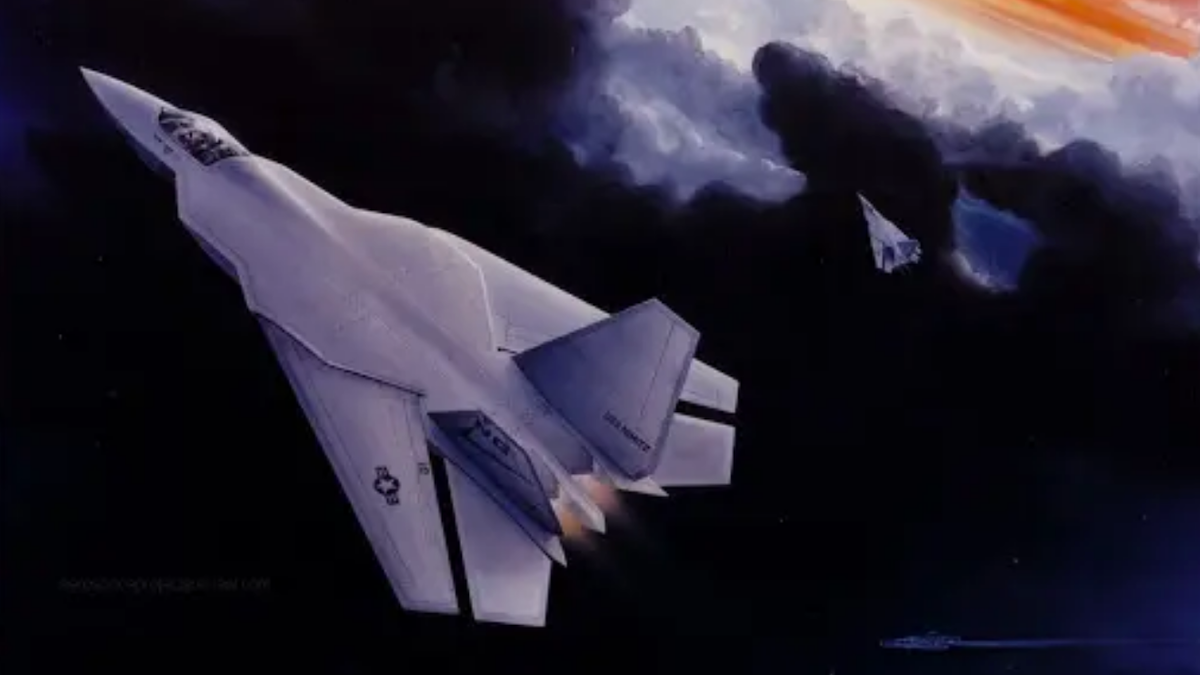 The U.S. Air Force’s venerable F-22 Raptor is widely seen as the world’s most capable air superiority fighter, but for a short time, it was nearly joined by a sister platform modified specifically for the Navy in the NATF-22.

The Lockheed Martin F-22 Raptor came about as a result of the U.S. Air Force’s Advanced Tactical Fighter program that aimed to field an all-new aircraft that could not only compete with advanced Soviet jets like the Sukhoi Su-27 and Mikoyan MiG-29, but dominate them. The Su-27 and MiG-29 had both been developed with America’s F-15 Eagle and F-16 Fighting Falcon squarely in their sights, and although the Soviet Union was on its last leg by the late 1980s, the Air Force remained steadfast in their need for a new generation of fighter.

Ultimately, the F-22 Raptor won out over its (arguably more capable) Northrop YF-23 competition, thanks in no small part to Lockheed’s flair for dramatic presentations and Northrop’s troubled reputation at the time. While the YF-23 boasted better range and stealth, the YF-22 and its operational F-22 successor offered a combination of solid capability and Lockheed Martin’s reputation for delivering highly capable military aircraft. While the YF-22 ultimately won the decision, either aircraft would have gone on to become the world’s first stealth fighter, establishing a new generation of fighters to come. Had the YF-23 won out, it would have been the defacto choice for a Navy fighter variant for consideration.

While some still contend that an F-23 could have been the superior fighter, the F-22 quickly separated itself from its operational competition thanks to a combination of low observability, high speed, and acrobatic performance. The Raptor was not only able to reach and sustain speeds as high as Mach 2.25, it also offered the ability to “supercruise,” or to maintain supersonic speeds without the use of the afterburners on its pair of Pratt & Whitney F119-PW-100 augmented turbofans. The thrust pouring out of those engines was managed by the aircraft’s Thrust Vector Control surfaces, which allowed the pilot to orient the outflow of the engines independent of the direction the aircraft was pointed. In other words, an F-22 pilot can point its nose (and weapons) down at you while it continues to push forward through the sky.

The F-22 proved so capable, in fact, that Congress pressed the Navy to consider adopting a sweep-wing version of the new fighter under the NATF (Naval Advanced Tactical Fighter) program that began in 1988. In return for the Navy considering the NATF as a potentially lower-cost alternative to developing their own replacement carrier-based fighter, the U.S. Air Force agreed to evaluate a modified version of the carrier-based stealth bomber being developed under the Navy’s Advanced Tactical Aircraft (ATA) program as a replacement for their own aging F-111.

In theory, this agreement would allow the Air Force to leverage Navy R&D for their new bomber, while the Navy leveraged the Air Force’s for their new fighter. This approach to sharing development costs across branches, one could argue, would reach its zenith when multiple combat aircraft programs across the Navy, Air Force, and Marines were merged to create what would go on to become the (incredibly expensive) F-35 Joint Strike Fighter program.

Related: AN F-35 PILOT EXPLAINS WHY THE JET’S BAD PRESS MISSES THE POINT

In a prelude of things to come, the NATF program, and its associated plans for an NATF-22, were soon seen as prohibitively expensive. By 1990, some seven years before the F-22 would first take to the sky, Admiral Richard Dunleavy, the man responsible for outlining the Navy’s requirements for a new fighter, was quoted as saying that he didn’t see any way the F-22 could be incorporated into an affordable plan for Naval aviation. As a result, the NATF-22 concept was dropped in early 1991.

Had the U.S. Navy opted to pursue a carrier-capable variant of the F-22, there would have been a number of significant technical hurdles to overcome. Aircraft designed for carrier operations have to manage a very different set of take-off and landing challenges than their land-based counterparts. The aircraft fuselage needs to be more physically robust to withstand the incredible forces applied to it during catapult launches and short-distance landings supported by a tailhook at the rear of the aircraft. The NATF-22 would also have to leverage the same sort of variable-sweep wing approach found on the F-14 to grant the aircraft the ability to fly slowly enough to safely land aboard a carrier.

That variable-sweep wing design itself brought a slew of its own problems engineers would need to solve. First and foremost, the Navy was already dealing with the high cost of maintaining the sweep wing apparatus on the F-14 Tomcat. A new sweep wing design likely wouldn’t alleviate the high operational costs associated with the Tomcat. As the Air Force has gone on to prove, the Navy’s decision was probably right. Even with fixed wings, the F-22 remains one of the most expensive fighter platforms to operate.

It also stands to reason that the variable sweep wing design would compromise some degree of the aircraft’s stealth. If the connecting surfaces of the moveable wings produced a high enough return on radar to secure a weapons grade lock on the aircraft, the value of such a fighter would be fundamentally compromised. The F-22 may be fast and maneuverable, but the Navy’s existing F-14 Tomcats were faster — and despite their high maintenance costs, still significantly cheaper than building a new stealth fighter for the Navy’s flattops, even if it was borrowing heavily from the Air Force’s program.

At the end of the day, it’s easy to see why the U.S. Navy opted not to pursue the NATF-22. It was complicated, expensive, and may have only offered a slight improvement over the Navy’s existing carrier-based platforms if any at all. But, nonsensical as it may be in practical use, the very concept of a variable-sweep wing F-22 carrying on the legacy of the fan-favorite F-14 Tomcat aboard America’s super carriers is just too cool not to look back on a bit wistfully.

After all, with only 186 F-22 Raptors ever rolling out of Lockheed Martin’s factories, this king of sky combat is destined to have a painfully short reign. One has to wonder… could a Navy variant of the F-22 have been enough to save this program from the budgetary ax?

The truth is, probably not — but the pictures sure are cool to look at.