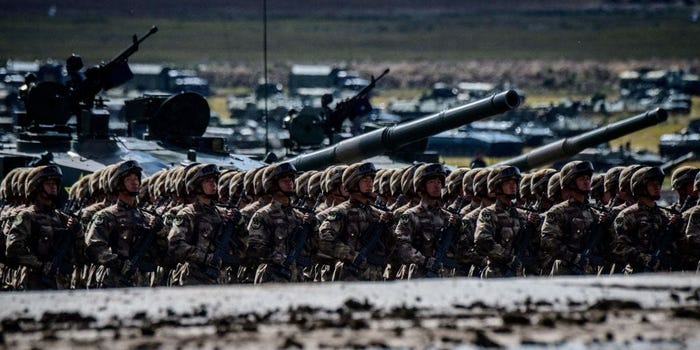 Chinese media recently released a video of a really intense military training exercise in which a 40-ton armored vehicle drives over troops laying on the ground, with the vehicle tracks passing dangerously close to the heads of the Chinese soldiers.

The Chinese-language Global Times posted the video last week, noting that the source was Chinese state broadcaster CCTV. The video has since made the rounds on social media.https://www.youtube.com/embed/IkU-FZ2eLJ4

An unspecified People’s Liberation Army (PLA) brigade in the Southern Theater Command conducted a trust exercise in which the troops demonstrated the faith in their armored vehicle drivers by literally putting their lives on the line.

At the start of the video, an officer asks the soldiers: “Do you have confidence in the soldier beside you?” After shouting back “yes,” one soldier departs to climb aboard the armored vehicle as the others drop to the ground, awaiting their fellow soldier to run over them.

The tracked armored vehicle in the video looks like the HQ-17 surface-to-air missile transporter erector launcher. The HQ-17, which was publicly revealed in 2015, is a reverse-engineered Chinese variant of the Russian Tor-M1 system.

In two other related videos, soldiers involved in the demonstration talk about their experience. One soldier on the ground says he was “really nervous.”

Another Chinese soldier described the training exercise as a test of the armored vehicle driver’s skills and character, as well as an opportunity to boost trust and confidence between soldiers.

The exercise is unusual in that it has troops lying sideways, putting them at greater risk, but it is certainly not the first time China has had armored vehicles drive over troops in training.

A series of photos from last September posted on the official website of the Chinese military shows tanks and other vehicles running over troops in Xinjiang as part of a psychological training exercise intended to strengthen their resolve.

Similar exercises have also been conducted in other countries.

In October, as The Drive reported at the time, Finland’s Jaeger Brigade, known as the Jääkäriprikaati, released videos of a German-made Leopard 2A4 tank driving over troops in the snow.

The aim of the exercise was to help troops combat “tank terror,” which is the fear of encountering an armored vehicle on the battlefield.