Members of the US Coast Guard, US Navy, US Customs and Border Patrol, as well as the Colombian navy, intercepted a go-fast boat laden with cocaine in the eastern Pacific Ocean in early April 2018.

The various forces fought a fire on the smuggling vessel before off-loading more than 1,000 pounds of cocaine.

A CBP Air and Marine Operations P-3 patrol aircraft spotted the boat, technically called a low-profile go-fast vessel, in the waters of the eastern Pacific on April 7, 2018. Go-fast boats are specially made vessels, typically made of fiberglass, designed to carry large quantities of drugs with a low surface profile, which helps them avoid visual or radar detection.

The crew on the P-3 reported the go-fast boat to the Joint Interagency Task Force-South, which directed the crew of the US Navy coastal patrol ship USS Zephyr to make an intercept.

After spotting the Zephyr, the crew of the go-fast boat began to throw their cargo overboard. They then jumped overboard themselves when their boat caught fire. 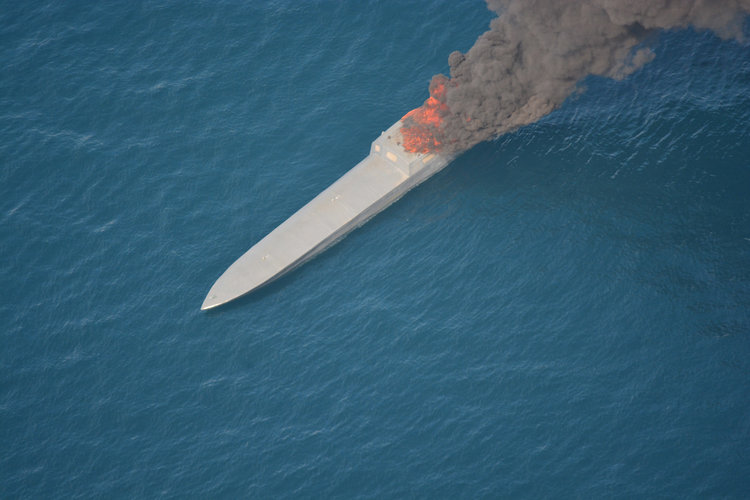 A US Coast Guard law-enforcement team launched from the Zephyr caught up with the go-fast boat and rescued four suspected smugglers. Coast Guard and Navy personnel then fought the fire aboard the suspected smuggling vessel, extinguishing it in about 90 minutes, according to a Coast Guard release.

Coast Guard personnel and other US law-enforcement personnel were then able to recover about 1,080 pounds of what is believed to be cocaine. The Colombian navy ship 07 de Agosto arrived during the recovery to assist with documenting the case. The go-fast boat, which was severely damaged, was intentionally sunk.

“There was no doubt in our minds what needed to be done to salvage the evidence needed for a successful prosecution even if it meant laying Zephyr alongside a burning hull, with the intense heat and acrid smoke hindering our 90-minute firefight,” Lt. Cmdr. Grant Greenwell, commanding officer of the Zephyr, said in the release.

The waters of the Pacific along South and Central America have become a particularly busy venue for traffickers.

Colombia, the only South American country with both Pacific and Atlantic coastlines, is the world’s largest producer of coca, the base ingredient for cocaine. (Bolivia and Peru are the only other major producers.) 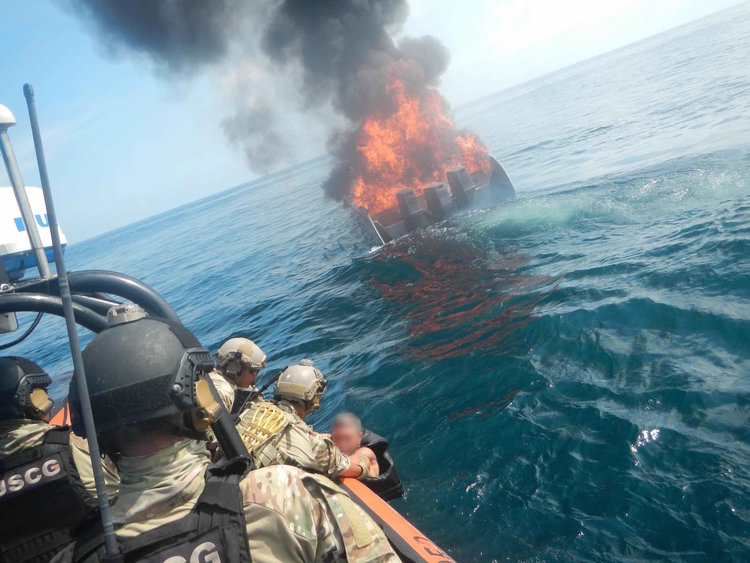 Traffickers typically launch from secluded areas on the Pacific coast in Colombia, Ecuador, or Peru and head north. Limited government presence and corruption allow traffickers and criminal groups to operate with relative freedom in these areas, particularly in the coastal areas and inland waterways in western Colombia.

In recent years, trafficking routes have moved farther out, sometimes going around the Galapagos Islands, likely to avoid detection in waters closer to shore.

“During at-sea interdictions in international waters, a suspect vessel is initially located and tracked by US and allied, military or law enforcement personnel,” the Coast Guard said in its release. “The interdictions, including the actual boardings, are conducted by Coast Guard members.”

The cargoes that make it through are typically off-loaded somewhere in Central America — Coast Rica in particular has become a busy drug-transit hub— and then they’re moved up the coast via another ship or overland through Central America and Mexico toward the US border.

More than 90% of the cocaine that makes it to the US comes through the Central America/Mexico corridor, though there are signs that traffickers are trying to increase production in Central America itself. 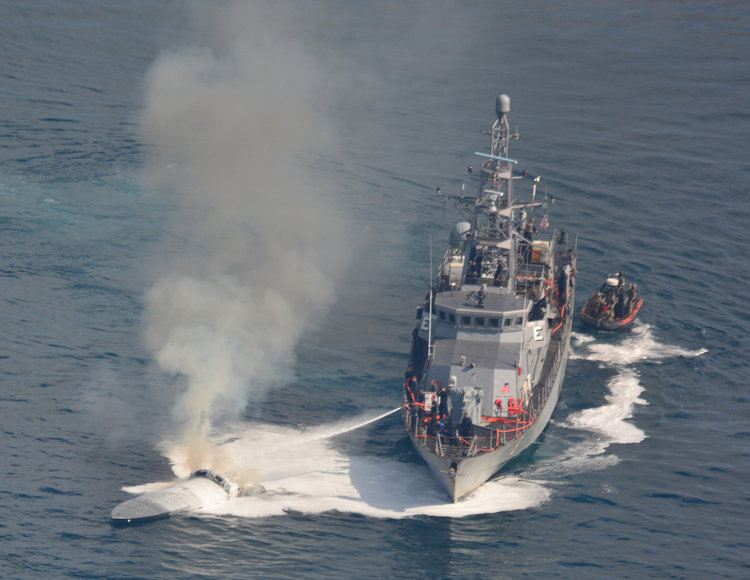 The US and international partners have stepped up their operations in the Pacific Ocean and Caribbean Sea, including Operation Martillo, a US, European, and Western Hemisphere initiative launched in 2012, and through the US Coast Guard’s Western Hemisphere strategy, which started in 2014.

The US Coast Guard has warned repeatedly in recent years that its resources fall short of what is needed to fulfill its interdiction responsibilities in the US’s southern maritime approaches.

“In 2014, we knew where about 80% to 85% of the activity was taking place, to include when a go-fast [boat] was leaving Colombia or Ecuador or somewhere in Central America with a shipment ultimately destined for the United States,” Coast Guard Commandant Adm. Paul Zukunft told Business Insider in December 2017. “But on the best of days we could probably put a ship over next to and a plane above maybe 10% of that 80% to 85%. We’re basically giving all of this illegal activity a free pass.”

Zukunft said the ultimate goal was deter traffickers and the people who sign on to transport drugs and contraband.

“We want these smugglers to look at that same risk calculus and say, ‘You know, you can’t pay me enough to move a shipment of illegal drugs, because I don’t want to get arrested. I don’t want to spend the next 10-plus years of my life in a US prison, where I’m severed from my family in isolation.'”