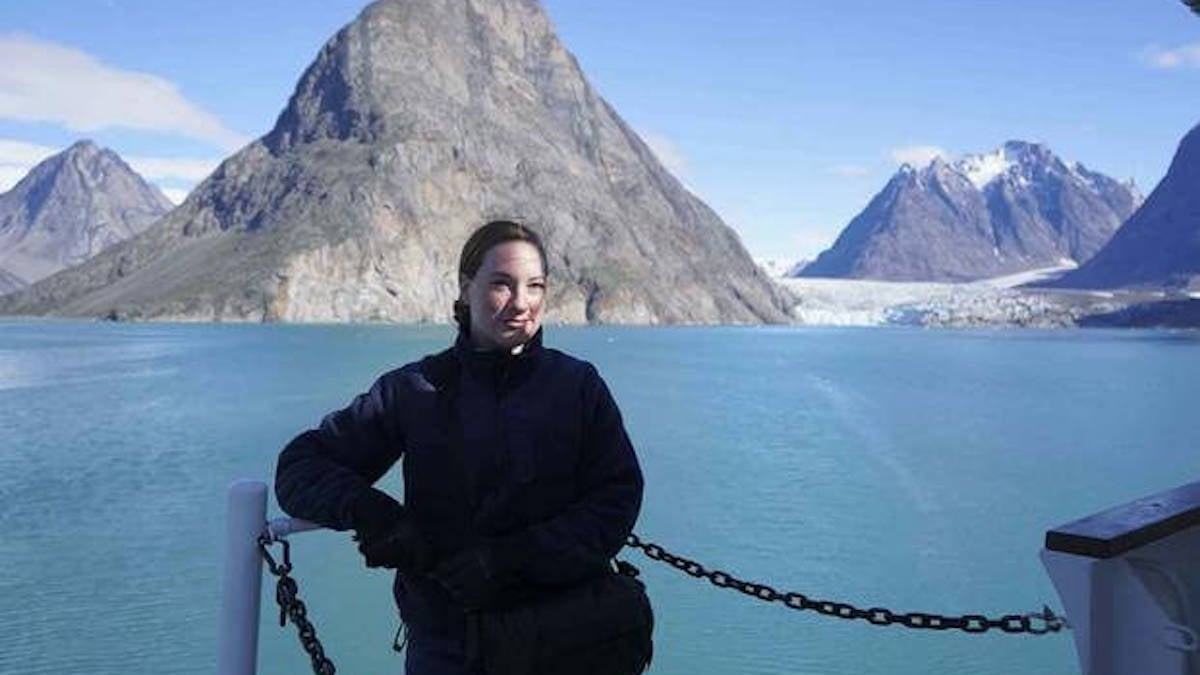 No, the man eating alone in a diner in Nuuk wasn’t Fezzik — a friendless, brainless, helpless, hopeless giant, unemployed in Greenland.

Nonetheless, U.S. Coast Guard Seaman Katlin Kilroy, dining in the same restaurant during a port visit to Greenland’s capital, took pity on the man and decided to cover the cost of his dinner. Her action set off a chain of events that resulted in an international exchange of goodwill — and a merit award.

“Paying it forward” is how Kilroy was raised in Apex, North Carolina, a town of roughly 45,000 southeast of Raleigh, she said in an interview with Coast Guard public affairs personnel, published in a news release.

“My parents used to carry around sandwiches and socks for those down on their luck. We didn’t give money, but we’d give time or buy a meal and spend time with people. Listen to them,” Kilroy said.

But instead of purchasing provisions for a person she thought was in need, Kilroy inadvertently fed the man serving as premier of Greenland, a position roughly equivalent to president or prime minister, setting off a chain of events that led to a VIP visit to the Coast Guard medium endurance cutter Campbell.

During her encounter with Premier Kim Kielsen, according to the Coast Guard release, they talked about his careers before he entered politics, as a mariner and a police officer. He then expressed interest in visiting Campbell and its crew — unexpected attention that could have landed Kilroy in hot water.

Campbell’s commander, Capt. Thomas Crane, embraced the opportunity and welcomed Kielsen aboard. Crane then accepted a personal tour of Nuuk from the nation’s top politician.

“Her chance encounter in Nuuk directly strengthened our nation’s position in an increasingly competitive Arctic domain through relationship building. Seaman Kilroy is a true shipmate,” Crane said in the release.

Kilroy has been in the Coast Guard for nearly two years, enlisting in 2018. As a non-rate described as having an affable disposition and knack for reaching people, she slipped naturally into a public affairs role, supplementing the work of the PAOs at Coast Guard Base Portsmouth, Virginia, for much of her fledgling career.

She got a chance to deploy as a public affairs representative with the medium endurance cutter Tahoma, as well as the Campbell, in August 2020 when no other rated petty officers were available, covering joint Arctic operations and exercises with the U.S. Navy, and Canadian, French and Danish maritime forces.

Her performance during the 85-day mission, documenting events and photographing Coasties at work, as well as the chance encounter at dinner, earned her the Coast Guard Achievement Medal.

“We could not have been happier with her performance,” Crane said. “She enabled top-level real-time visibility of these operations, reaching more than 6.6 million people.”

Kilroy is now on her way to being a Coast Guard public affairs specialist, according to the service.

And the man she bought dinner for? He is probably most well-known in the U.S. for scoffing at President Donald Trump’s pitch in 2018 to purchase Greenland — a proposal that came up during a conversation between the president and Danish ambassador Lars Gert Lose.

Denmark and Greenland both nixed the idea outright.

“Greenland is not Danish. Greenland is Greenlandic. I persistently hope that this is not something that is seriously meant,” Kielsen said.

After his encounter with Kilroy, Kielsen lost his reelection bid for the chairmanship of his party — a defeat that may lead to his ouster as premier. So, while Kielsen is not exactly unemployed in Greenland, his political future is uncertain.

To Kilroy, paying for a stranger’s meal anywhere, regardless of stature, is a natural extension of her Southern hospitality.

“People also see me in uniform … They pay it forward, and I do too. In this case, it happened to be the premier, and we had a nice conversation,” Kilroy said.