Commanding Crew-1 - We Are The Mighty 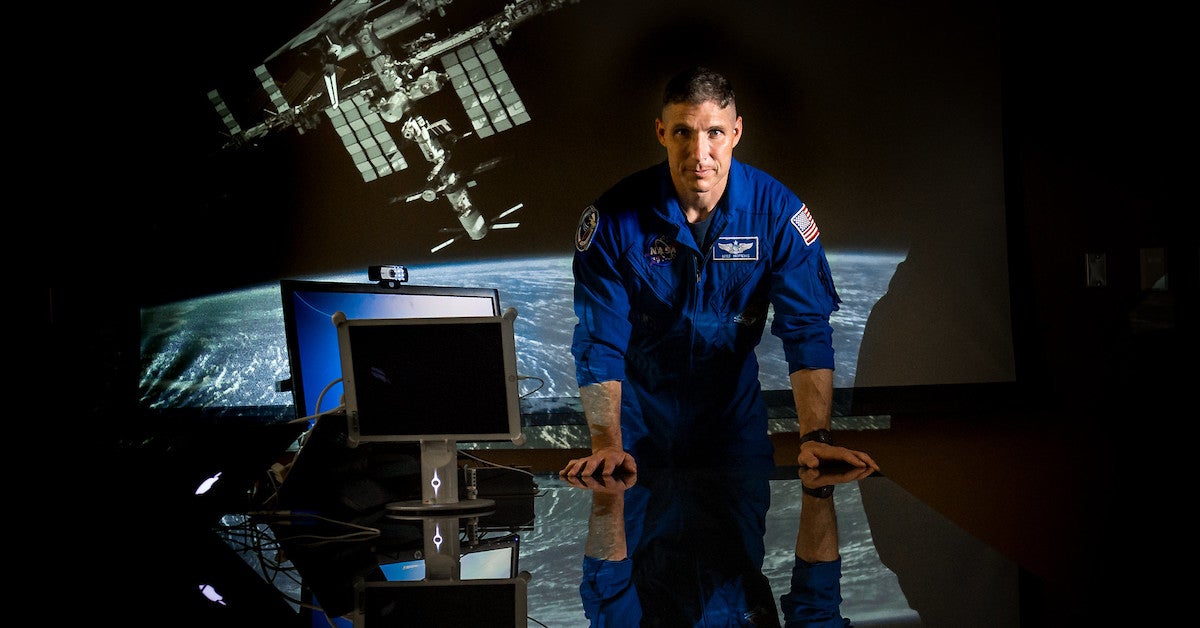 U.S. Air Force Col. Michael Hopkins is leading an international crew of astronauts on a six-month mission to the International Space Station following a successful launch on the first NASA-certified commercial human spacecraft system in history.

NASA’s SpaceX Crew-1 mission lifted off at 7:27 p.m. EST Sunday from Launch Complex 39A at the agency’s Kennedy Space Center in Florida aboard their Crew Dragon spacecraft propelled by a SpaceX Falcon 9 rocketNASA astronauts Michael Hopkins, Victor Glover, and Shannon Walker, along with Soichi Noguchi of the Japan Aerospace Exploration Agency (JAXA), into orbit to begin a six-month science mission aboard the space station.

Selected as a NASA astronaut in 2009, Hopkins spent 166 days in space as a long-duration crew member of Expeditions 37 and 38 and completed two spacewalks totaling 12 hours and 58 minutes. Before joining NASA, Hopkins was a flight test engineer with the U.S. Air Force. As commander, Hopkins is responsible for all phases of flight, from launch to re-entry. He also will serve as an Expedition 64 flight engineer aboard the station.

Bookended by planning meetings with ground controllers, a day aboard ISS is packed with work from start to finish, said Hopkins during a 2017 interview with Airman magazine.

“It is usually going to involve three things; some type of maintenance, whether it’s a preplanned or something broke and you have to fix it; science, which is the primary reason for the space station, and exercise. We usually have at least two hours of exercise on our schedule every day. That’s really the next 12 hours.”

The Crew 1 mission is the first of six crewed missions NASA and SpaceX will fly as part of the agency’s Commercial Crew Program.

“I think that the development of these commercial vehicles isn’t involving just NASA. There’s a there’s a lot of good synergy that happens in programs like this. The Air Force is a part of and benefits from that effort”, Hopkins said.

“It’s not just the development of the new cap capsules per se, but it’s also the rockets that go along with that. Those same rockets can potentially be utilized by the Air Force for putting their payloads or platforms up in space. I think that’s one of the things that makes it very exciting, particularly for myself and some of the other Air Force astronauts. You’re not only supporting NASA but you’re also supporting your parent organization; in our case, the Air Force.”

The Crew 1 mission has several firsts, including: the first flight of the NASA-certified commercial system designed for crew transportation, which moves the system from development into regular flights; the first international crew of four to launch on an American commercial spacecraft; the first time the space station’s long duration expedition crew size will increase from six to seven crew members, which will add to the crew time available for research; and the first time the Federal Aviation Administration has licensed a human orbital spaceflight launch.

The crew will conduct science and maintenance during a six-month stay aboard the orbiting laboratory and will return in spring 2021. It is scheduled to be the longest human space mission launched from the United States. The Crew Dragon spacecraft is capable of staying in orbit for at least 210 days, as a NASA requirement.

Crew Dragon also is delivering more than 500 pounds of cargo, new science hardware and experiments inside, including Food Physiology, a study of the effects of an optimized diet on crew health and, Genes in Space-7, a student-designed experiment that aims to better understand how spaceflight affects brain function, enabling scientists to keep astronauts healthy as they prepare for long-duration missions in low-Earth orbit and beyond.

Among the science and research investigations the crew will support during its six-month mission are a study using chips with tissue that mimics the structure and function of human organs to understand the role of microgravity on human health and diseases and translate those findings to improve human health on Earth, growing radishes in different types of light and soils as part of ongoing efforts to produce food in space, and testing a new system to remove heat from NASA’s next generation spacesuit, the Exploration Extravehicular Mobility Unit (xEMU).

During their stay on the orbiting laboratory, Crew-1 astronauts expect to see a range of un-crewed spacecraft including the next generation of SpaceX cargo Dragon spacecraft, the Northrop Grumman Cygnus, and the Boeing CST-100 Starliner on its un-crewed flight test to the station. They also will conduct a variety of spacewalks and welcome crews of the Russian Soyuz vehicle and the next SpaceX Crew Dragon in 2021.

What little free time astronauts have aboard ISS is spent checking email, talking with family, or taking a view that only a relative handful of humans have seen in person.

“You’re 250 miles above the earth, and you’re getting to see it in a way that very few of us get to see – live and in person”, Hopkins said. “Your see the images and those are very representative, it looks very real, but when you see it with your own eyes, it’s stunning.

“Sometimes with your free time you just go hang out by the window. Even at nighttime. When it’s dark out, you wouldn’t think there’s that much to see, but then you’d be going over Africa, and there’d be this huge storm front over the continent, and you get to see these lightning storms from above. You see this flash of light going here and there and just dancing across the whole continent. Amazing. It never gets old.”