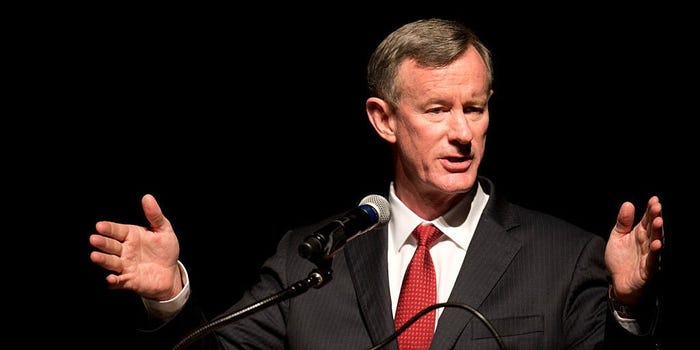 Retired Adm. William McRaven, a former Navy SEAL and special operations commander, is making a children’s book about his experiences and lessons learned from them.

The book, “Make Your Bed with Skipper the Seal,” is an adaptation of the 2017 bestseller “Make Your Bed: Little Things That Can Change Your Life … And Maybe the World” for kids that includes “life lessons from Navy SEAL training,” publisher Little, Brown, and Company said.

“As Skipper the seal embarks on Navy SEAL training, he and his hardworking friends learn much more than how to pass a swimming test or how to dive off a ship,” the publishing house wrote in a description of the upcoming book.

“To be a great SEAL, you also have to take risks, deal with failure, and persevere through tough times—just as you do in life,” it said.

“When my three children were young, I always took time to read to them,” McRaven told the Associated Press.

“I found that stories of adventure and overcoming challenges helped shape their character and inspired them to be their very best,” he added. “I hope that ‘Make Your Bed with Skipper the Seal’ is just such a book!”

McRaven’s first “Make Your Bed” book was based on a commencement speech he delivered to the 2014 graduating class at the University of Texas Austin, the admiral’s alma mater, and focused on ten important lessons he learned from training to become a Navy SEAL, who are among the military’s most elite special operators.

“They were simple lessons that deal with overcoming the trials of SEAL training,” McRaven wrote in the beginning of the book, “but the ten lessons were equally important in dealing with the challenges of life — no matter who you are.”

McRaven spent nearly four decades in the US armed forces, rising through the ranks and taking on various leadership positions. During his career, he led the 2009 rescue of Richard Phillips, then the captain of a merchant vessel that had been captured by Somali pirates, and oversaw the 2011 raid into Pakistan that eliminated terrorist leader Osama bin Laden.

He retired from the US military in 2014.

While “Make Your Bed” focuses on SEAL training, the 2019 follow-on book “Sea Stories: My Life in Special Operations” offers further insight into McRaven’s military service, including the daring raid to take out Osama bin Laden and the unusual situation that saw former President Barack Obama gift the admiral a tape measure as a thank you for the raid, among other things.

The admiral also has another book, “The Hero Code: Lessons Learned from Lives Well Lived,” that talks about some of the people he has met in his 65 years that have had an impact on his life. That book will come out in April. His first children’s book is expected six months later.

In addition to writing several books over the past few years, McRaven has also been an outspoken critic of the last administration, writing a number of widely-read opinion articles criticizing former President Donald Trump and members of his team.

One of his more famous op-eds was a 2019 article titled “Our Republic Is Under Attack From the President,” in which he said: “If this president doesn’t demonstrate the leadership that America needs, both domestically and abroad, then it is time for a new person in the Oval Office.”

He has also participated in a number of policy discussions. Most recently, he sounded alarms about Russian President Vladimir Putin and the threat that he poses to US national interests.