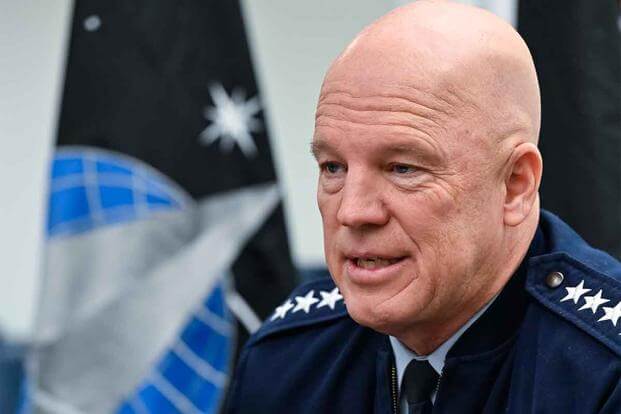 The head of the U.S. Space Force said it hasn’t been easy to get the American public to understand what the military’s newest branch does, but vowed to keep working on getting its message across.

“Space doesn’t have a mother. You can’t reach out and hug a satellite. You can’t see it; you can’t touch it. It’s hard to have that connection,” Gen. John Raymond, chief of space operations for the service, told reporters Wednesday during a Defense Writers Group virtual event.

Since former President Donald Trump left office, many have speculated on the Space Force’s future. Space Force has a public relations crisis, Defense News reported, and is often seen as the Pentagon’s stepchild branch.

When White House Press Secretary Jen Psaki was asked Tuesday about President Joe Biden’s plans for the service, critics argued she came off as dismissive. Lawmakers such as Rep. Mike Rogers, R-Ala., condemned her response and asked her to apologize to the men and women of Space Force.Advertisement

“We look forward to the continuing work of Space Force and invite the members of the team to come visit us in the briefing room anytime to share an update on their important work,” Psaki tweeted hours after the briefing.

Raymond said Wednesday that he would “welcome the opportunity.”

In a separate briefing, Psaki said the Space Force “has the full support” of the Biden administration, confirming the president has no intention of undoing the labor already done to form the branch.

“We’re not revisiting the decision,” she said.

The Space Force has tried to explain its role to the public. Leaders have talked about overseeing everyday tasks like providing GPS capabilities on cellphones and enabling connections for ATM transactions, as well as more sophisticated missions such as early detection of incoming ballistic missiles — something the service accomplished during the Iranian attack on American forces in Iraq last year.

“I really believe we are communicating really well in a number of areas,” Raymond said, citing efforts to deter adversaries such as Russia and China in space, and collaborating with partners, allies and lawmakers on Capitol Hill.

“I think it’s also hard to understand because it’s been severely classified what the threats are out there,” he added. “I think we’ve been doing a lot of work to be able to talk about those threats, and to talk about the value of space to every single American. … But I think there still is a challenge that it’s hard to understand that connection to space. And we’ll keep working at it.”

Lawmakers have taken note, and congressional support for the Space Force is growing, Todd Harrison, director of the Aerospace Security Project at the Center for Strategic & International Studies, said in November.

He pointed out that the Space Force started out as a bipartisan effort. Rogers and Jim Cooper, D-Tenn., proposed in 2017 that the Air Force should create an internal “U.S. Space Corps” in hopes of taking adversarial threats in space more seriously. (The Air Force, which considered itself the leader of space operations, opposed the idea at the time.)

But the Trump administration took hold of the messaging surrounding the Space Force early on — with Trump surprising Marine Corps Gen. Joseph Dunford, then-chairman of the Joint Chiefs, in 2018 with his push to form the new branch. It has been seen as “Trump’s Space Force” for that reason, experts including Harrison say.

Trump made the Space Force a reality when he signed the fiscal 2020 National Defense Authorization Act on Dec. 20, 2019. The move temporarily reassigned 16,000 airmen and civilians to the new branch and dissolved the Air Force’s leading major command overseeing space, Air Force Space Command.

Some still believe space operations should fall under the Air Force, and the Space Force continues to be criticized and mocked even after a year of existence.

Actor Steve Carell based his new comedy show on the Space Force; it premiered on Netflix last year. And the service continues to get a bad rap on social media, from users posting that it “stole” the Star Trek logo; to ridiculing Guardians, the name for Space Force members; to denouncing its existence because of its association with Trump.

“It doesn’t help that [the service’s] recruitment [ad] shows astronauts and fictional space stations,” another user posted Wednesday on Twitter, referring to how Space Force and NASA’s commercial missions often get misconstrued.

Others fail to see the difference between U.S. Space Command — reactivated in August 2019, before the establishment of the Space Force — and the military’s sixth branch. SPACECOM is responsible for military operations related to space, while the Space Force organizes and trains space personnel.

Inside the Pentagon, messaging to the force has been “spectacular,” Raymond said, adding that there is an excitement for the mission, which supports the joint force.

But there was mockery once again Wednesday as Raymond’s words made it on Twitter, with users asking someone to manufacture a satellite plush toy to hug at night. Others called for an “adopt a satellite” program akin to sponsoring an endangered animal in the wild or blamed Trump for the service’s creation, claiming it wasted taxpayer dollars or complaining about the militarization of space operations.

“Communication is only fantastic if we understand the message,” tweeted Maggie Feldman-Piltch, head of NatSecGirlSquad. “We don’t need a mother, we need an origin story and a value statement.”