It's official: Lloyd Austin is the first Black Defense Secretary - We Are The Mighty 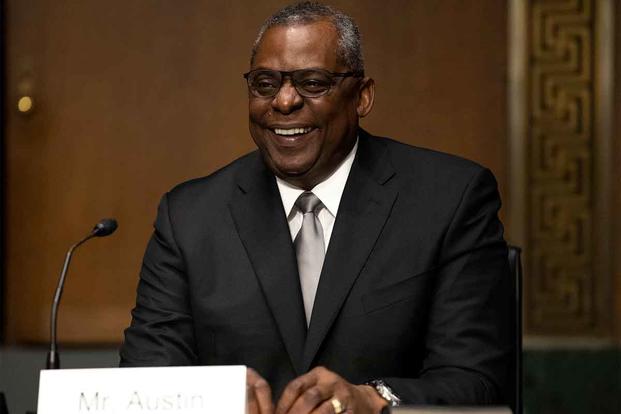 Members of the Senate on Friday confirmed Lloyd Austin, a retired Army four-star general, to run the Defense Department — a historic move that gives the military its first Black defense secretary.

Senators confirmed Austin’s nomination in a vote of 93 to 2. Austin is the second member of President Joe Biden’s Cabinet to be approved, following Avril Haines as director of national intelligence on Wednesday.

Austin arrived at the Pentagon just after noon Friday to be sworn in and begin work.

He tweeted immediately following the vote that he’s proud to be the first African American to hold the position.

Read Next: After Lawmakers Intervene, Guard Troops Allowed to Return to Capitol for BreaksAdvertisement

The House and Senate on Thursday cleared the way for Austin to be confirmed after both chambers approved the waiver he needs to serve as defense secretary. He’s been out of uniform for less than the seven years required by law after retiring from the Army in 2016.

The House approved the waiver in a vote of 326 to 78 Thursday afternoon. The Senate followed suit, 69 to 27.

Austin said in a video message posted earlier this month that becoming the first Black defense secretary would be an honor and privilege. But it’s not the first time he’s broken barriers in his career.

“It shouldn’t have taken this long for us to get here,” he said. “There should’ve been someone that preceded me.”

Austin steps into the role as defense secretary at a time when the military is facing renewed scrutiny over the issue of racism and extremism in the ranks.

Several troops have beenforced out of the military in recent years forbelonging to white supremacist groups orposting racist comments online. Military leaders across the force are reviewing policies that might inadvertently discriminate against some troops.

Austin told lawmakers Tuesday that he was committed to addressing those problems once he became defense secretary.

The military community is also overrepresented among those arrested following the Jan. 6 siege at the U.S. Capitol. Nearly one in five, or almost 20%, of the people who have been charged over their alleged involvement in the attack appear to have a military history, NPR reported this week. Only about 7% of all American adults are military veterans, NPR noted.

Lawmakers from both parties have said Austin is the right person to lead the Defense Department at this time, despite not meeting the seven-year “cooling-off period” required to serve in the civilian leadership position.

Several senators said ahead of Friday’s vote that they would confirm Austin. Sen. Jack Reed, a Rhode Island Democrat who’s on the Senate Armed Services Committee, called Austin an exceptionally qualified leader with a long and distinguished career.

Still, both Reed and Sen. Republican leader Mitch McConnell of Kentucky said Congress should not overlook the importance of the law that bars recently retired leaders, like Austin, from serving as defense secretary.

“I’ll vote today to confirm a clear patriot with an impressive career,” McConnell said. “But I’ll cast that vote with the understanding that our new secretary of defense specifically commits to balancing civil-military relations, empowering civilian leaders at the Pentagon and playing an active role in the inherently political budget process to get our forces what they need.”

The retired Army general is the second retired officer to get a waiver in four years. Congress granted one to Jim Mattis when President Donald Trump nominated him to be SecDef a few years after he retired from the Marine Corps.

The two Republican senators to vote against Austin’s confirmation were Mike Lee of Utah and Josh Hawley of Missouri.