Martin Luther King Jr.: Planting trees in whose shade he would never sit - We Are The Mighty

Martin Luther King Jr.: Planting trees in whose shade he would never sit 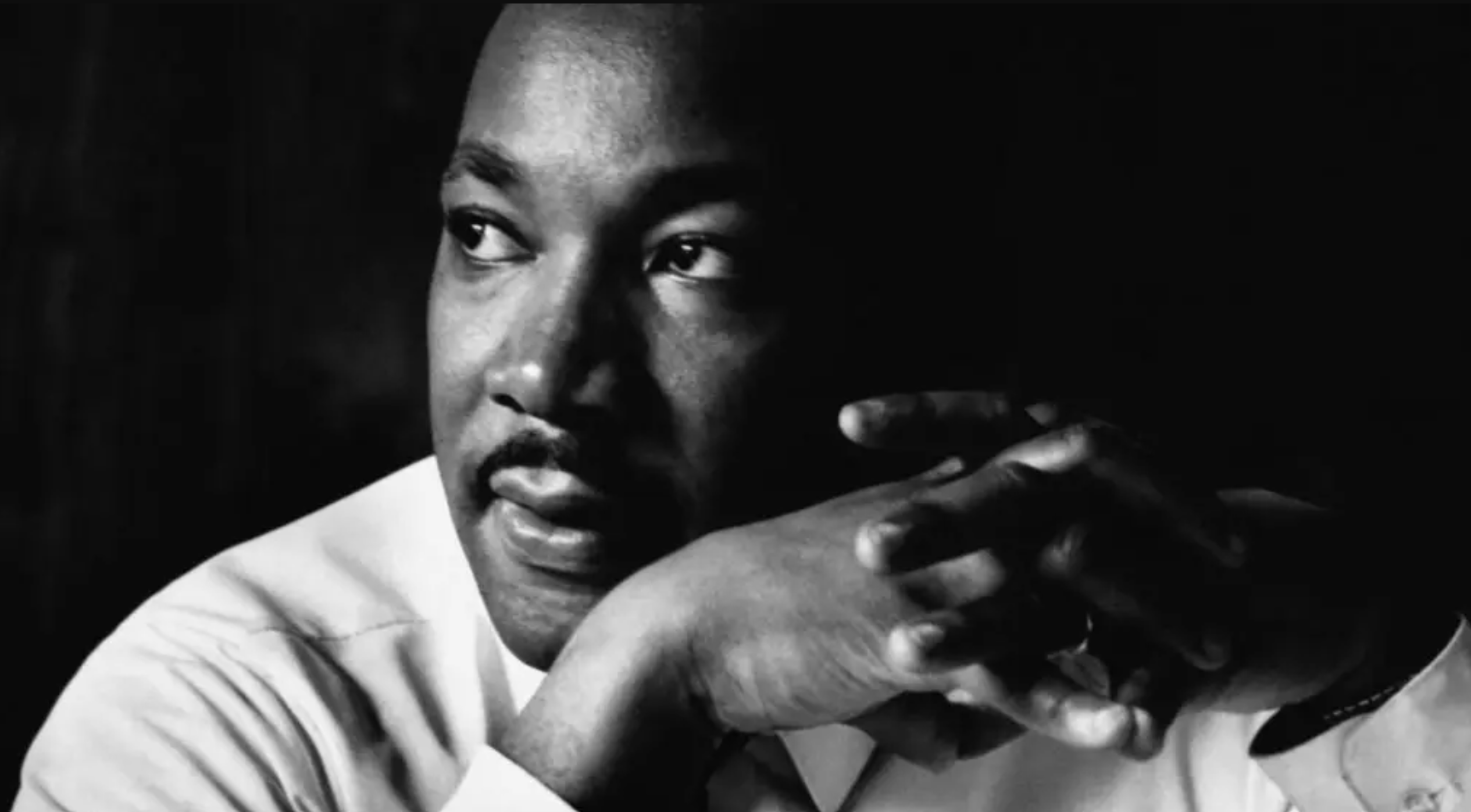 On September 20, 1958, Dr. Martin Luther King Jr. arrived at the Blumstein’s department store in Harlem, New York for a book signing. His new book “Stride Toward Freedom” chronicled the Montgomery bus boycott that began when Rosa Parks refused to surrender her seat on a public bus to a white passenger. The boycott had come to a close in December of 1956, when the Supreme Court ruled that the segregation of public buses was indeed unconstitutional. It was a watershed moment for both the Civil Rights movement and for America itself.

As a crowd formed in the shoe section of Blumstein’s, King took his seat behind a roped-off section of the store. Soon, eager readers were lining up to catch a moment of the influential figure’s time and his signature for their book. He exchanged brief pleasantries with each person as they approached the table, and as a 42-year-old woman in a stylish outfit and sequined cat’s eye-glasses took her turn, King’s demeanor was no different.

“Are you Martin Luther King?” The woman reportedly asked through a notable southern accent.

“Yes,” King replied, but before he could go on any further, the seemingly ordinary woman threw herself at the table and the man behind it, plunging a seven-inch pen knife into King’s chest.

Bystanders responded by pulling the woman away from King and pinning her on the floor as she shouted, “I’ve been after him for six years. I’m glad I done it!”

King, a man who was no stranger to threats, seemed somehow stoically calm, despite the serious bleeding from his chest. As his fans and supporters surrounded him, ushering him toward medical help, he was heard counseling them, soothing their collective anxieties as though he knew everything was going to be okay.

“That’s all right. Everything is going to be all right,” King was heard saying.

Of course, King couldn’t know it would be all right. Maybe it was just in his nature to ease the burden on others. With the knife still in his chest, King was lifted in his chair and carried out to an ambulance that would rush him to Harlem Hospital. Shortly thereafter, the police would march the same dangerous woman back into King’s company. This time there were no books to sign. The police wanted him to confirm that the women they had in custody was indeed his attacker. When they’d placed her under arrest, they also recovered a loaded .25 caliber pistol from her bra.

Related: THE STUNNING COMBAT HISTORY OF THE TUSKEGEE AIRMEN

Despite the terrible attack, King was lucky. The seven-inch knife had punctured his chest just a fraction of an inch away from his aorta, or the main artery that carried blood from his heart to the rest of his body. King, who remained conscious and soothing throughout the ordeal, had only narrowly escaped death, but the risk hadn’t passed. He was rushed into surgery, where he had two ribs removed from his side to allow the knife to be pulled out without causing further damage.

“The X-rays revealed that the tip of the blade was on the edge of my aorta, the main artery,” Dr. King later said in his famed ‘I’ve been to the mountaintop’ speech.

“And once that’s punctured, you’re drowned in your own blood — that’s the end of you.”

He would leave the hospital days later with a new scar in the shape of a cross over his heart. Despite the brutal attack, he was resolute when questioned by the press: He bore no ill will toward the woman who had stabbed him and reaffirmed his position that non-violence is the only way to manifest the type of positive change he sought for his country.

The attacker, whose name was Izola Curry, didn’t look like the sort of person most would expect to attack Dr. Martin Luther King Jr. Curry was a fashionable middle-aged Black woman, but beneath her polished exterior laid a turbulent and troubled mind. Curry was a paranoid schizophrenic who had struggled with her mental health for years. In her confused state, she’d grown convinced that King and the NAACP were conspiring with communists against her. To King, however, the attack was a symptom of a greater illness than even Curry’s schizophrenia.

“A climate of hatred and bitterness so permeates areas of our nation that inevitably deeds of extreme violence must erupt,” he said at the time.

“The experience of these last few days has deepened my faith in the relevance of the spirit of nonviolence, if necessary social change is peacefully to take place.”

King would continue to change the world for another decade, before yet another act of violence would rob him of the remainder of his life. It could be argued that, as of that fateful day in 1958, he was acutely aware of the risk his efforts posed to his safety. If he did feel fear somewhere beneath the obvious empathy he felt for the woman who attacked him, however, it never showed. King did not shy away from his work, nor his beliefs, no matter the risk.

Now, as we prepare to honor the memory and the legacy of Dr. Martin Luther King Jr. some 63-years after his death, the story of the near fatal attack offers some uncomfortable parallels with today’s America. As rhetoric about race, mental illness, and the danger of radicalized beliefs permeate our national discourse today just as it did in 1958, we could all learn something from King’s ability to find a catalyst for positive change in even the darkest of places.

In King’s final public speech, he recalled the 1958 attack and how close he came to death… but even amid telling the story, King’s focus was not on his own mortality, but rather on the goodness he found in others as a result of the experience, and the progress he envisioned for America to come.

He told the story of a 9-year-old white girl who wrote to him to say that she’d read that if he had sneezed while the blade was in his chest, he almost certainly would have died.

“And I’m simply writing you to say that I’m so happy that you didn’t sneeze,” King recounted.

King went on to echo the young girl’s sentiment, using it to remind the audience about the important steps the Civil Rights movement had made in the years that followed. King didn’t recount these events like he was listing his own victories, but there was an air of pride about his statements. King, like so many great Americans before him, saw each victory and failure as another part of the struggle that has defined America since its very inception. America, he knew, has always been defined by the aspiration for a better tomorrow, the drive to become a more perfect union.

“If I had sneezed — If I had sneezed I wouldn’t have been here in 1963, when the black people of Birmingham, Alabama, aroused the conscience of this nation, and brought into being the Civil Rights Bill.

If I had sneezed, I wouldn’t have had a chance later that year, in August, to try to tell America about a dream that I had had.

If I had sneezed, I wouldn’t have been down in Selma, Alabama, to see the great Movement there.

If I had sneezed, I wouldn’t have been in Memphis to see a community rally around those brothers and sisters who are suffering.

I’m so happy that I didn’t sneeze.”

For all of his philosophical wisdom, King was, at his heart, a pragmatic man. He saw the complexity, the hate, the love, the anger, and the joy all woven into the fabric of his nation. He knew his goals were grander than one man, no matter his eloquence and empathy. He knew that the progress he helped usher in was delicate, and that the fight for our nation’s soul was far from over. King knew America would never be perfect… but importantly, he knew that it was in the effort, in the aspiration, that America’s true greatness had always, and will always, lie.

In a way, it’s deeply tragic that Dr. Martin Luther King Jr. was able to look out over the crowd of supporters that had gathered on that April day in 1968 and know that he wouldn’t be there to see America embrace the equality he longed for… but King was a great American. Like our Founding Fathers, King knew that a society grows great when men plant trees in whose shade they know they shall never sit. Progress, like a tree, needs time to take root.

“Like anybody, I would like to live a long life. Longevity has its place. But I’m not concerned about that now. I just want to do God’s will. And He’s allowed me to go up to the mountain. And I’ve looked over. And I’ve seen the Promised Land. I may not get there with you. But I want you to know tonight, that we, as a people, will get to the promised land!”