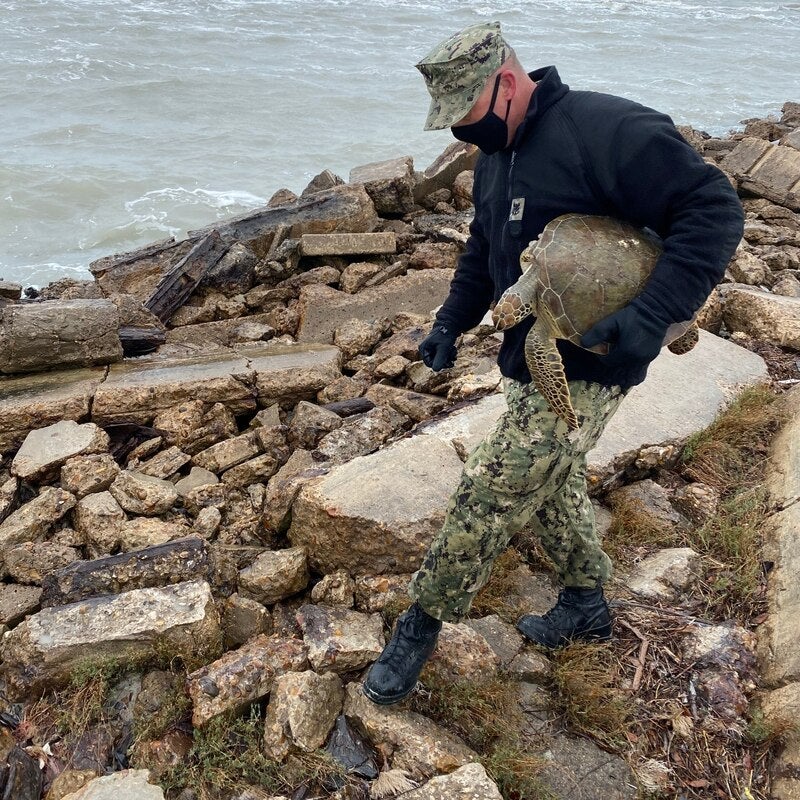 Although the nation remained devastated over the winter storm which severely impacted Texas in particular, it wasn’t just Americans in harms way. It was catastrophic for animals on land in the water, too.

The Washington Post caught up with Will Bellamy, a veteran of the Army and Marine Corps who is a resident of the Corpus Christi area in Texas. In his interview, he reported how he and his son saw some sea turtles in distress after rescuing a few injured birds. Bellamy immediately reached out to Captain Christopher Jason who is in command of Naval Air Station Corpus Christi.

Jason used his own paddleboard to rescue a few of the cold-shocked sea turtles, only able to fit three in his lap. Sadly, they weren’t the only ones. The next day, it was apparent to both Jason and Bellamy the situation was far more urgent than they originally thought. During his phone interview, Bellamy told the Washington Post, “It was like an apocalypse of turtles littered on the beach.”

When the water temperature goes below 50 degrees fahrenheit, green sea turtles become lethargic. This causes them to stop moving and float to the surface, leaving them vulnerable to being hit by boats or even washing ashore, like they did in Texas.

The green sea turtle is Texas’ most common sea turtle. The area along the gulf’s coast is where around 87% of them lay their nests during mating season each year. Sea Turtle Inc, based out of South Padre Island, has been working around the clock to save the cold-shocked green sea turtles washing up on the shores of Texas. In a statement the organization wrote, “Cold-stun events happen when the water gets too cold for sea turtles to maintain their body temperature.”

In an interview with Military Times, Jason said although he was aware of cold-stunning among sea turtles, this was unlike anything he’d ever seen since taking command in 2019. It truly was a military team effort. The Navy base community was also joined by Coast Guardsmen and soldiers. Flight students, military spouses, family members and veterans all dove in to support rescue efforts.

Between all of them, they’ve rescued around 1,100 sea turtles and the numbers continue to grow. Only 20 have perished.

According to National Geographic, nearly 5,000 green sea turtles have been rescued throughout the coast of Texas since the unprecedented winter storm hit. Texans and members of the military community have been bringing them in by the carload, banding together to save the threatened species. In a Facebook post, Sea Turtle Inc. wrote “This is the biggest sea turtle cold-stunned event in south Texas.”

Despite handling challenging times of their own with loss of power and water, these military members and their supporters went all in to save the turtles. Without their dedicated efforts, it’s apparent the Texas green sea turtle population would have been decimated. It’s a powerful reminder of how working together even during the hardest of times can truly make all the difference in the world.