The Navy's Osprey landed, refueled and took off from an aircraft carrier for the first time - We Are The Mighty

The Navy’s Osprey landed, refueled and took off from an aircraft carrier for the first time 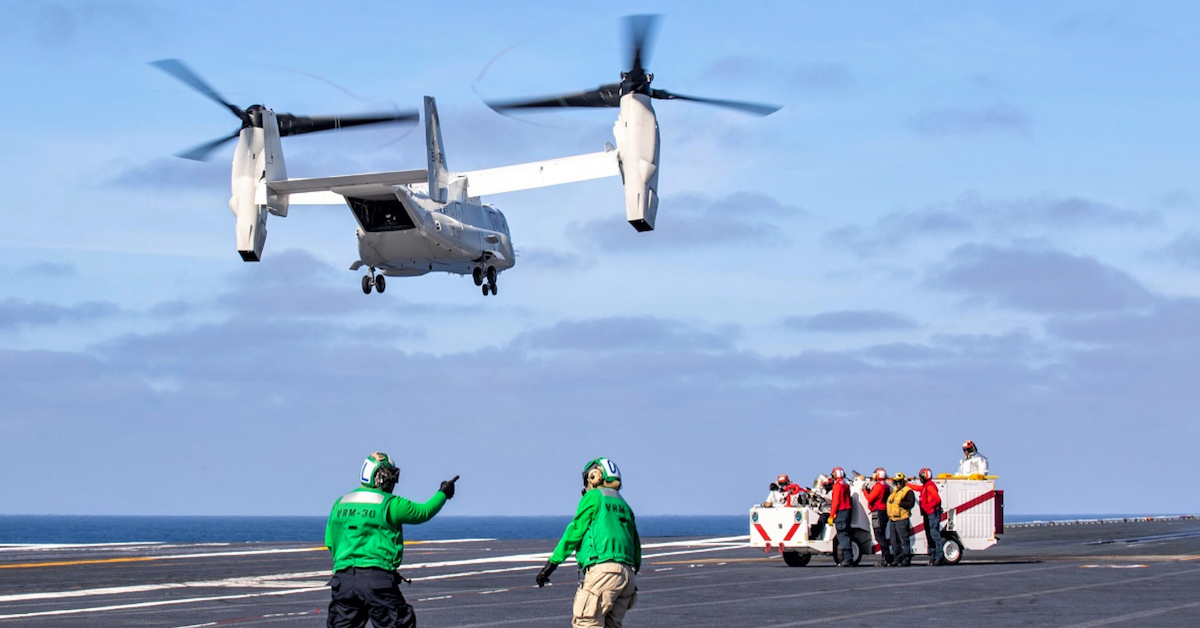 A CMV-22B performs a rolling takeoff from the deck of the Carl Vinson (U.S. Navy).

Since 1965, the Navy’s carrier onboard delivery mission has been performed by the Grumman C-2 Greyhound. The C-2s fly mail, passengers and supplies between aircraft carriers and land bases. Despite decades of overhauls and upgrades, the Navy plans to replace the C-2 with the CMV-22B Osprey by 2024. On November 20, 2020, the Osprey reached its first major milestone on its path to taking on the COD role.

While conducting routine maritime operations in the Pacific, USS Carl Vinson received an Osprey aboard its deck. The landing marked the first time that the new COD platform has ever landed on a carrier. The operations continued the next day to include a refueling and rolling takeoff.

The CMV-22B can carry up to 6,000 pounds of cargo and has a range of 1,150 nautical miles. While these performance figures are inferior to the outgoing C-2, the Osprey’s adoption is driven by its ability to support the new F-35C Lightning II Joint Strike Fighter. The Osprey is able to carry the F-35’s Pratt & Whitney F135 engine and deliver it to and from both aircraft carriers and amphibious assault ships. Additionally, the Osprey brings a slew of new capabilities to the COD role.

The Fleet Logisitics Multi-Mission Squadron VRM-30 “Titans,” based out of NAS North Island, California, took possession of its first Osprey in 2020.