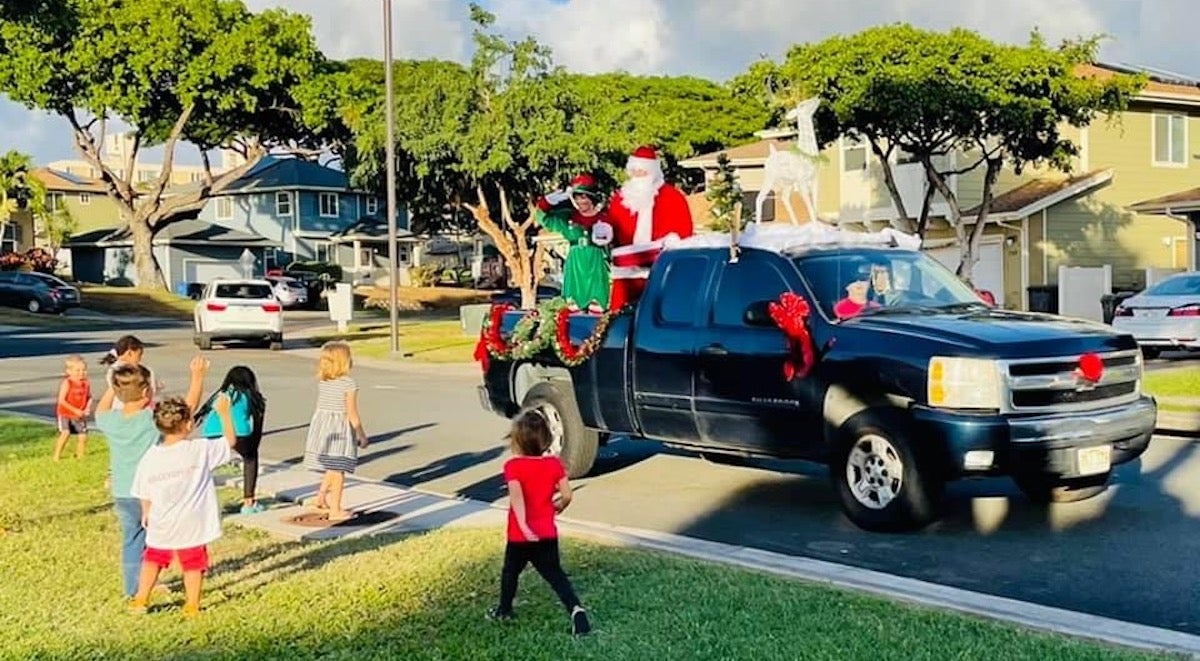 On Saturday, December 12, 2020, Santa and his elf could be seen driving around central Oahu waving and handing out candy canes to delighted children waving from their driveways as holiday music rang through the air. But this wasn’t an event sponsored by the city or county, or even a military spouses’ group. It was one couple trying to bring the spirit of Christmas to their community.

“It’s been such a hard year for the kids,” PJ Byers told We Are The Mighty. “We wanted to bring an element of Christmas magic to them.”

When PJ and Jenny Byers realized their son Declan, 3, wasn’t going to be able to see Santa in a traditional way this year, they knew they wouldn’t be the only parents feeling a little “bah humbug.”

“It was actually our neighbor’s son who is battling leukemia that got me thinking about other people’s situations,” Jenny Byers shared. “It got me thinking outside the box of my own life. It reminded me that there were other people facing different scenarios and everyone’s circumstance is different in this pandemic.”

Armed with inspiration, the Byers decided to take matters into their own hands. In early fall, the couple ordered costumes from the internet with the intention to create a magical Santa ‘drive through’ experience.

“When we first tossed around the idea for our neighborhood, we didn’t know what December was going to look like,” PJ, a U.S. Naval officer stationed at Pearl Harbor, said. “The closer it got to the holiday season, we decided we wanted to go ahead with the idea so that no matter what your circumstance was – whether you feel comfortable going to the mall with plexiglass or not – every child in our surrounding community would have the chance to see Santa.”

As the holidays neared, the Byers posted their plan in their Facebook community group to ensure neighbors felt comfortable with them driving around in costume and tossing out candy canes.

“I was shocked by the response,” Jenny said. “So many people were so excited and thankful we were offering that they started offering to help. We were just planning on doing it all ourselves. Everyone started pitching in and we got a speaker from a neighbor down the street. We got a Christmas tree donated to put in the back of the truck and several neighbors donated candy canes for us to toss out to the kids.”

Within the Facebook page, the Byers set a date and time for the Santa spectacular.

On the day of the event, the couple festooned their truck, suited up for the big event, and began making their way through the neighborhood.

“The kids were so happy,” Jenny shared, adding that local community members had donated more than 1,000 candy canes. “They were so excited to see Santa. We followed COVID guidelines and all candy canes were pre-wrapped. Santa was wearing gloves and there was no contact. It was so sweet to see so many kids so excited and happy.”

The couple’s son, Declan, waved from a neighbor’s driveway as Santa drove by, none the wiser his dad was the man in red.

The Byers shared that beyond something fun for kids, it was a gratifying opportunity for them to contribute to the community.

“I was honored to do it honestly,” PJ shared. “So much has been taken away from the kids this year, it felt like the least we could do to make the Christmas season feel a little bit more normal for them.”