Watch The Rock give Navy Vet his personal custom truck 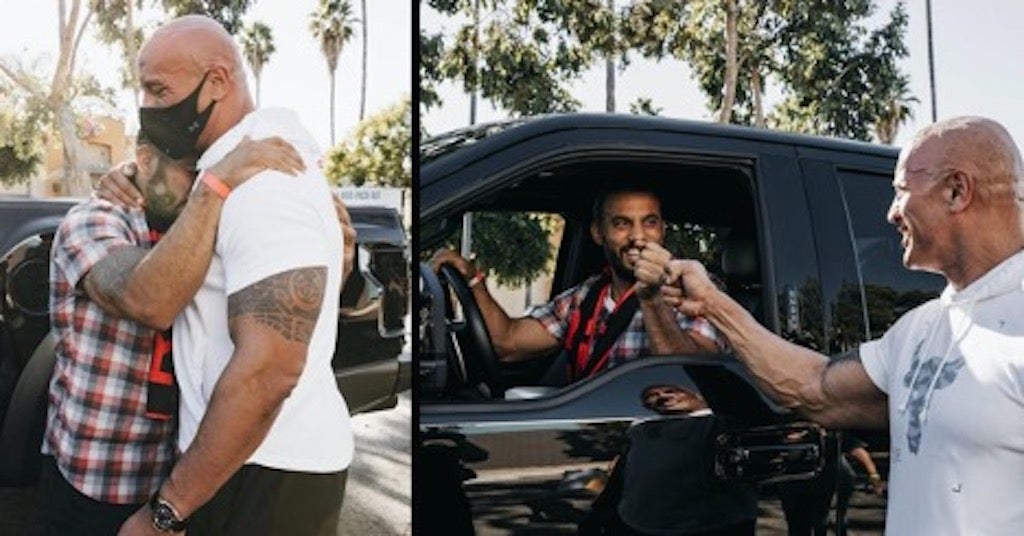 When Dwayne ‘The Rock’ Johnson heard Navy veteran Oscar Rodriguez’s story, he felt moved to do something for him. When you watch this video, you’re gonna feel moved, too.

“You do a lot of good for people, man,” Johnson told Rodriguez, who is a personal trainer who motivates others with power of positivity. “His laundry list of caring credentials is amazing,” Johnson said of the vet.

Johnson went to a theater to surprise a Red Notice screening. “There’s a dude here. I heard his story and I was really impressed by him.” Johnson pulled Rodriguez onto the stage with him and shared a little more about what Rodriguez does for his community. “I hear that you’re a personal trainer and you’re always keeping it positive. You’re a leader in your church. You help make meals for women who have been victims of domestic violence. You support your mom, who is 75.”

Rodriguez, clearly a fan (who isn’t), was moved by meeting Johnson alone — but that wasn’t the end of it. After the film (and “three hugs, bro! Three!”) Johnson invited Rodriguez out to his

truck where he claimed to have written him a card — which announced that Johnson was giving Rodriguez his personal truck. Both men were moved by the exchange.

Watch the video above to celebrate the Navy vet’s joy and feel the power of positivity yourself.