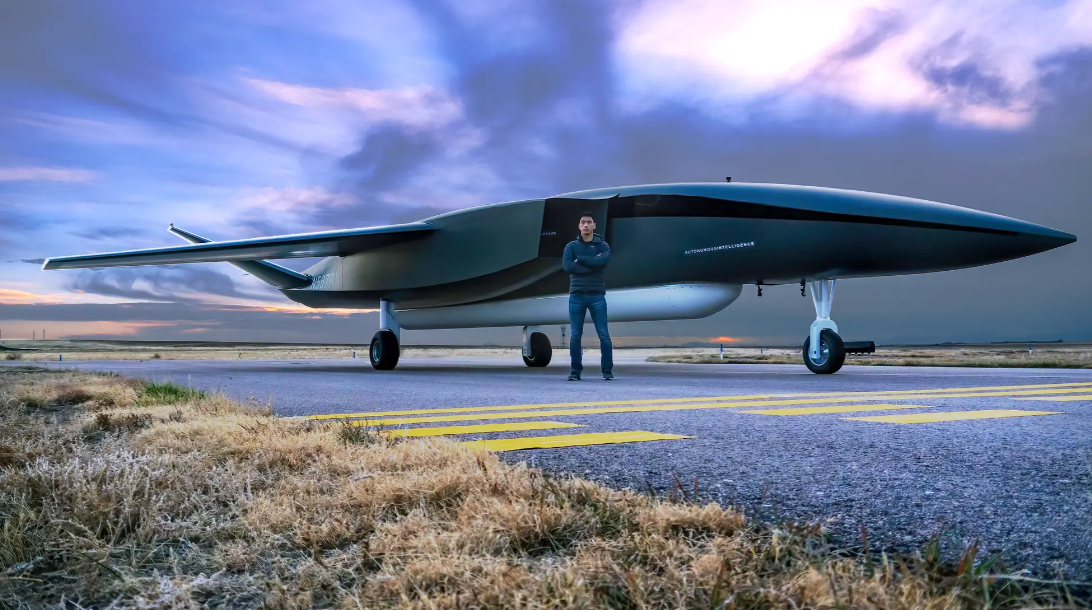 Aevum, a quiet, scrappy, and ambitious rocket-launch startup, unveiled the biggest drone in the world on Wednesday.

Called Ravn X, the fully autonomous vehicle is 80 feet long, has a wingspan of 60 feet, and stands 18 feet tall. It’s not the largest unmanned aerial vehicle (UAV) by size — the wings of Northrop Grumman’s MQ-4C Triton stretch nearly 131 feet. But the Ravn X wins on mass, weighing 55,000 pounds when you include the rocket that will drop out of its belly in midair and shoot a satellite into space.

Despite its unusual size and mission, the drone isn’t so different from your standard aircraft. It flies like a typical plane, and it and its rocket use Jet A, a very common kerosene-based fuel, says Jay Skylus, the CEO and founder of Aevum.

“We don’t need a launch site. All we need is a runway that’s one mile long and a hangar,” Skylus told Business Insider. (Even small commercial airports have runways that easily meet that mark.)

Aevum has toiled over the design for roughly five years in its makeshift headquarters: an old textile mill-turned-tech incubator in Alabama. Skylus said he mulled over the concept a decade prior to that as he hopped from NASA to one space startup after another. After being disappointed with the approaches he saw and resistance to new ideas, Skylus said, he scraped together a bit of funding and got to work with some aerospace colleagues.

Read more: A colossal rocket-launching drone is just one small part of Aevum’s bid to become the ‘Amazon of space,’ the startup’s founder says

Once Ravn X reaches the right location, speed, and altitude, its two-stage rocket is designed to drop, ignite within half a second, and launch a roughly 100-kilogram (220-lb) payload into low-Earth orbit. The approach is similar to air-launched rocket systems developed by Virgin Orbit‘s and Pegasus, though Skylus claims Aevum’s unmanned version is more efficient, cost-effective, and enterprising.

Autonomous launch to space within 180 minutes

More than 100 startups like Aevum exist in a pool of companies hoping to dominate the small-launch industry, or rockets able to fly payloads weighing 1,000 pounds or less to orbit. The market has surged in recent years with the shrinking size and increasing performance of electronics, plus a growing thirst for space-based images, data services, and more.

What Aevum has that few similar companies do, though, is the blessing and funding of the US Air Force. Last year, the Department of Defense contracted Aevum to launch a new mission called Agile Small Launch Operational Normalizer 45 (ASLON-45) for $4.9 million. The goal is to fly small, experimental satellites that can detect adversaries’ missile launches.

Aevum scooped up the contract in part because the company claims it can take a small satellite from a customer and get it into orbit within 180 minutes, if necessary — a task that’d typically take months to work out. Skylus said years of intensive software development have mostly automated the requisite launch paperwork, mission profiling, payload integration, and more. As a result, he said, Aevum needs only about 10% of the staff typically required for launching rockets.

“We are not just a launch company — I can’t emphasize that enough,” he said.

“I’m excited to see the bold innovation and responsiveness in development today by our small launch industry partners to support emerging warfighter needs,” she said in an Aevum press release. “The US Space Force is proactively partnering with industry to support US space superiority objectives. Having a robust US industry providing responsive launch capability is key to ensuring the US Space Force can respond to future threats.”

“There’s really no reason for us to not be ready. ASLON-45, like the name implies, is an agile mission. What we’re really trying to show is not that small launch vehicles can deliver stuff to orbit — Rocket Lab is already doing that,” Skylus said, referring to the New Zealand small-launch company that recently flew its sixteenth mission to orbit.

He added: “What we’re proving is agility, flexibility, responsiveness, and operational efficiency. This is a brand-new architecture, and a brand-new launch vehicle that’s never been conceived.”

Skylus acknowledged the fear some people have of drones generally, and one carrying a big rocket specifically. But he said the company is working very closely with the Federal Aviation Administration to ensure Ravn X is extremely safe to fly and launch payloads to space.

An agency spokesperson declined an interview request by told Business Insider, but noted Aevum said it plans to apply for a launch license in 2021.

“When you start looking into all of this … the line between a piloted commercial airliner versus our launch vehicle really starts to blur,” Skylus said. “It’s hard to tell where one’s more safe than the other, and why a person might feel more comfortable with in a giant Boeing airplane flying over you, every single day, versus this one.”