A WWII hero gets honored seventy years after the fact 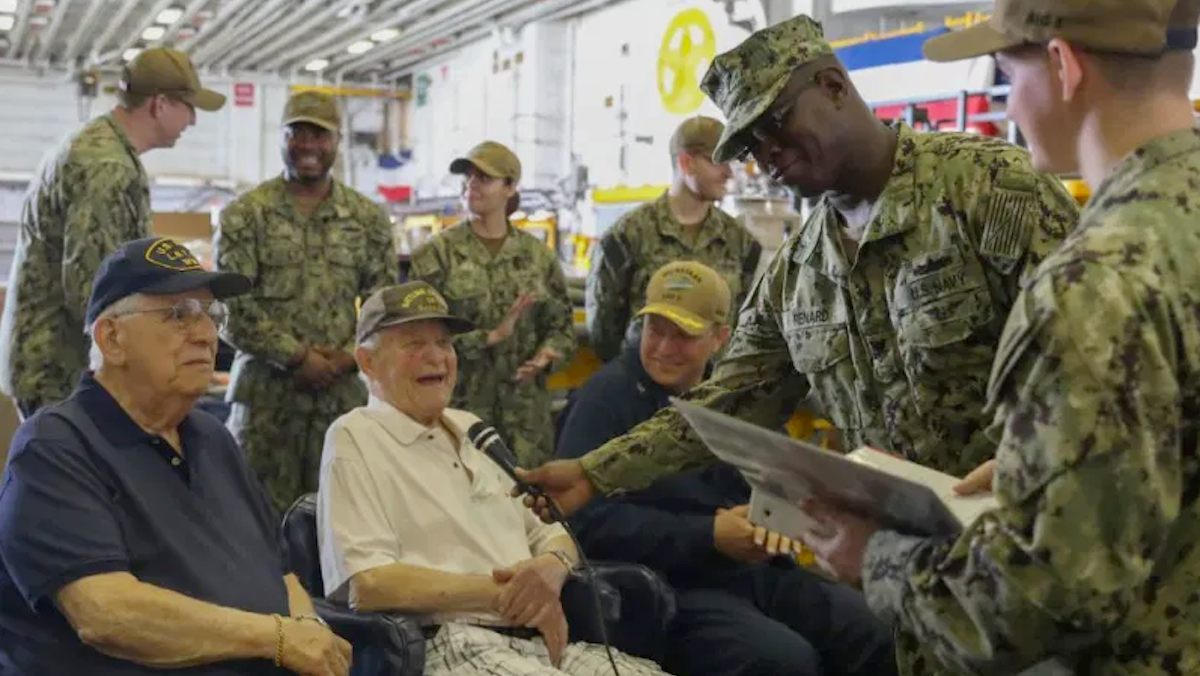 The military doesn’t always get things straight and sometimes it takes a little nudge to right a wrong. In Daniel Crowley’s case, the military took 76 years to get his records straight. And the nudge was thanks to the American Defenders of Bataan and Corregidor Memorial Society (ADBC-MS). But the 98-year old Connecticut citizen was there to be finally recognized.

On Monday, January 4, 2021, Crowley was awarded his long-overdue sergeant’s chevrons, his Combat Infantryman’s Badge (CIB), and his Prisoner of War Medal.

The ceremony was held at the Bradley International Airport/Air National Guard hanger in Windsor Locks, Connecticut, which is home to the Connecticut Air National Guard’s 103rd Airlift Wing. Gregory Slavonic, the acting undersecretary of the Navy presided over the ceremony. He was assisted by his Executive Assistant G. J. Leland, a former commanding officer of the multipurpose amphibious assault ship USS Bataan (LHD 5). The two worked with the secretary of the Army to research and confirm all the awards and promotions that Mr. Crowley had earned during World War II, including his promotion to sergeant which he was never made aware of.

The entire ceremony was filmed and was posted to the 103rd Airlift’s Facebook page. It can be seen here: http://www.facebook.com/103aw.

Crowley enlisted in the Army Air Corps in October 1940. He said that he was hoping to see the world at the government’s expense. In March 1941, he was assigned to Nichols Field, in Manila in the Philippines. When the Japanese bombed Pearl Harbor on December 7, 1941, they bombed the Americans in the Philippines as well, destroying the airfield and the aircraft stationed there. The Americans were shuttled over to the Bataan Peninsula.

Crowley served on Bataan, during the Japanese invasion of the Philippines in December 1941, as a member of the Army Air Corps. When those units were turned into the Provisional Army Air Corps Infantry Regiment on Bataan, he fought there until the Americans, out of food, ammunition, and medicine, surrendered to the Japanese on April 9, 1942.

But Crowley wasn’t done fighting. He and several other troops refused to surrender. They hid among the rocks along the shore, and by doing so, missed the horrific Bataan Death March. At night, they swam the treacherous, shark-infested waters for three miles over to the Corregidor bastion that was still fighting the Japanese. There, he fought with the 4th Marines against the Japanese until they too surrendered about a month later. Read Next: New Leaders, New Direction: Reinvented MIA Agency Impresses

The Japanese brought the prisoners back to Manila and forced them to march through the streets in what was characterized as the walk of shame. Then they were shuttled off to Camp Cabanatuan. Conditions at Cabanatuan were horrific. To escape that, Crowley and others volunteered to work to help build a Japanese airfield on Palawan Island. There, they build an airstrip using only hand tools.

Coincidentally, the remaining POWs in Cabanatuan were rescued in one of the most daring and successful Special Operations raids in our history. In January 1945, before the Japanese could execute the POWs, members of the 6th Ranger Battalion under the command of Henry Mucci raided the camp and rescued them.

In March 1944, after Crowley and the other soldiers had finished working on the airstrip, they were shipped off to Japan to provide slave labor in a copper mine.

Crowley was released from hellish captivity on September 4, 1945. He returned to his Connecticut home and family. In April 1946, he was honorably discharged from the Army at Ft. Devens, MA.

The ADBC-MS is the leading voice for Pacific War veterans and their families. It promotes education and scholarship about the POW experience in the Pacific. It supports programs of reconciliation and understanding and advocates for a Congressional Gold Medal for the POWs of Japan.

Of the 26,000 American POWs who were prisoners of the Japanese, more than 11,000 (over 40 percent), died or were murdered in captivity. By comparison, only 1.5 percent of the POWs captured by the Germans died in captivity.

In honor of Mr. Crowley and the other POWs, Connecticut Governor Ned Lamont has proclaimed January 4, Pacific War Heroes Day.

We would like to thank Mindy Kolter from ADBC-MS, who furnished SOFREP with the details of Mr. Crowley’s story. You can watch a video on Mr. Crowley below.