MIGHTY 25: Meet Nicole Malachowski, from first female Thunderbird pilot to health advocate - We Are The Mighty 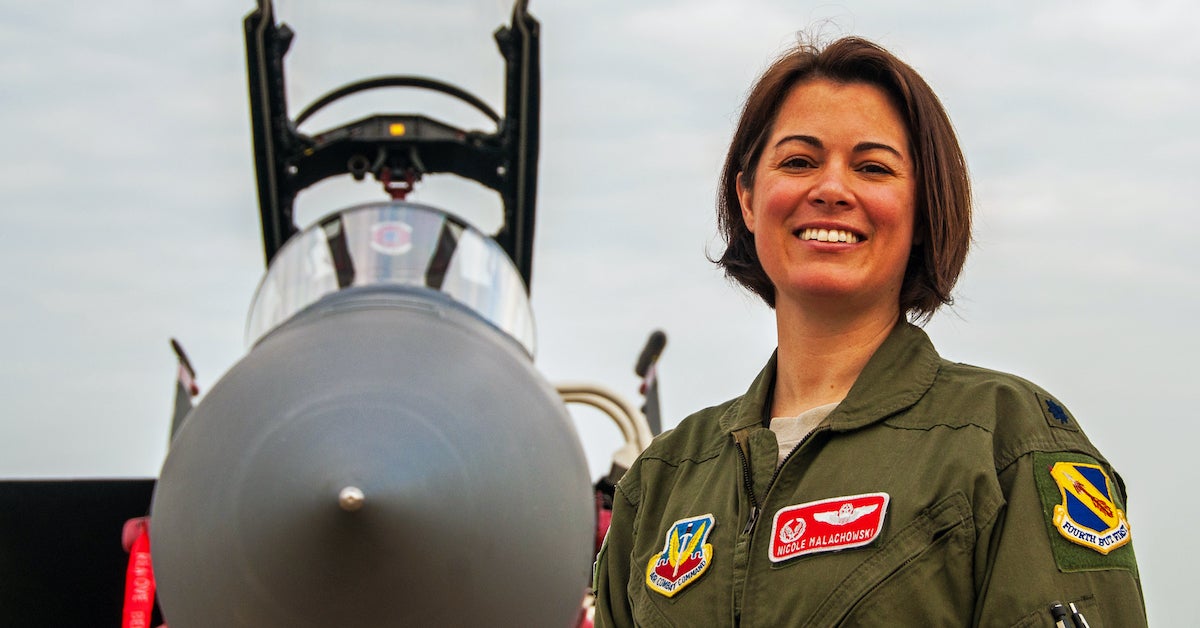 Retired Air Force Colonel Nicole Malachowski didn’t set out to make history as a female fighter pilot but… she did. As for making waves with her passionate advocacy on behalf of veterans? Absolutely on purpose.

“It goes back to 1979; I was five years old and went to a local air show,” Malachowski shared. “There was a plane flying, the F4 Phantom – a workhorse fighter aircraft in the Vietnam War. I remember when it came by… it was so loud, I could smell the jet fuel and it just shook my chest. I remember thinking – I want to be a fighter pilot someday.” What she didn’t know was at the time, women were forbidden from being fighter pilots and that only recently had women even been allowed to go to flight school at all.

Despite the challenges associated with achieving her dream, Malachowski maintained an unwavering commitment to becoming a combat fighter pilot. She joined the civil air patrol and then the Air Force ROTC, which she credits with building a strong foundation to support her focus. Her hard work paid off – she was accepted to both the Air Force and Naval Academy. “I chose the Air Force Academy because I knew my chances of getting a pilot slot were the highest,” she explained.

Despite the fact that she knew how hard she worked for it, Malachowski acknowledges that she had a privilege growing up in the family and supportive environment that she did. “Timing, luck and circumstance were on my side. It’s important to recognize that I had a lot of opportunities that a lot of people around this world are never given,” she said.

Malachowski got into flight school, became a pilot and saw her first combat time in 1999 while stationed in England during Operation Deliberate Forge. It was during this time that she met her husband Paul, who was a Weapons Systems Officer in the Air Force. When they were both sent back to the states, the wedding planning commenced.

Then, America was attacked on September 11, 2001. Their wedding was sparsely attended, as many of the guests were deployed or afraid to fly. On the day they said “I do,” the United States military dropped the first bombs in Afghanistan. It’s something she’ll never forget.

Malachowski spent the next few years teaching and leading her peers in and out of combat over Iraq. “It was during this time that I got the crazy idea to apply to be a Thunderbird,” she said with a laugh. Not only would she become a Thunderbird, she would be the first female to do so.

After two years as a Thunderbird, she was selected as a White House Fellow. This was a monumental time in our nation’s history as she bore witness to the peaceful transition of power from President Bush to President Obama. “I was just a Major in the Air Force, I had no business being where I was,” she confessed. During her time there, Malachowski advocated for and was able to secure the Congressional Gold Medal for the Women Air Force Pilots (WASPs) of World War II. This was personal to Malachowski as she was adamant about correcting a wrong and ensuring that these women received the recognition, benefits and credit for their service to the nation.

Malachowski wasn’t done yet. Over the next few years she shocked the Saudi Arabian government by showing up to brief their military’s chief of staff. “I briefed everything in my uniform and the reception in the room was mixed. But every question they had I could answer because I was credible and I was good,” she shared. At the time, she was responsible for the largest foreign arms sale in the United States.

She went on to attend the Naval War College, which was male dominated. Two days before graduation, she found out she was the honor graduate. Malachowski was the first Air Force officer to hold that position in its 250 year history. Notable assignments followed but one that she found incredibly rewarding was commanding 333rd Fighter Squadron. What people don’t know is that when she accomplished all of this, she was critically ill from a tick borne illness.

Unfortunately, Malachowski was misdiagnosed with Lyme disease. Unbeknownst to her or her medical team, she had three separate tick borne pathogens running through her body. “That would set me on a horrific four years of medical craziness,” she explained. Two years into her illness, she was asked to be the Executive Director of the Joining Forces program created by then First Lady Michelle Obama and Second Lady Dr. Jill Biden.

Although she was asked to stay on, she became too sick. “I woke up one day and I was basically paralyzed. I ended up having an infectious lesion on my brain stem,” Malachowski shared. What she wasn’t aware of at the time was that tick borne illness, if not treated properly and immediately, leads to lifelong disability. It was a fact she was never made aware of as she crawled through the tick laden grounds of North Carolina during survivor training.

It’s a fact she is announcing far and wide to veterans and military families in order to prevent the debilitating illness she experienced herself. “Lyme disease is just the tip of the iceberg of what North American ticks can carry,” Malachowski explained. During her transition out of the Air Force, she put all her cards on the table – including writing to military leadership to plead her case.

The Chief of Staff of the Air Force directed the foundation of a “Task Force on Support to Airmen with Complex Medical Conditions” and appointed her to it. Malachowski was also asked to serve on the Department of Health and Human Services Tick Borne Diseases Working Group.

When asked what she wants people to take away from her story, she smiled. “I want people to realize they have the power to change things for the better. For themselves, their families and their communities. Never accept the status quo because it’s easier,” she said. “The runway behind you is always unusable. All you have is the runway in front of you.”