Finding beauty in the 'Boneyard' - We Are The Mighty

Finding beauty in the ‘Boneyard’ 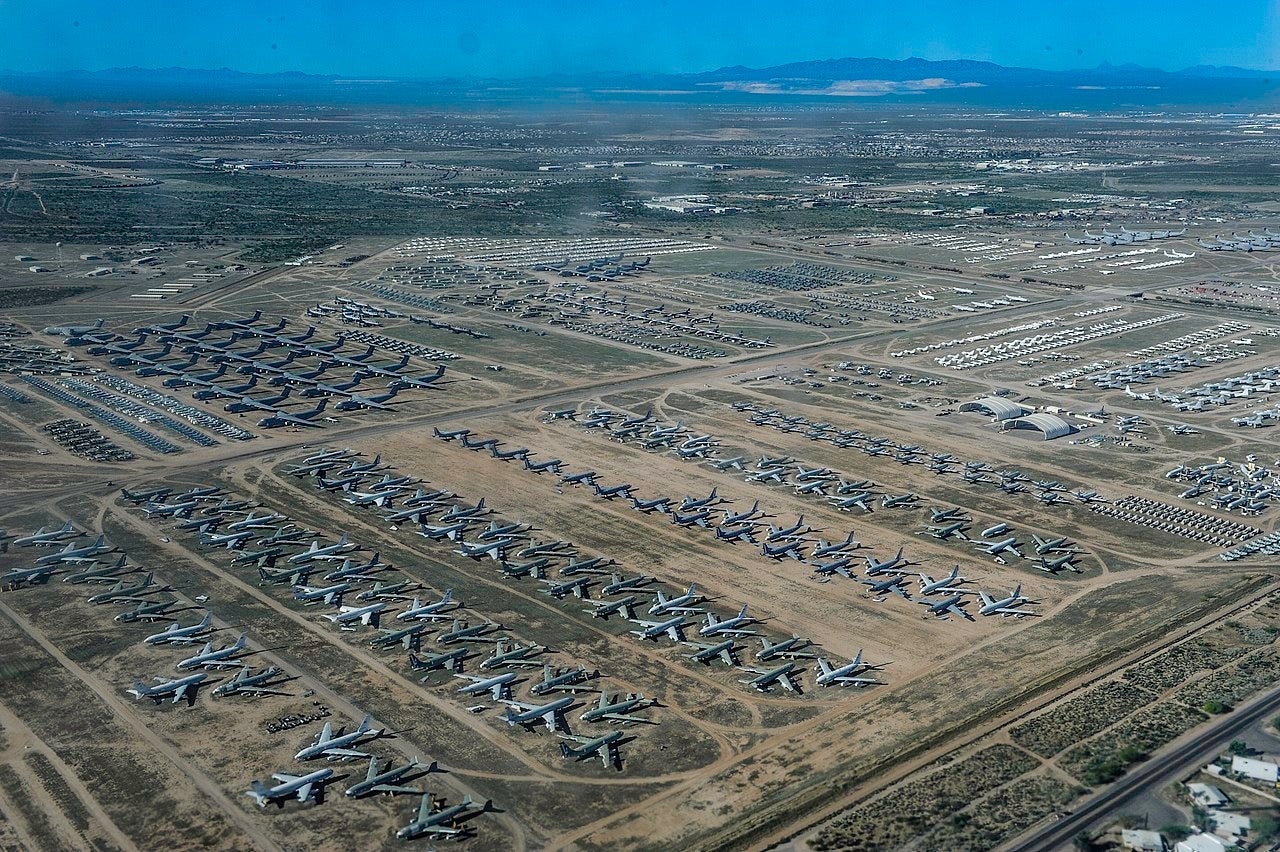 150327-N-MV308-544 .DAVIS-MONTHAN AIR FORCE BASE, Ariz. (March 28, 2015) An aerial view of retired military planes taken from aircraft 916, a P-3C Orion maritime patrol aircraft from the Golden Eagles of Patrol Squadron (VP) 9, as it circles the 309th Aerospace Maintenance and Regeneration Group (309 AMARG) at Davis-Monthan Air Force Base in Tucson, Ariz. The 309 AMARG is responsible for the storage and maintenance of aircraft for future redeployment, parts, or proper disposal following retirement by the military. (U.S. Navy photo by Mass Communication Specialist 3rd Class Amber Porter/Released).

Commonly referred to as the “Boneyard,” the 309th Aerospace Maintenance and Regeneration Group at Davis-Monthan Air Force Base, Ariz., contains about 5,000 retired military aircraft throughout 2,600 acres.

Crews at the Boneyard preserve aircraft for possible future use, pull aircraft parts to supply to the field, and perform depot-level maintenance and aircraft regeneration in support of Air Force operations. | U.S. Air Force video/Andrew Breese

An F-86 Sabre sits forlorn in the field, in the shadow of its former glory. The old plane is in parts now, its wings detached and lying beside it. The canopy is missing, along with most of the interior parts of the cockpit, and the windshield is shattered – now bits of broken glass hang precariously from a spider web of cracks.

To retired Col. Bill Hosmer, it’s still beautiful. He walks around the old fighter and stares in admiration. He slides a hand over the warped metal fuselage and a flood of memories rush over him.

“I haven’t been this close to one of these in years,” he says. “Of course, that one was in a lot better shape.”

So was Hosmer. Time has weathered and aged them both, the plane’s faded paint and creased body match Hosmer’s own worn and wrinkled skin. Even the plane’s discarded wings stand as a metaphor for Hosmer’s own life now – a fighter pilot who can’t fly, standing next to a fighter jet with no wings.

Age has grounded them both, but they share something else time can’t take away: A love of flight.

“Retiring from flying is not an easy thing,” Hosmer said. “Flying is a bug you just can’t shake.”

Hosmer has done his share of flying, too. He spent more than 20 years in the Air Force, where he flew the F-86, the F-100 Super Sabre and the A-7 Corsair II. He even served a stint with the USAF Thunderbirds, the service’s air demonstration team that chooses only the best pilots.

The Sabre has always had a special place in his heart, though. It was the first plane he flew and his favorite.

“We’ve shared a lot of time together, me and this plane,” he said, patting the plane’s weathered hulk.

Ironically, Hosmer’s favorite plane is also the one that almost made him give up flying. He was in pilot training, learning how to fly the F-86, when he crashed one. The physical injuries weren’t all that bad – a busted mouth, some fractured bones and multiple bruises – and he healed from them without issue.

The damage to his psyche, though, that was a different story.

“I was scared to fly for a while after that crash,” he said. “It took me a long time to get the courage to get back in the cockpit.”

Eventually, his love to fly overtook his desire not to and he hopped back in the cockpit and rekindled his love affair with flight.

So, looking at the old F-86, Hosmer doesn’t see a broken, battered and discarded jet; he sees past glories, feels loving memories and is saying hello to an old friend.

“I made a living flying this plane,” he said. “It seems like just yesterday I was in the cockpit. But, it was really a long time ago.”

Like Hosmer’s memories, the Sabre is also a thing of the past. The plane is replaced with newer, sleeker and more technologically advanced airplanes, and those few that do remain are typically found in museums and airshows.

The one Hosmer is standing next to is different. This one now sits as part of the 309th Aerospace Maintenance and Regeneration Group at Davis-Monthan Air Force Base, Ariz. Commonly referred to as “the Boneyard,” the AMARG is basically a 2,600-acre parking lot and storage facility for about 5,000 retired military aircraft.

“Parts,” said Bill Amparano, an aircraft mechanic with the 309th AMARG. “These planes offer parts to the fleet. If a unit can’t find a replacement part for one of their aircraft, they’ll send us a request and we’ll take the part off one of our planes and send it to them.”

In other words, the AMARG is like a giant “pick-and-pull” for the Air Force, offering hard-to-find parts to units around the world. And, while it’s said the Boneyard is where planes go to die, it’s the opposite that’s true.

When a plane arrives at the AMARG, it goes through an in-depth preservation process. Guns are removed, as are any ejection seat charges, classified equipment and anything easily stolen. Workers then drain the fuel system and pump in lightweight oil, which is drained again, leaving an oil coating that protects the fuel system.

A preservation service team then covers all the engine intakes, exhaust areas and any gaps or cracks in the aircraft with tape and paper and plastic. This job can take about 150 hours per aircraft.

Larger openings, such as bomb outlets and large vents, are then covered with a fiberglass mesh to keep out birds.

“If you don’t catch them in time, they can really do some damage,” said Jim Blyda, also an aircraft mechanic with the group.

This preservation process doesn’t just prepare the planes for storage; it also keeps them ready. The fully preserved planes can be called back into military service, be used as firefighting planes or even be sold to customers.

“Although some of them look like they are sitting here dead, if we reverse the process, in a couple of days, they are ready to roll,” Amparano said.

The AMARG also performs depot-level maintenance and aircraft regeneration in support of Air Force operations. Each year, the Boneyard receives and teams preserve nearly 400 aircraft, dispose of nearly another 400 aircraft and pull and ship some 18,000 parts.

Even the AMARG’s location serves a purpose. Because of Tucson’s low rainfall, low humidity and high-alkaline soil, corrosion and deterioration are kept to a minimum.

“The weather here is really perfect for storing all these planes,” said Col. Robert Lepper, 309th AMARG commander. “So if we need them, they’re ready. Some have been sitting here for decades.”

For Hosmer, this is a good thing. Without the AMARG and its preservation of the thousands of planes confined within its fences, he would not be able to stand in a field, rubbing his weathered hands over the warped, aged fuselage of an old F-86.

Neither he nor the jet fly anymore, but just the sight of the old fighter brings back memories Hosmer had long since forgotten.

Remembering them now, the memories are brought back to life – just like many of the planes within the AMARG are waiting silently, patiently, to do.

Watch this video from Airman Magazine to take a tour of the Boneyard: