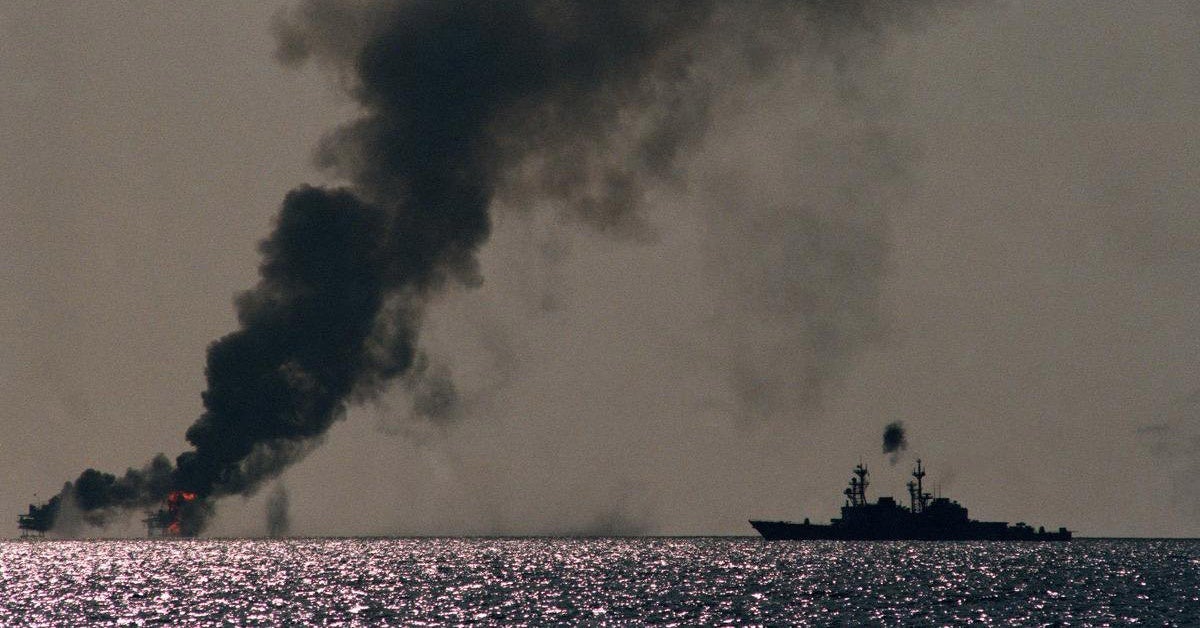 The Iranian Navy sure does talk a big game for the sheer number of times it got slapped around in its home waters. When Iranian sailors captured U.S. Navy sailors in 2016, the usual response would have been a short, potent facepunch from a nearby carrier group. When President Obama opted not to slap them around, what should have seemed like a close call instead appears to have artificially inflated some Iranian egos, because traditionally, Iran is not good at Navy things.

Iran has been hit or miss on the water (usually miss) since they lost to the outnumbered Greeks at Salamis in 480 BC. Its biggest naval win came against Iraq on Sept. 28, 1980, a day they still celebrate as “Navy Day” because no other engagement would qualify. Ever since, Iran has been threatening anyone within earshot with its aging, rusted patchwork of garbage scows it calls a navy.

During World War II, the Allied powers thought neutral Iran was more likely to aid the Axis powers than the allies when push came to shove. Since Iran’s rich oil fields were not something anyone wanted in Hitler’s hands, the Soviets and the British Empire invaded Iran in August 1941. The British Commonwealth ships steamed into Abadan Harbor and promptly lit up the Iranian fleet, killing its leadership and deposing the Shah. The two allied powers then divided the country between them.

After Iran crippled the Iraqi Navy during the early days of the Iran-Iraq War, the Iranians pretty much had free rein to wreak as much havoc as they wanted on Iraqi shipping – even if those ships weren’t flagged as Iraqi. The Iranians began targeting tankers and container ships flagged as neutral countries in an effort to choke Iraq into submission. Pretty soon, other countries were reflagging their ships as American, both to deter the Iranians from attacking or laying mines and benefitting from U.S. protection.

The Iranians did not stop mining the Gulf, so the United States began setting up oil platforms as maritime staging areas for special operations missions. Operating from these bases, the Navy took down a number of Iranian minelayers while protecting international shipping lanes.

U.S. forces attacked and burned Iranian oil platforms after Iran fired a missile at a Kuwaiti tanker, hitting it and wounding dozens of sailors. The Navy determined the attack came from an otherwise-unoccupied oil platform, which they next surrounded, boarded, and destroyed – using both Navy SEALs and accurate fire from four destroyers as well as aircraft.

The special operators who boarded the platforms also seized valuable classified intel, as the platforms were controlled by the Revolutionary Guards Corps.

In 1988, it wasn’t a flagged merchant who hit an Iranian-laid mine. This time it was a US Navy ship, the USS Samuel B. Roberts. Unfortunately for Iran, Ronald Reagan was still President, and the USS Enterprise carrier group was in the area. An entire battalion of United States Marines assaulted an oil platform being used to stage Iranian attacks in the Gulf. When the platform tried to fire on the Americans, they were punished for the effort from US Navy destroyers and Cobra helicopters.

The Iranians responded by sending an Iranian missile boat, the Joshan, straight at the U.S. fleet. When Joshan missed that shot, the American fleets overwhelmed the ship with missiles and guns, sending her to the bottom. Meanwhile, Iranian aircraft and destroyers joined the fray, one destroyer was sunk the other was heavily damaged, and the Iranian fighters were no match for US Navy A-6 Intruders.