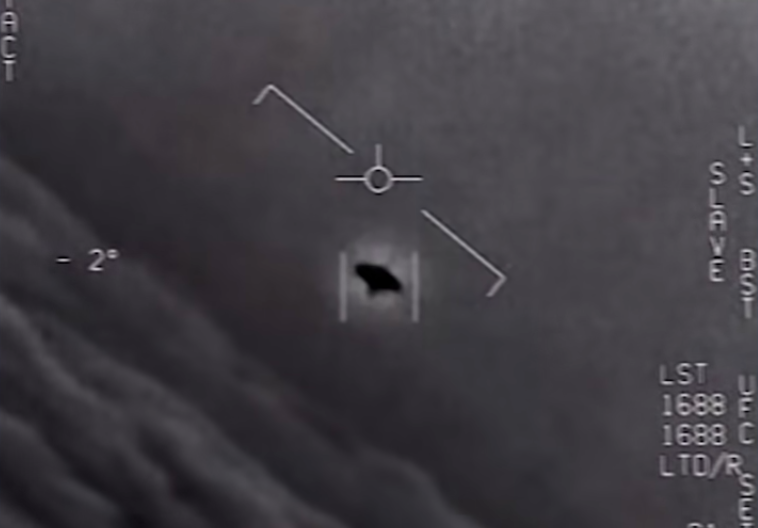 On Sunday, February 21st, at approximately 1:19 PM CST, the pilot of American Airlines Flight 2292 was added to the ranks of those who have had an encounter with an unidentified flying object, or as they tend to be known today, an Unidentified Aerial Phenomenon (UAP).

The pilot, nearing the end of a flight from Cincinnati to Phoenix, witnessed a “cylindrical object” fly over his Airbus A320 near Clayton, New Mexico. He radioed air traffic control in Albuquerque with this message:

The transmission was recorded by Steve Douglass, an investigative journalist, photographer and “self-avowed Stealth Chaser,” as his blog, Deep Black Horizon describes. Douglass has a room full of monitoring equipment that would be the envy of most small airports, as can be seen in his interview with KVII out of Amarillo. Douglass actually found the 20-second transmission while searching for audio of a mayday call from a Denver flight that had an engine catch on fire.

“It was a pure coincidence,” Douglass told The Arizona Republic. “I was just as surprised as everybody else was.”

He said a bit of excitement and elevation in the pilot’s voice caught his attention. Listen to the audio here:

American Airlines was initially dismissive of the claims about the intercepted message after an inquiry by Tyler Rogoway of The War Zone, but then confirmed the incident about 48 hours later with a brief statement:

“Following a debrief with our Flight Crew and additional information received, we can confirm this radio transmission was from American Airlines Flight 2292 on Feb. 21. For any additional questions on this, we encourage you to reach out to the FBI.“

The Federal Aviation Administration (FAA) followed that up on Wednesday:

“A pilot reported seeing an object over New Mexico shortly after noon local time on Sunday, Feb. 21, 2021. FAA air traffic controllers did not see any object in the area on their radarscopes.“

While the parties involved are predictably tight-lipped after such a dangerous event at 36,000 feet, these statements do tell us a couple of things, as noted by Rogoway. The FAA’s statement indicates that this isn’t simply a mishap where two aircraft ended up in the same airspace, and American Airlines referring questions to the FBI adds quite a bit of intrigue, suggesting the need for an investigation beyond the resources of the FAA.

So what was it? For what it’s worth, the spokespeople for all military bases in the area (White Sands Missile Range, Holloman AFB, and Kirtland AFB) have no explanation for what happened. No missile tests and no military flights were in the area according to the military, and Douglass has a log of all activity on Deep Black Horizon that confirms this. The FAA also having nothing on radar pushes this into UFO territory. The Southwest United States is obviously no stranger to bizarre occurrences and unexplained aircraft. A very similar unsolved air mystery was witnessed by multiple pilots over the Sonoran Desert in southern Arizona almost three years ago to the day.

Go back a few more years, to five Navy F/A-18 pilots who told the New York Times about mysterious objects that had “no visible engine or infrared exhaust plumes, but that they could reach 30,000 feet and hypersonic speeds,” as reported in the 2019 article. One encounter nearly resulted in a collision and prompted an after-action report from an unnamed pilot.

“These things would be out there all day,” Lt. Ryan Graves, one of the Super Hornet pilots, told the Times. “Keeping an aircraft in the air requires a significant amount of energy. With the speeds we observed, 12 hours in the air is 11 hours longer than we’d expect.”

The videos above were released by the Pentagon last year to “clear up any misconceptions by the public on whether or not the footage that has been circulating was real,” but that seems to have only whetted the appetite of UFO enthusiasts more. Fortunately, a bill that was introduced by Florida Senator Marco Rubio, the Intelligence Authorization Act, was passed last July and includes provisions for the Department of Defense to reveal what they know to Congress about unidentified flying objects by this summer. It is anyone’s guess how much might be revealed, but it definitely bears watching.

While the American Airlines pilot’s description of what he saw is very brief, it is plausible that the “long, cylindrical object” he saw was the same as these “Tic-Tac-shaped” vehicle that these other pilots have described. That said, more details are definitely needed, and there still may be a much more reasonable explanation for the incursion. Let the debate begin as to whether this is extra-terrestrial life, a military smokescreen, or a completely separate scientific phenomenon. Regardless, it is another fascinating event that’s added to the catalogue of the unexplained, and another potential piece of the UFO puzzle that might be closer to being solved soon.