Navy SEAL community loses another legend: Bob 'The Eagle" Gallagher - We Are The Mighty 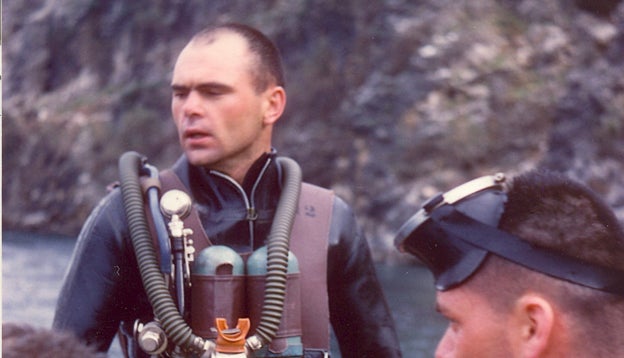 In March of 1968, SEAL Team TWO Detachment Alpha had been operating in the area of My Tho, in the Mekong Delta of Vietnam, since the previous year. The commander of 7th platoon, Pete Peterson, along with assistant platoon commander Ron Yeaw, led SEAL operations out of My Tho, targeting Viet Cong forces in the area. The platoon’s senior enlisted man was SEAL Senior Chief Robert T. Gallagher, who Peterson described recently — on the occasion of Gallagher’s passing away this month at the age of 83 — as SEAL Team TWO’s gold standard as far as how to be a warrior in those early days of the SEAL teams.

According to the citation that accompanied Gallagher’s award of the Navy Cross — the nation’s second-highest award for valor — on March 13th of that year, Gallagher distinguished himself while acting as the Assistant Patrol Leader for a night combat patrol of 7th platoon SEALs. The patrol infiltrated at least two miles into a Viet Cong battalion-sized base camp area and located a barracks building housing approximately 30 armed Viet Cong insurgents. Gallagher and two other SEALs, while attempting to infiltrate the barracks, were discovered by a sentry, and the whole patrol became engaged in a fierce running firefight with the superior force.

During the battle, both SEAL officers Peterson and Yeaw were wounded, as was the platoon’s Vietnamese combat guide and interpreter, Minh. Gallagher took command of the entire force, and though suffering a number of his own wounds, including in both legs, managed to lead the patrol a half-mile through enemy territory, with wounded SEALs in tow, to an open area that would facilitate helicopter support. Gallagher then repeatedly exposed himself to enemy fire while coordinating helicopter attack and evacuation assets.

Wounded yet again, Gallagher continued to lead the patrol, and through his actions, facilitated their safe extraction, including all of the wounded members, each of whom survived the operation.

Platoon Commander Peterson is one of those who survived that operation, and who also wrote the citation for Gallagher’s Navy Cross, and who is still with us today. He recently recounted how Gallagher was approached about the award many years later, and the possibility of it being upgraded to a Medal of Honor.

According to Peterson, Gallagher responded by saying that “if I was not deserving of a Medal of Honor then, nothing is different now.”

Peterson went on to recount how Gallagher, after he felt he had recovered sufficiently from his wounds received that night in the Mekong Delta, snuck out of the Naval hospital in Yokosuka, stole a navy chaplain’s uniform, and hopped a flight back to My Tho to rejoin the platoon. Gallagher would serve five total combat tours in Vietnam, according to the National Navy UDT-SEAL Museum, and was also awarded the Silver Star, two Bronze Stars, and five Purple Hearts for his actions there.

Gallagher was also a part of one of the SEAL Teams’ first Mobile Training Teams, in 1962; an early manifestation of what would later come to be known as the Foreign Internal Defense (FID) mission. In that role, as a Chief Petty Officer, he helped train the Turkish navy’s very first frogmen, and according to multiple of Gallagher’s former teammates, the man remains revered within the Turkish SEAL community to this day. They call him the “Father of the Turkish UDT,” according to one former teammate.

Rick Woolard, a former ST-2 teammate of Gallagher, and later Commanding Officer of the team, described how Gallagher acquired his nickname, “The Eagle.” According to Woolard, Gallagher’s gaze was piercing, and behind his eyes was a fierce intensity. Gallagher himself told Woolard that it was because he had unusually sharp vision, both day and night, but Woolard was sure it was more than just that.

As the SEAL community continues to lose its last few remaining Vietnam-era heroes, it is worth paying special tribute to this icon of SEAL Team TWO, and the Teams writ large. Along with Rudy Boesch, few other men stand as one of the earliest legends of the then-new unit of SEAL Team Two “devils with green faces.” Fair winds and following seas, shipmate.