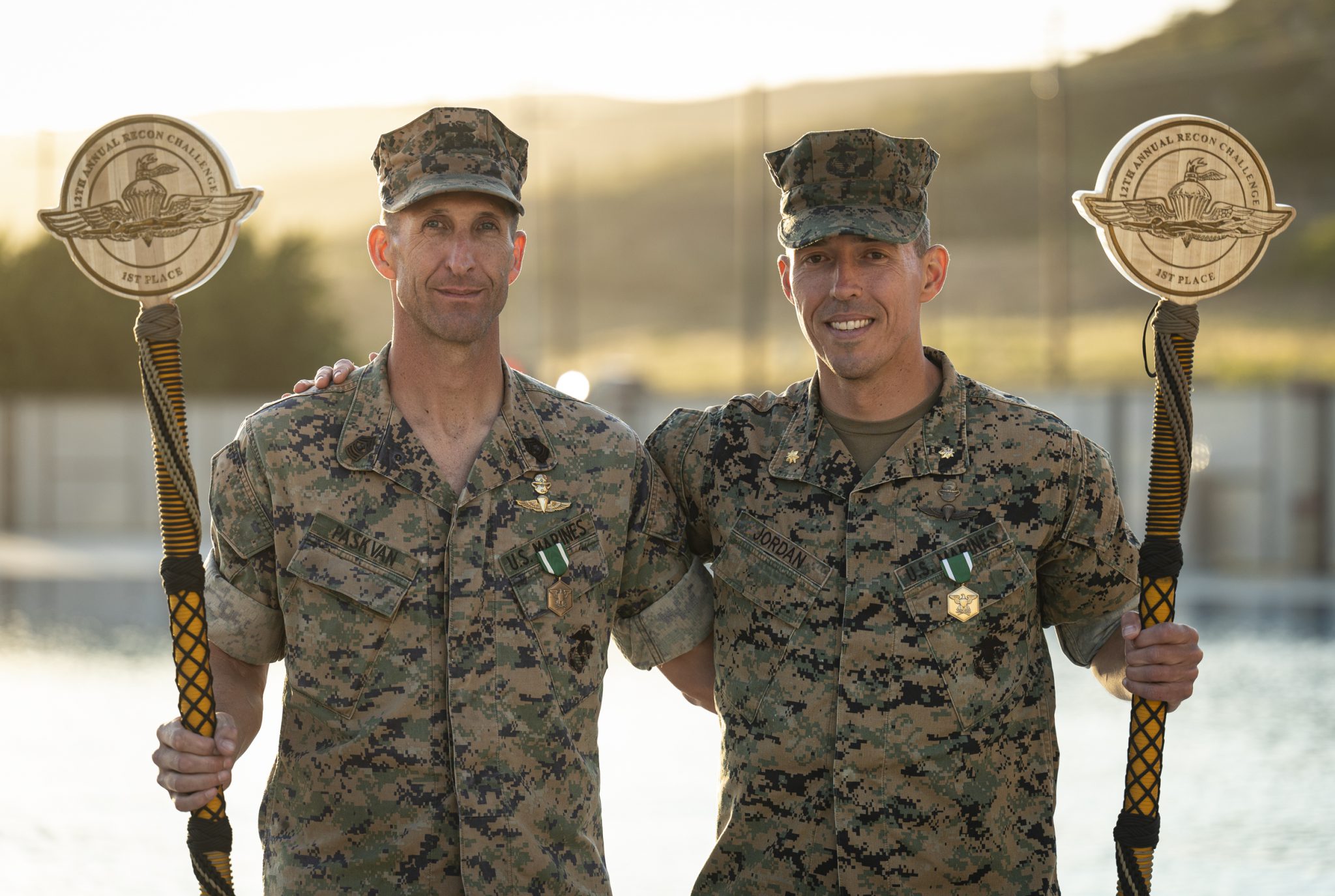 Silhouetted palm trees dotted a creeping sunrise to the east, and a waning moon hung in the black sky above the Pacific Ocean at 5 a.m. Friday morning as 22 current and former Reconnaissance Marines stood on the San Onofre Beach shoreline aboard Camp Pendleton, California, waiting to start a grueling day.

“Three! Two! One!” a Marine yelled, starting the 2021 Recon Challenge.

Competing in two-man teams, the Marines took off over sand and slick rocks, rifles slung across their backs and carrying rucksacks weighing at least 50 pounds. Without hesitation, they waded into the surf, shrinking smaller and smaller until they disappeared in the waves.

The 1,000-meter ocean swim was an initial baptism to kick off the 2021 Marine Recon Challenge.

Competitors put their strength and endurance to the ultimate test during the punishing, daylong contest. Each Recon Marine wore the name of one of his fallen brothers on his pack, and the Gold Star families of the fallen were on hand to observe the commemorative event throughout the day. They cheered competitors on at several of the challenge’s 10 events and welcomed the Marines at the finish line.

The teams raced through Camp Pendleton’s hilly terrain, rucking from event to event and logging roughly 25 miles with many steep climbs along the way. They overcame obstacles such as underwater knot-tying, casualty evacuation drills, and live-fire marksmanship drills. While the morning started out cool, the Southern California sun beat down brutally, and afternoon temperatures reached as high as 90 degrees.

“It is an honor to put our bodies through that grueling pain and shared suffering so that we remember our fallen and feel them with us as we move through that route,” said Gunnery Sgt. Frank Simmons, an instructor with Reconnaissance Training Company (RTC) and one of the lead coordinators for the 2021 Recon Challenge.

Team 8, consisting of RTC Executive Officer Capt. Benjamin Lowring and Basic Reconnaissance Course Instructor Staff Sgt. Andy Meltz, took a strong lead from the beginning of the competition, only to be overtaken late in the day. The team took a wrong turn on their way to the eighth of 10 events, losing precious time and allowing Team 11 to close distance.

The second-to-last event of the challenge sealed Team 8’s fate. The Marines struggled with the task of moving a massive tire from a 7-ton truck from the deep end of the Camp Horno Pool up and over a 9-foot ledge to the shallow end. The Marines resurfaced over and over, experimenting with different strategies and techniques before finally succeeding after more than 15 minutes. By the time they managed to heave the tire over the ledge, RTC Senior Enlisted Advisor Master Gunnery Sgt. Cory Paskvan and RTC Commanding Officer Maj. Morgan Jordan — Team 11 — had caught up.

After quickly shedding their rucks and stripping down to swimsuits, Team 11 jumped in the pool and went to work. They wasted no time, using a rope to pull the tire to the surface and bobbing it across the water with ease. They hurriedly applied a topical aid to sore muscles, dressed, and stepped off in hopes of a come-from-behind victory. A poorly timed leg cramp helped them leapfrog Team 8, and Paskvan and Jordan took the lead going into the final stretch.

Once in the lead, Team 11 maintained a strong but manageable pace as they made the final push across the roughly 5 miles of hilly terrain that remained between them and the finish line.

Nine hours and 27 minutes after first plunging into the cold Pacific, the pair walked under the Recon Challenge banner and hung Lt. Col. Kevin Michael Shea’s dog tags on a battle cross staged there. The Marines’ loved ones, fellow service members, and the honored Gold Star family members cheered wildly.

With a combined age of 84, Paskvan and Jordan were the oldest team in the challenge, competing against Marines as young as 25.

“There’s not a lot of competitors coming out to run it this late in their career,” Jordan said.

Scott Gardner, a retired Force Recon Marine, was the oldest competitor in the challenge at 47. Gardner and his teammate, Staff Sgt. Gabe Gillespie, finished the event toward the middle of the pack.

Among the competitors’ many impressive feats was the 3rd place finish of Gunnery Sgt. Joshua Kovar and Marine Recon veteran George Briones of Team 10.

Kovar, who serves as a Ranger Instructor at the Army’s Airborne and Ranger Training Brigade, finished third in the Recon Challenge just two weeks after finishing second overall in the 2021 Best Ranger Competition, an annual US Army competition that’s comparable to the Recon Challenge and considered one of the most physically rigorous endurance events in the military. Competitors are tested in a nonstop series of events that are meant to push them both physically and mentally while judging their ability to execute a variety of military skills.

“Gunnery Sgt. Kovar embodies the Recon Creed by forever striving ‘to maintain the tremendous reputation of those who went before’ him and ‘exceeding beyond the limitations set down by others,’” Simmons said, praising Kovar’s performance in the challenge.

As senior leaders of RTC, Paskvan and Jordan took on the challenge as an opportunity for them to lead by example and “defy the odds.”

“It’s been a long time coming,” Paskvan said. “I’ve been coming out here since 2015 trying to win one of these. I’ve gotten a fair amount of second places, but this is the first time I’ve actually won.”

Defying the odds, taking home commemorative paddles, and shaking the hand of retired Maj. James Capers Jr., a legend of the Marine Corps’ elite Force Reconnaissance community, are all experiences the winners won’t soon forget. But the competitors and organizers said the real reward is honoring the fallen.

Paskvan said he’s served with many of the fallen Marines whose ID tags competitors carried during this year’s challenge and in challenges past.

Even more humbling was knowing Shea’s widow was waiting at the finish line. After completing the challenge, Paskvan and Jordan were able to give her the flag they carried throughout the race in remembrance of her husband.

“It’s not every year that you get out, make a relationship with a family that you’re running on behalf of,” Jordan said. “Really, we do it for them.”