The Mother Teresa of recreation therapy has retired 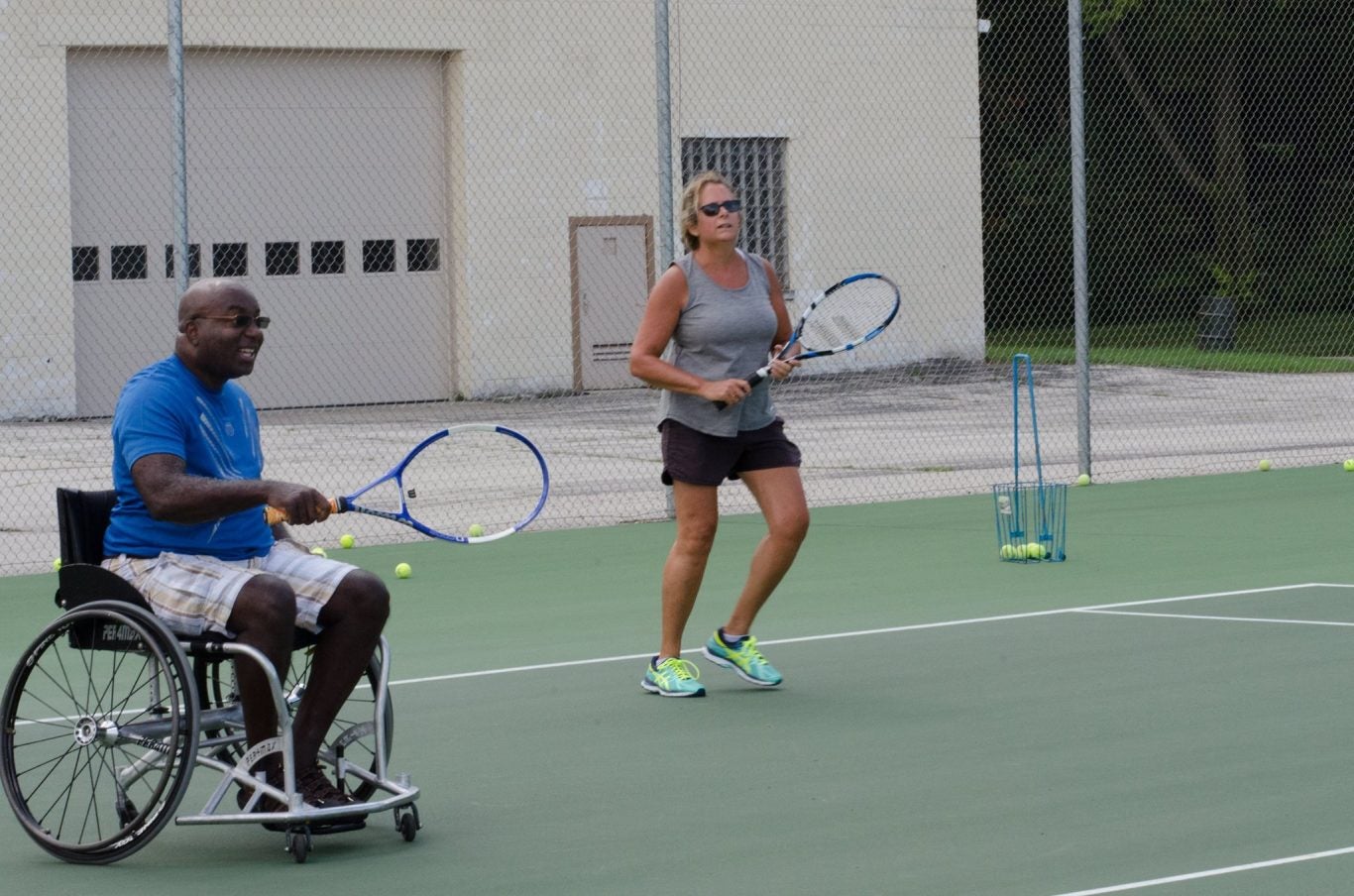 Joyce Casey is all smiles while trying out adaptive skis at the National Disabled Veterans Winter Sports Clinic.

Those are some of the ways Milwaukee VA recreation therapist Joyce Casey has been described.

But Mother Teresa has retired.

Casey, 62, who has been at the Milwaukee VA for 15 years, called it quits Feb. 26. The 62-year-old and her husband are set to become Wisconsin snowbirds starting in March.

“It’s been a great experience,” she said. “It’s like a family here, and I’ll miss Veterans and all the fun times we had.”

Casey broke a lot of ground at the Milwaukee VA, gaining national prominence in the push to get paralyzed Veterans up and moving through adaptive sports. She pushed them to try just about everything, from fishing to downhill skiing.

And the Veterans are glad she did.

“Over a decade of being involved in the VA system and wheelchair games, I’ve met recreation therapists all over the country,” he said. “Everyone knows Joyce, and her team always does the best.”

Currier’s story – injured in a freak truck accident in the U.S. after surviving the first forays of the Gulf War, he was on the verge of suicide before discovering adaptive sports  – shows how Casey set him and many other bitter and despondent paralyzed Veterans on the road to a better life.

“I might have been a young punk when I met her, and she did a great job of dealing with me,” Currier said. “She struck that perfect balance of patience and impatience, making me accountable and also making me excited to do things in adaptive sports.

“I’m a totally different person now. When I met her, I wasn’t involved in adaptive sports at all, and now I run an organization devoted to it. She connected me with a great group of people to help push me along the way.”

“She has touched so many Veterans’ lives,” said Erinn Kulba, a fellow recreation therapist in SCI. “You can see Veterans light up when they are around her. She’s the reason they have the ability to maintain the quality of life they want.”

Casey knew early on that helping people was one of her strong points.

During school, she spent summers working at a swimming pool where she taught swim lessons to kids and adults who had a fear of water or other problems.

“She’s been like a mom to me. She takes you under her wing, and she gets you to feel like you’re a normal person, and you learn to do things differently.”

“I would always take the heavy hitters. That didn’t bother me,” she said.

One of her jobs at the camp was providing leisure-time programming for the campers, which included organizing a talent show.

“It was just really cool,” she said. “One thing just kind of led to another, and rec therapy just seemed like a good fit.”

That led her to the University of Iowa and its recreation therapy program. While in college, she spent time in a program that helped children and young adults with self-care and also assisted at a camp for boys who stuttered.

She interned in Omaha, Neb., and worked at a number of hospitals in Nebraska, Texas and Virginia before coming to Milwaukee in 2006.

At that time, SCI was on the 10th floor of the hospital, which was not ideal.

“I hated it,” she said. “I was just dropped off on the 10th floor and had to figure it out. I didn’t even know what a handcycle was.”

But by talking with Veterans and corresponding with other recreation therapists across the country, she soon figured it out.

BraveHearts, a therapeutic horse-riding program, was her first foray for the Veterans, but others soon followed, including Guitars 4 Vets and Team River Runner.

Before long, Casey’s Veterans were involved in all manner of adaptive sports.

Those involved became a team, and the positive reactions reverberated through the community of paralyzed Vets. As more Vets became involved, they encouraged others. The outings became commonplace.

“There was a big influx (of paralyzed Veterans) at the time, from the Iraq and Afghanistan generation, and we were a difficult group to deal with,” Currier said. “She did a great job. She was more like a friend. We all looked up to her, and the way she dealt with us was pretty spectacular.”

“You have to have good communication skills with the guys, and she would talk to you like a big sister, a mom, a friend – sometimes a psychologist,” he said. “She knew how to talk with people.”

“She’s been like a mom to me,” said Veteran Randy Riek. “She takes you under her wing, and she gets you to feel like you’re a normal person, and you learn to do things differently.”

Casey found a kindred spirit in Lee, also a believer in adaptive sports.

“We clicked from the very get-go,” he said. “She could read my mind. Whatever needed to be done, she got it done, and it was done right.

“The Vets really benefited from her, and she started a lot of stuff at the national level. She started a movement.”

“When I think about how this program really took off, I feel like the stars were aligned,” Casey said. “Dr. Lee was very supportive and very instrumental.”

Before long, a new facility was built for SCI, which gave the recreation therapy program more resources in addition to the groups and organizations Casey connected with in the community.

“My job was just connecting the dots between the Veterans, the community and whatever that Veteran liked to do, whether it was golf, fishing or trapshooting,” she said.

Those outpatient programs blended with the work other therapists do with inpatients, because the goal of therapy is to get patients out of the hospital and back in their homes.

But keeping the Veterans active once the return home is key, Casey said.

“A big part of what we do is seeing that rehab process out in the community, so that when they get discharged, they get involved in some sort of activity, rather than go home and put on weight or make some unhealthy lifestyle choices,” she said.

Recreation therapy is easily misunderstood, Casey said, because it looks like people out having fun. But the outings require meticulous planning, help from volunteers, and a variety of special equipment and transportation.

In addition to the logistics, the therapists have to meet the physical and mental needs of the Veterans, many of whom are doing something well outside their comfort zone.

“She has brought such awareness to spinal cord and adaptive sports. Everyone knows her as being the therapist who gets Vets up and on the move after their injuries.”

“You really need to know your equipment and the level of injury of your Veterans because you want to set them up to have a successful experience,” she said.

“There’s a learning curve for the Veterans… but when they get it figured out, it’s amazing. That spark comes back, and they find that little flame in their soul to pursue something that gives them enjoyment… It’s priceless.”

“I volunteered in SCI 11 years ago, and after meeting the team, I decided to pursue my master’s so I could do what she does,” Kulba said.

“She has brought such awareness to spinal cord and adaptive sports. Everyone knows her as being the therapist who gets Vets up and on the move after their injuries.”

The COVID-19 pandemic effectively quashed all the outings the adaptive sports Veterans enjoy.

It hurt Casey as well – being cooped up in a building is not her strong suit. And she admitted the past year helped push her toward retirement.

“It’s been so hard to not be able to come in and do things,” he said. “We used to tie flies, do woodworking, play bocce ball, go bowling.”

That programming will come back eventually, but Casey said the restart may be difficult.

“It’s going to take quite a bit of work, energy and creativity,” she said. “It’s doable, but it will be different, and it will take some time.”

Kulba lauded Casey for being innovative during the lockdown, using virtual interactions to keep Veterans engaged.

And she said the groundwork Casey has laid will endure.

“That will carry on well beyond my years and anyone else’s,” she said. “She has established such a strong, strong program.”

If the Veterans had their way, Casey wouldn’t be going anywhere.

“We’re going to kidnap her and chain her to the deck,” Green joked. “If they can clone her, then it’s fine. But she will leave some really big shoes to fill – bigger than Shaq’s.

“She’s a saint. Joyce is the pin that holds everything together. It hurts that she’s leaving. The bottom line is you cannot replace Joyce.”

“It’s heartbreaking,” Currier said. “I’m happy she gets to retire, but nobody can replace her.”

Her colleagues feel the same.

“I’m so sad to see her go,” Lee said. “She is truly the heartbeat of recreation therapy.”

To view a slideshow tribute to Casey, click here.