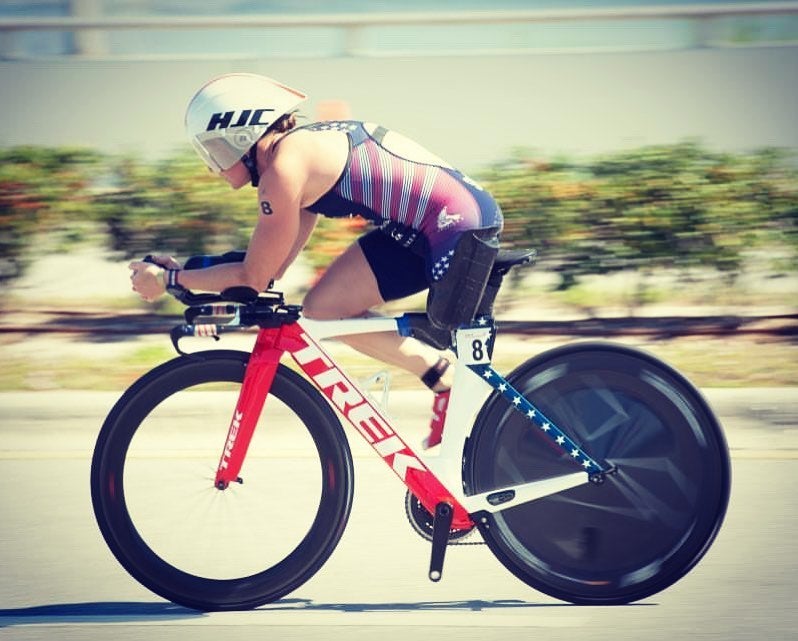 Procter & Gamble launched its Tokyo Olympic Games campaign with two moving short films depicting the beauty of motherhood and being the good in the world. The organization then announced the recipients of their Athletes for Good fund, with one extraordinary Army veteran and Paralympian among them.

United States Army combat veteran Melissa Stockwell was the first female service member to lose a limb in combat. It didn’t slow her down — rather, fueled her to go even harder. “I lost my leg while serving over in Iraq in 2004 from a roadside bomb. So, I was suddenly 24 years old trying to navigate life with one leg,” she explained. Seeing fellow service members around her with what she considered bigger losses and traumas, she decided to count her blessings.

“I really realized how lucky I was and it helped me accept the loss of my leg and move on…that decision helped propel me into a life I could have never imagined otherwise,” Stockwell said.

Move on she did. Stockwell not only pushed through healing and reintegrating into her new life, but then decided to try out for the Paralympics on top of it. Her reasoning? Why not. She learned about the Paralympics after losing her leg and decided she wasn’t going to let her loss stop her from doing anything.

“What greater honor than putting on a USA uniform and representing our country that I had defended in Iraq on the world’s biggest stage,” she explained. “You fast forward a whole bunch of years and I am now a two-time Paralympian going for my third.”

In 2011 she co-founded Dare2tri, a nonprofit dedicated to enhancing the lives of people with disabilities through confidence building and community through sports and wellness. Her selection through the Proctor and Gamble campaign brought a $10,000 grant into the organization.

“I am a very proud athlete with a disability. I am a mother of two and a mother that looks a little bit different but wants to show them it doesn’t matter what you look like. You can still get out there and reach for your dreams and do the things you want to do,” Stockwell explained. In 2016, she earned a Bronze Medal in the Paratriathlon. “I want to teach them to be strong, kind, courageous and have compassion.”

The Procter & Gamble Olympic campaign short film, Love Leads to Good, really struck a chord with Stockwell when she saw it for the first time. “I think any parent out there can relate to it. That visually shows what you want your child to be. Being a mother is the best and hardest job I’ve ever had,” she said. “I’m really proud to partner with P&G [Procter & Gamble] on the campaign going into Tokyo. It’s all about leading with love. We want the world to be inclusive and equitable.”

The excitement of making her way to Tokyo was visible and her joyful energy palpable. Stockwell explained how the entire world had just been through a shared hardship and how coming together for the Olympics will be such an incredible celebration of life and sport. “I am really looking forward to hopefully being back on the podium too,” she said with a smile.

Stockwell remains eternally grateful to the military organizations who stepped forward to support her after she lost her leg. She credits them with getting her out of the hospital in record time and active again. The community of veterans who surrounded her was also a big part of her recovery, she said.

“If the things that I do can influence someone else or inspire someone to do something they never thought possible. If I can inspire a veteran who is suffering from PTS or maybe someone sees my story and thinks she went through it and if she can do it, I can too. If it helps them break out of their shell well those are the things that are the cherry on top,” Stockwell said. “You live the life you love and I am fortunate to live the life I do and hopefully that can carry on to others.”

When asked what she’d want readers to glean from her story, she was direct. “We all go through time and especially in the military. It’s okay to not be okay, ask for help when you need it. Those resources are there but never doubt yourself. Never think you can’t do something.” Stockwell explained. “Whether you are a wounded veteran or not, get out there and try something before you tell yourself you can’t do it.”