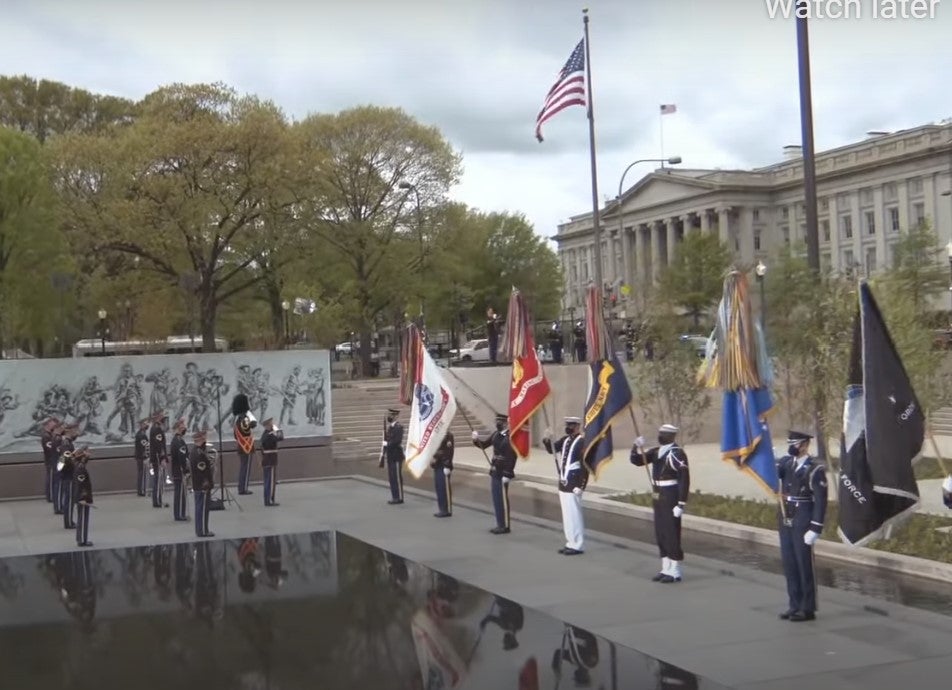 The virtual First Colors event paid homage to World War I Veterans and opened the National World War I Memorial on April 16.

“Let’s remember all that was sacrificed, all that was sanctified, by proud, brave Americans who served in World War I,” Biden said. He added that the war transformed America into a country willing to send military members into harm’s way.

“In some ways, the Great War shifted America’s thinking about ourselves and redefined our place in the world,” he said. “We grappled with what we stood for, what we’re willing to fight and die for to defend, principles of freedom and democracy. We confronted a terrible cost of war in an age of new and deadly technologies. But the commitment and valor of the American women and men who stepped up to serve, whether here at home or on the front lines in Europe, was the same spirt that’s always defined American service members.”

World War I was a national call to service. More than 4.7 million men and women served and 116,516 died.

“In just six months of decisive combat, more would die than in a decade of war in Korea and Vietnam combined, with a higher casualty rate than World War II,” Sinise said.

Army Gen. John J. Pershing led the U.S. troops during World War I, and at the event, his granddaughter, Sandi Pershing, said the memorial will honor Veterans who have long passed. She mentioned that Frank Buckles was the last surviving U.S. Doughboy, passing in 2011 at the age of 110, and that while cameras focused in on her grandfather and people like George S. Patton and Douglas MacArthur, many did not.

“I’m so happy that we’re going to get this built to recognize all the people who nobody has paid any attention to,” Pershing said. “That was just such an altruistic group of people.”

The chairman of the Joint Chiefs of Staff said the memorial is a testament to the American people.

“It is our duty to remember what they fought for and why they fought,” Army Gen. Mark Milley added.

The Harlem Hellfighters of World War I.

At the core of the memorial stands the 58-foot, 38-figure bronze sculpture, A SOLDIER’S JOURNEY. The sculpture – by sculptor Sabin Howard – tells the story of America’s participation in WWI through the eyes of a father who leaves his family to go to war.

Behind the sculpture is the Peace Fountain. Inscribed on the wall with its cascading water is a quote by Archibald MacLeish reminding visitors to remember their sacrifice:

WHETHER OUR LIVES AND OUR DEATHS WERE FOR PEACE AND A NEW HOPE OR FOR NOTHING WE CANNOT SAY; IT IS YOU WHO MUST SAY THIS. THEY SAY: WE LEAVE YOU OUR DEATHS. GIVE THEM THEIR MEANING. WE WERE YOUNG, THEY SAY. WE HAVE DIED. REMEMBER US.

The bronze sculpture A SOLDIER’S JOURNEY is positioned above the waters of a basin and an island-like viewing platform. In the center of that platform is another quarter-inch-deep water scrim.

The conceptual center of the National WWI Memorial is what is known as the Belvedere, an overlook that provides a commanding view of the memorial elements, from the Pershing statue to the Soldier’s Journey sculpture and the flagstaff proudly flying the colors. With a distinctive WWI Victory medal at its center, this area also provides a gently sloping accessibility ramp down to the lower plaza.In addition to all the tributes, the memorial will also have a field of poppies. Following World War I’s end, poppies started growing on the battlefields. The poppy is now an international symbol to recognize those who died in service.

In the northeast corner of the park, the flagstaff stands upon a berm inscribed with a quote by President Woodrow Wilson:

NEVER BEFORE HAVE MEN CROSSED THE SEAS TO A FOREIGN LAND TO FIGHT FOR A CAUSE WHICH THEY DID NOT PRETEND WAS PECULIARLY THEIR OWN, BUT KNEW WAS THE CAUSE OF HUMANITY AND OF MANKIND.

The flag first flew over the U.S. Capitol April 6, 2017, commemorating the 100 year anniversary of when the U.S. entered the war. The American Battle Monuments Commission then flew the flag at nine World War I cemeteries in Europe. Those sites include Lafayette Escadrille Memorial Cemetery, the burial site for American aviators who volunteered even before America declared war. Another site was Aisne-Marne American Cemetery, on the legendary battlefield of Belleau Wood. This site was one of the hardest-fought American victories in the war. Finally, representing the coming home of nearly 2 million soldiers who returned from Europe, the flag returned to the United States to fly at the World War I Museum and Memorial in Kansas City, Missouri.